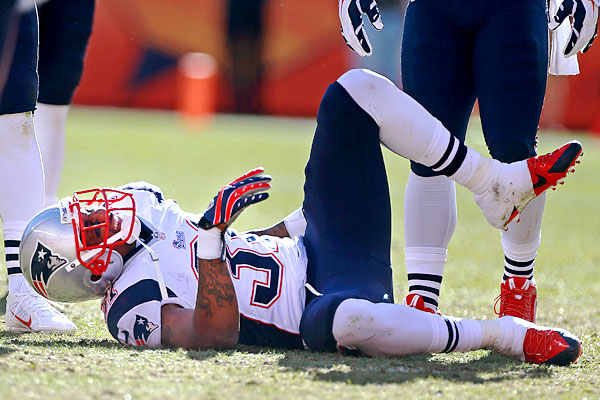 NFL.com - When the Denver Broncos handed $57 million to Aqib Talib, one concern about the six-year deal was the cornerback’s health issues. According to Talib, the hip injury we worried about hasn’t been a problem since he was with the Tampa Bay Buccaneers in 2012. “That was in Tampa, that was the right side,” Talib said per ESPN Boston. “I haven’t had a hip problem since Tampa. The Patriots have their way of reporting stuff, but I haven’t had a hip problem since Tampa. The injury I had was actually a quad injury, it was reported as a hip injury, but that’s how they do things… The injury in the AFC championship, it was just a deep bone bruise. It just swelled up a lot, but no damage, really. It was just a real deep bruise. I just had to do the ice and get my motion back and things like that. It’s perfectly fine now. I’ve been back working out and it’s perfectly fine.” When healthy, Talib is a lockdown corner, but injures have taken a toll on him during the second half of seasons. It’s good that he is healthy in March, but the Broncos need him to be healthy next January.

Wow.  So the Pats rescue Talib off the scrap heap in Tampa, trade for him mid year, give him a place to resurrect his career, re-sign him for 2013 and this is the thanks they get?  He accuses them of making up phony injury reports, which in the NFL is basically a crime punishable by death.  Great.  They carry a guy who’d never been in a playoff game in his career to two Championship Games, he taps out in both of them and still cashes in his year-and-a-half Patriots career for $57 million and rewards them by stabbing them in the back.  Newsflash, Talib, you Hummel: You made your money.  There’s no need to try to hide your chronic condition any more.  You could get a tattoo that looks like a stencil and says “FRAGILE” across your hip and you’d still collect all $26 mil of the guaranteed money you fleeced John Elway out of.  And you don’t help yourself at all by saying you couldn’t finish the Championship Game because you had a bruise.  That’s not a good look for you.  Instead, let’s just all agree that a 5-9, 180 lb white  slot receiver took you out of a chance to win a ring because you’re injury prone and lack toughness.  And stop with the character assassinations already.  @JerryThornton1