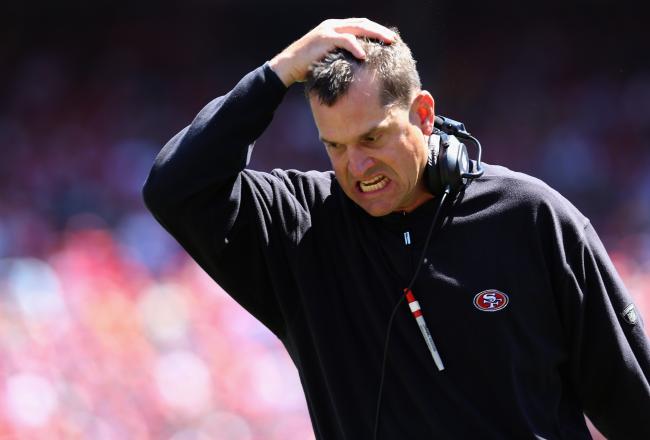 San Fran – Though the noise has died down, the issue of Jim Harbaugh’s future isn’t going away. More than a week after news broke that the Cleveland Browns had inquired about obtaining him and revelations about his strained relations with general manager Trent Baalke made national headlines, the situation remains intriguing and problematic for the 49ers… So there’s no pretending that everything is fine. And from what I’ve been told, the tension isn’t just upstairs in the building. One source with inside knowledge of the team says that Harbaugh’s act has worn thin in the locker room, particularly among some key “face of the 49ers” type players.

But the main reason this matters on a Boston site is because this further validates everything I believe about the Patriots dynasty.  Haters love nothing more than to belittle the Pats because they haven’t won a Super Bowl in nine years as if that makes them just another garden variety team.  Well what’s happening in San Francisco right is what happens all the time with very good-to-great NFL teams.  This shows how hard it is to stay competitive in the league.  And how virtually impossible it is to stay competitive for as long as the Patriots have.  Teams get good.  They hear the praise.  They start thinking their shit don’t stink.  They demand to get paid like the best in the business.  And invariably they either have to break the team up or they end up in Civil War against each other.

The flavors of the month in the NFL right now are the Harbaughs and Pete Carroll.  Well as soon as Baltimore won a title, the bills came due on Joe Flacco, Ed Reed and Anquan Boldin and the next year they went 8-8.  People are talking about Seattle like they’re the next dynasty.  But the fact is they won with two of their three best players, Russell Wilson (3rd rounder in 2012) and Richard Sherman (5th rounder in 2011) on rookie contracts that ate about just over a million bucks of cap space between them. Good luck keeping that arrangement going.  Plus they’ve already had to start jettisoning guys like Red Bryant and Sidney Rice and free agency hasn’t even begun yet.  And now here you’ve got Jim Harbaugh’s ego running amok, pissing everyone off and tearing the Niners apart from within and he’s won less over the last three seasons than Bill Belichick has.  But The Hooded One has mastered the art of sustained, perpetual excellence in a system designed to destroy teams as soon as they get good.  So thanks, Harbaugh for confirming everything I’ve ever believed in.  Have fun alienating your next three teams too while the Pats keep winning, jackass.  @JerryThornton1