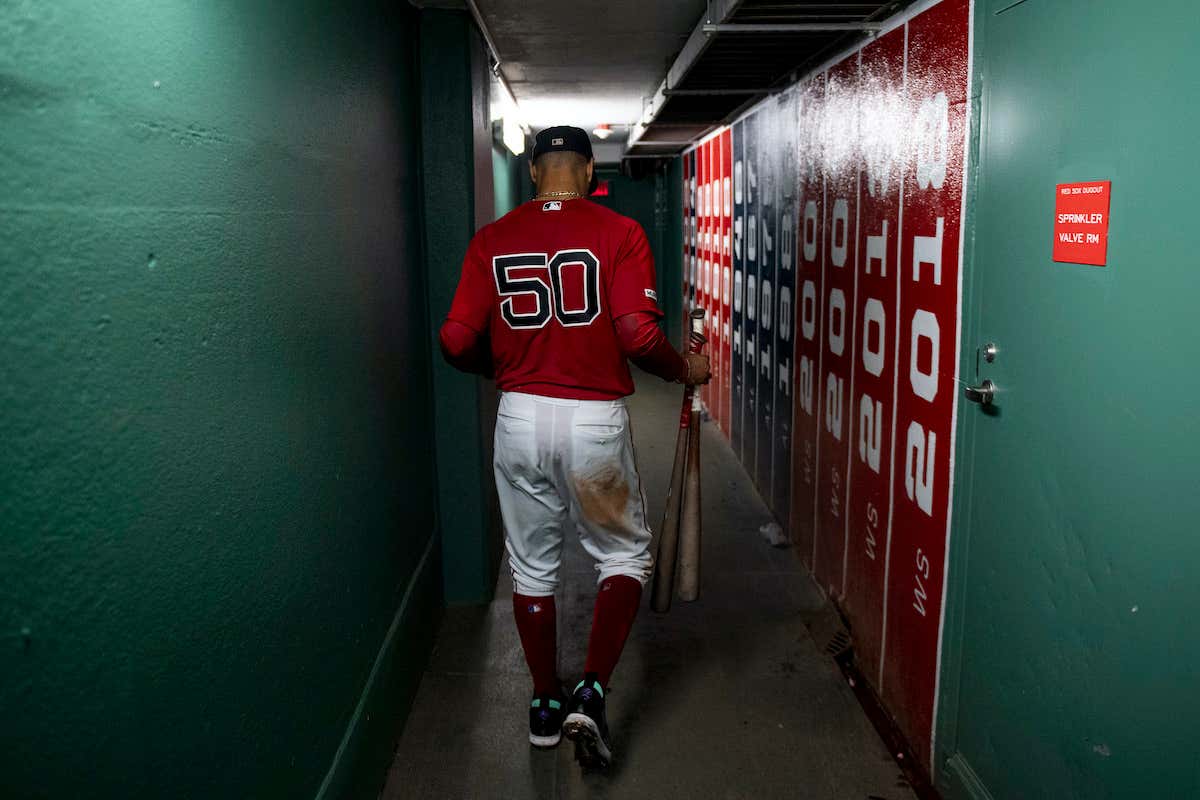 This morning when I woke up, after a night of schooling idiots on Twitter about this impending trade, I had a thought that I hadn’t really considered throughout all of these trade rumors. All due respect to legends like Ted Williams, David Ortiz and Carl Yastrzemski — but had Mookie Betts spent his entire career in Boston, did the Red Sox just trade a man who could’ve ended up being the best statistical player in Red Sox history? Think about it. In terms of importance, it would be hard to touch Ortiz or Williams. But statistically? The way Mookie’s career has been to this point, he’s certainly on a trajectory to end up having a better career than any of the numbers retired at Fenway Park right now. Crazy.

And I know that there will be a lot of anger in the fallout of this trade. I understand it, and I’m with you. I wanted Mookie to be here forever. He’s one of the most talented and dynamic players in baseball, a homegrown talent, an MVP in this league, and a World Series champion. When a team trades away a player, who could be considered the second best position player on planet earth, while said player is also in their prime at 27 years old, it’s going to lead to one question — why?

Well, in the cases of small market teams, like when the Orioles traded Manny Machado to the Dodgers in 2018, the answer is that the losing team simply could not afford to pay this franchise player what they’re worth. The Red Sox can afford to pay Mookie, but they’re simply so far apart on what the team has offered and what the player is in search of. Like, a hundred million dollars apart. Perhaps more.

So, is it the player’s fault? Was Mookie traded away because he’s greedy? Fuck no. And I won’t let that narrative stand. I will never understand fans who side with ownership during these situations. John Henry is a billionaire. Major League Baseball is a multi-BILLION dollar industry. The players, especially the best of the best, deserve what they’re actually worth and what the market dictates. Economics 101. To the “how much money does he really need?!” crowd, these are the people who simply can’t fathom someone being so good at what they do that $300 million isn’t considered fair pay. With Betts, it’s just factually not fair pay.

The total dollars is what shocked fans. Being off by north of a hundred million dollars is what blows peoples’ minds. The years is what I have an issue with. The money year over year? Not an issue for me. He’s worth that. But a 12-year deal? That’s a huge commitment, signing a player through their age-39 season at that dollar amount per year. Quite frankly, it’s irresponsible. That’s why my point all along has been, wait until he’s a free agent then. Trade him now because you cant sign him, get something for him, and then let him reach free agency where I’d imagine most other teams who can actually afford him will also balk at the idea of signing him through his age-39 season at an average annual value of $35 million.

But back to the crowd who will inevitably call Betts “greedy” in all of this. Betts just wanted market value. The same way that you do at your job. The aforementioned Machado got $300 million, and he’s objectively not better than Betts. Is $300 million enough to live comfortably forever and ever? Obviously. But why should Betts take less than what he’s worth? That doesn’t save you reading this money. It just keeps money in the pockets of a multi-billionaire owner. Yes, John Henry is worth close to three billion dollars.

Why would anybody take less than what they’re worth to make their employer even more rich than they already are? It’s the players who are putting money in the owners’ pockets in the first place. They deserve their cut. If the owner of the company you worked for offered you $250,000 a year, are you going to say, “Well, I can live comfortably off of $90,000 a year, so I’ll just take that. You keep the rest,” while they count their millions. Of course not. That’s simply what’s happening here on a much grander scale.

Have players in the past signed for less than what they’re worth to stay where they’re at? Absolutely. Dustin Pedroia did it, and Xander Bogaerts just did it last winter. In fairness to both of those players, who were both elite at their positions at the time of their extensions, neither one of them had the case for being the second best player in the league. That’s the difference here. There have also been comparisons to Tom Brady taking less in New England with the Patriots to win multiple Super Bowls. Well, Tom Brady’s wife has a net worth of $360 million, he made a shit ton of money on the side through his ad deals, and there’s this thing called a “salary cap” in the NFL. That doesn’t exist in Major League Baseball.

There’s a weird dynamic in passionate sports cities where fans play the loyalty card with their favorite players. If you don’t take less to stay, then you’re not loyal. Think of it this way — if Mookie Betts were drafted by the Indians, played his whole career there to this point, and he put up the exact same numbers, won a World Series there, an MVP there and all that, then you’d want the Red Sox to pay him as a free agent, whatever that cost may be, because the Red Sox are annually one of the highest-spending teams in baseball, if not the highest. But because all of that happened in Boston, he should take less money to continue playing for your team? That’s not how that should ever work.

Somebody on Twitter last night reminded me of a note from David Ortiz’s book where Ortiz talked about how the Red Sox will pay whatever amount is necessary for players outside of the organization to come play in Boston, but when it comes time to pay their own players who have proven that they can perform in Boston, the money doesn’t flow nearly the same. That’s not how it should be, and that’s why Mookie Betts will be wearing another uniform in 2020. Again, I’m not giving him 12 years, but he is absolutely worth $35 million a year, not $30 million.

Perhaps it’s thinking too far ahead at this point, but I do have hope that the Red Sox will pursue Betts as a free agent after the 2020 season. Circling back to the point that I made earlier, Betts can ask for whatever he wants right now and aim high because he’s only allowed to negotiate with one team. When he becomes a free agent and starts fielding offers from any of the 30 teams in the league, both Betts and the Red Sox will have a much better understanding of what the actual framework of a Betts contract might look like.

But that’s a year from now. For right now, the Red Sox are a team that just traded their best player, one of the best players in the league, they’re without a manager, and they might also be trading one of their frontline starting pitchers. It goes without saying that 2020 is more than likely going to be a tough pill to swallow, as the franchise is still paying the cost of winning a championship in 2018, because we can’t ignore that a Betts trade, and potentially a David Price trade, came to fruition as a means to get under the luxury tax to avoid having to pay $100 million in penalties, while also having draft picks dropped. On top of that, they could also be looking at a max fine of $5 million and draft picks taken away as a result of the league’s findings throughout their investigation of the sign-stealing allegations in 2018.

It ain’t great. I’m not happy. I’m sure you aren’t, either. But this is just the reality of the situation right now. The Red Sox might’ve just traded away a player who legitimately could’ve gone on to become the best player in the history of the franchise. And that fucking sucks.

PS -- Everything written above was typed out and ready to go this past Friday. We all knew that it was coming, so I wanted to have something ready to go when the news came down. My thoughts on the Mookie Betts situation haven't changed, but now there's a new wrinkle to all of this with the inclusion of David Price in the trade.

What a polarizing legacy Price will leave behind in Boston. I mean, on a personal level, he was my guy. When he signed with the Red Sox, I was there at the introductory press conference and even got a shout out from him, which was probably my first surreal, holy shit moment at Barstool. But then the baseball games started. The media hounds were out in full force for a pitcher who was never going to live up to his contract. Not because of his talent level. The man has a Cy Young award in his trophy case. It was because the Red Sox had no other choice than to make Price an offer he couldn't refuse. It was either that, or he was going to happily sign with the Cardinals, leaving the Red Sox with no ace pitcher. Again.

For all the downs during the Price Era in Boston, and there were some big ones including postseason failures, Yankee Stadium beatings and the beef with Dennis Eckersley -- the highs were worth all of that. Watching David Price overcome his postseason demons in 2018, pitching the ALCS clinching game in Houston, and then again in the clinching game in LA to win the World Series. It was awesome. It was the best of times, and it was the worst of times. But I'll always remember the best times, because Price told Red Sox fans he was saving all of his postseason wins for the Red Sox...and then he delivered. I wish him nothing but the best in LA.