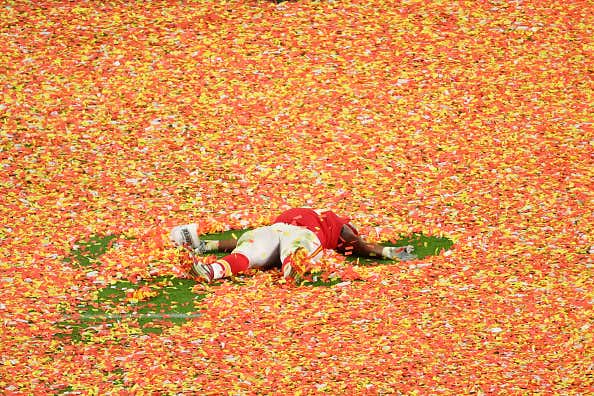 We've made a lot of important advancements as a collective race of human beings. Technology gets better seemingly by the day. Medicine is getting stronger and stronger as we step forward in the future. And yet, something so simple, something so obvious, has slipped through the cracks of society yet again. The day after the Super Bowl remains nothing more than "Monday."

It doesn't make any sense. It's dumb. And bad. I'm far from the first person to make this argument, which is another problem unto itself. How many goddamn people need to raise this issue before we do something about it? It's an entire night where the whole country sits on our asses, watches football and some sort of concert, and gets our minds raided by every major corporation on the planet. Tomorrow should be a spending holiday a la Black Friday after Thanksgiving. Whole country at home, commercials fresh on their minds, Amazon 20% off, what's not to love about this? Just move Presidents' Day up, who gives a shit.

Alright, you think the entire country getting the day off is excessive fine. You're an asshole who hates the common man and his ongoing war against "the Man" but alright, whatever. What if it's a built in bonus for the winning city? Tomorrow in Kansas City the city shuts down like a weather emergency was called by the Governor. The players get bonuses, rings, glory, points towards Hall of Fame résumés, the fans get a day off. I don't know if I need to call NASA or whatever government agency to get the paperwork started on these genius ideas but once we get the ball rolling I don't see any potential pushback. Maybe the lobbyists on behalf of Big Monday have deeper pockets than I'm giving them credit for but I don't see it. Nobody likes Mondays, removing another one from the calendar shouldn't be too difficult. Hopefully this was the last Super Bowl without an accompanying holiday on the other side of it. If all goes according to plan we will be living a full step closer to utopia a year from now.