I've watched this brawl no less than 40 times now and each time there's something different that pops up. Nobody is hurt, so the good news is we can make a bunch of jokes because some of these images - most notably the fact Silvio De Sousa picked up a goddamn stool - are hilarious. It's just power hitter after power hitting hitting the screen and the fact that we have different angles let us see all of them in their glory. Anyway, these are my favorites. 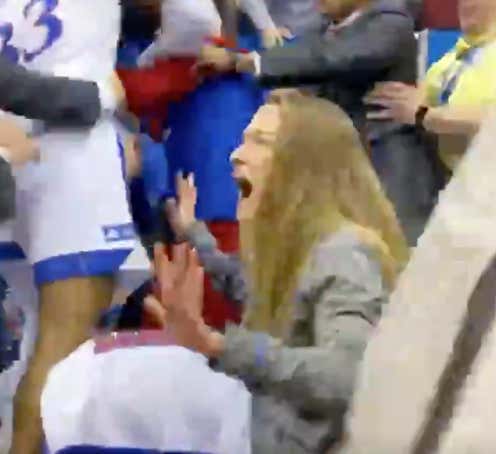 A classic in any fight is the person, typically a significant other of one involved, screaming 'STOP' at their top of their lungs with some slight tears. This time it's someone who I believe is associated with the cheerleading squad. She's doing her best to break it up by using her words. When you watch the video you can actually hear the STOP scream. 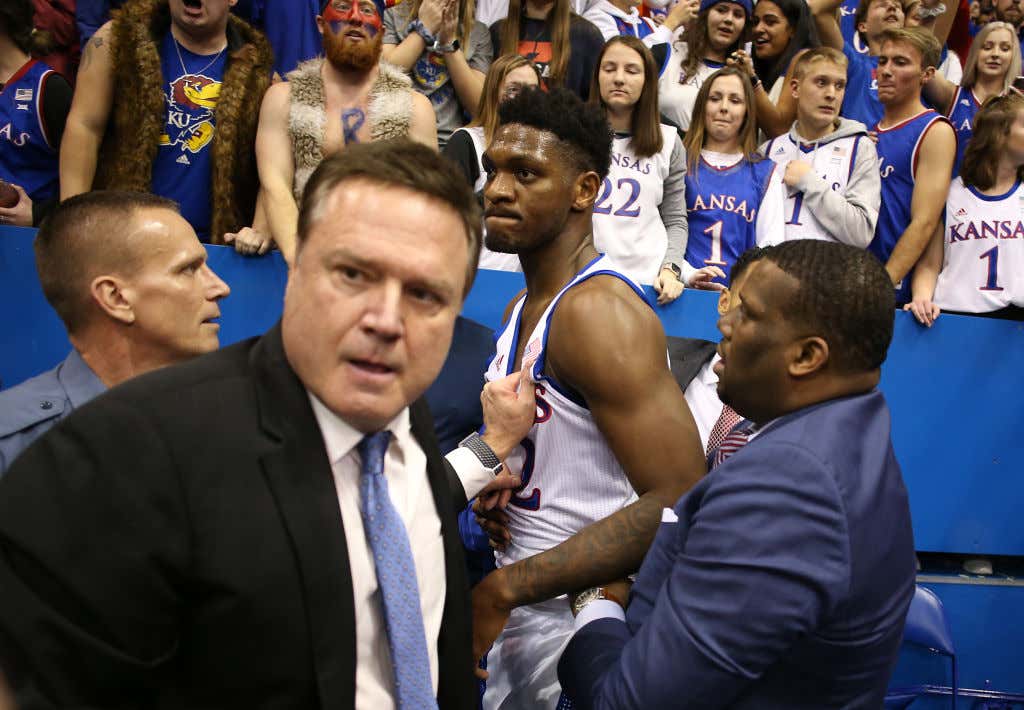 One of my favorite rumors in college basketball is Bill Self having a toupee. It was on full display last night as he stormed to get his guys out of there and did a strong pissed off dad impression. The hair was ready to be all over the place as he was hoofing it to the baseline. You can tell he just realized the (alleged) money he paid De Sousa's family and handler probably just went to shit as a big time suspension is coming. That's a bad investment. 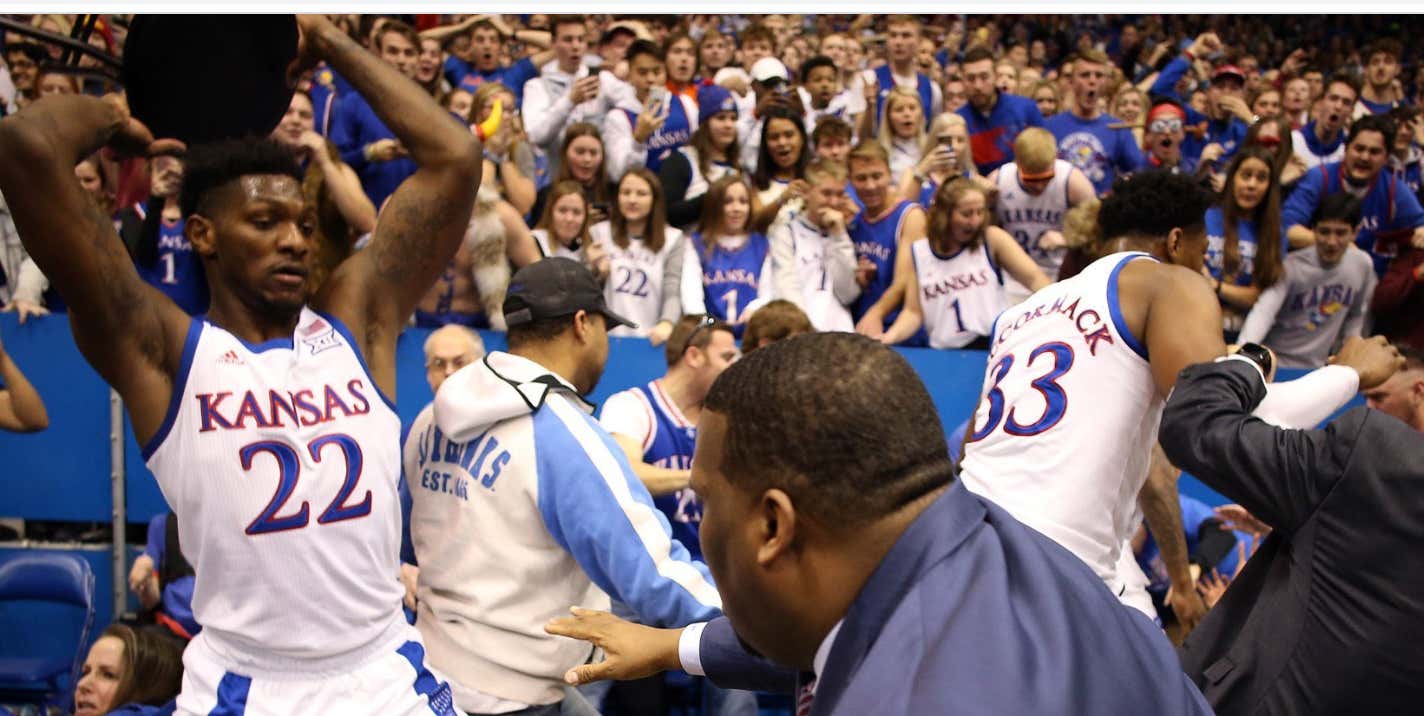 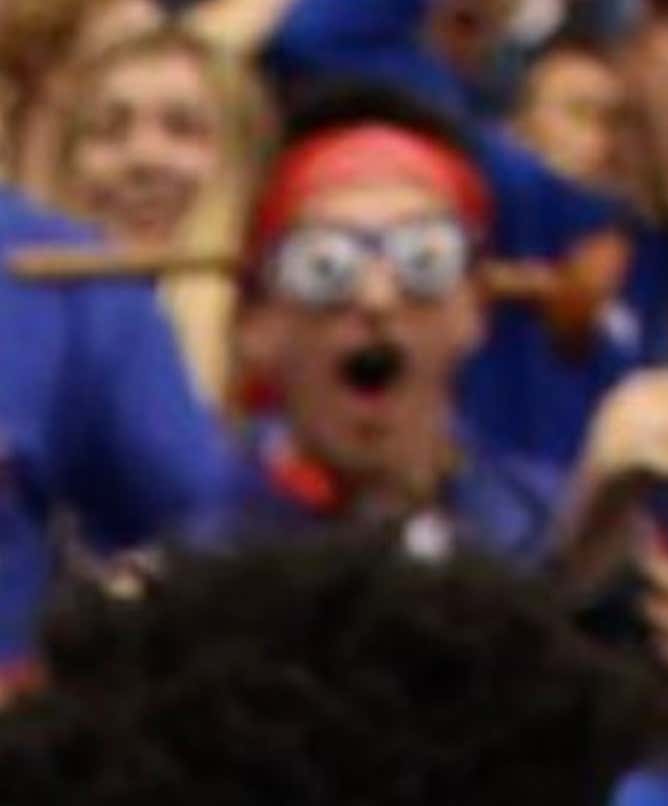 Crazy eyes. Plunger through the head. Classic. That's why people say Phog Allen is a bucket list place to watch a game.

She really became the star early in the fight here. People on Twitter have been sharing this picture and talking about her reaction. Of course we had people freaking out saying that this is why you don't go to games - as if someone trying to attack another person with a stool is standard behavior. There's a lot going on in that picture. You have the guy reaching for the chair. The fans. But, it's the woman on the ground and her facial expression that won over Twitter.

Who is this guy? Where is he coming from? All I know is this is an A+ attack from the top rope. He just lays out coming out of nowhere. It's part of what made this brawl so hilarious. Just a random frog splash out of nowhere and hopping up like it's nothing. 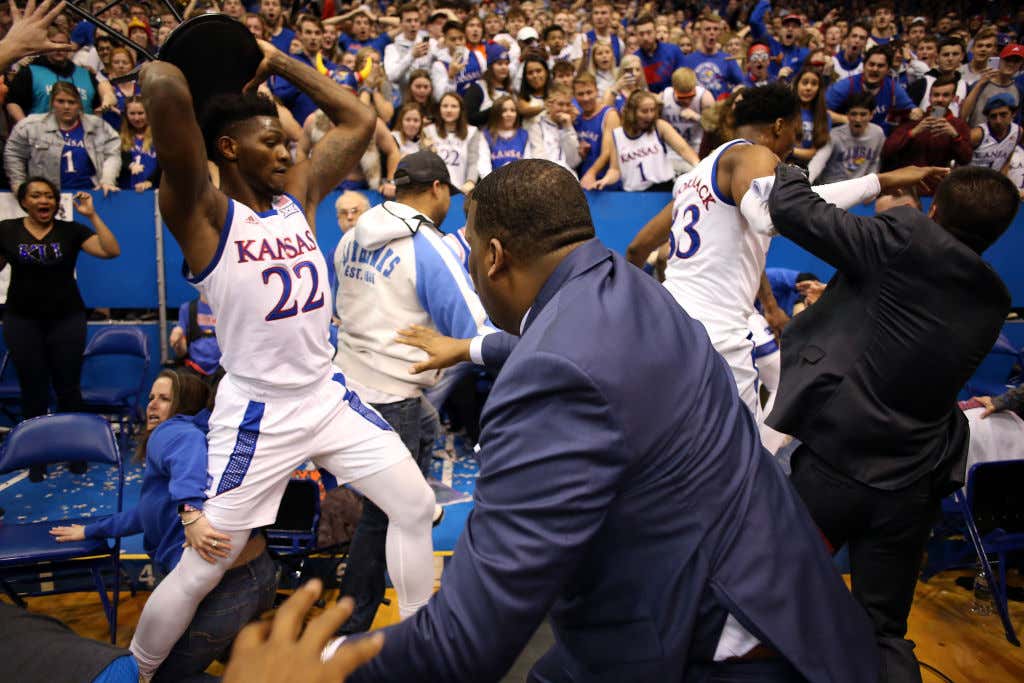 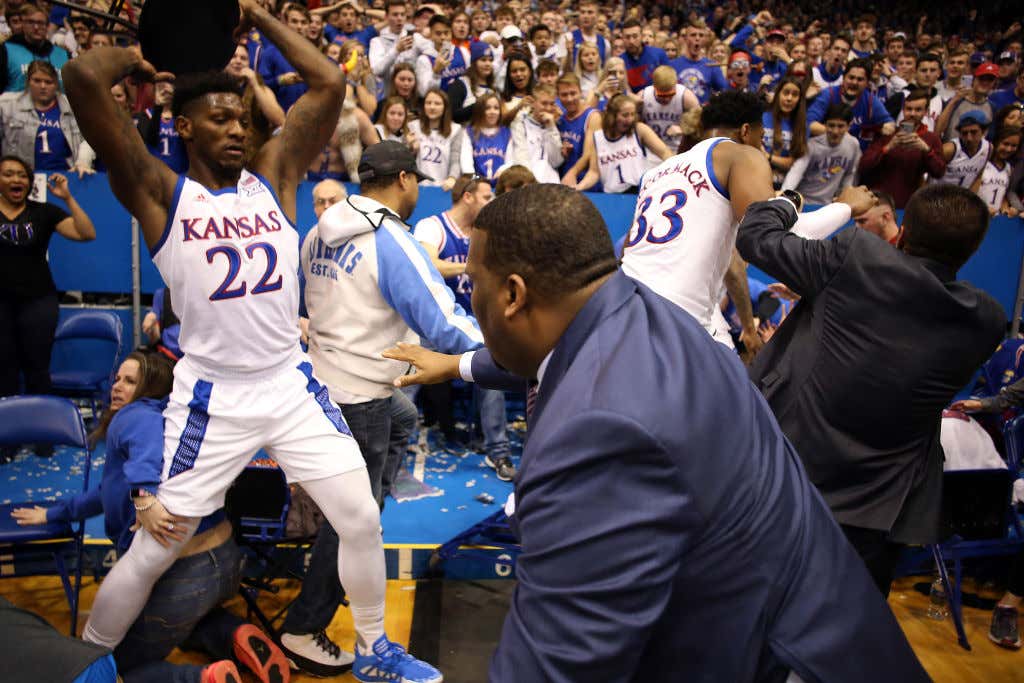 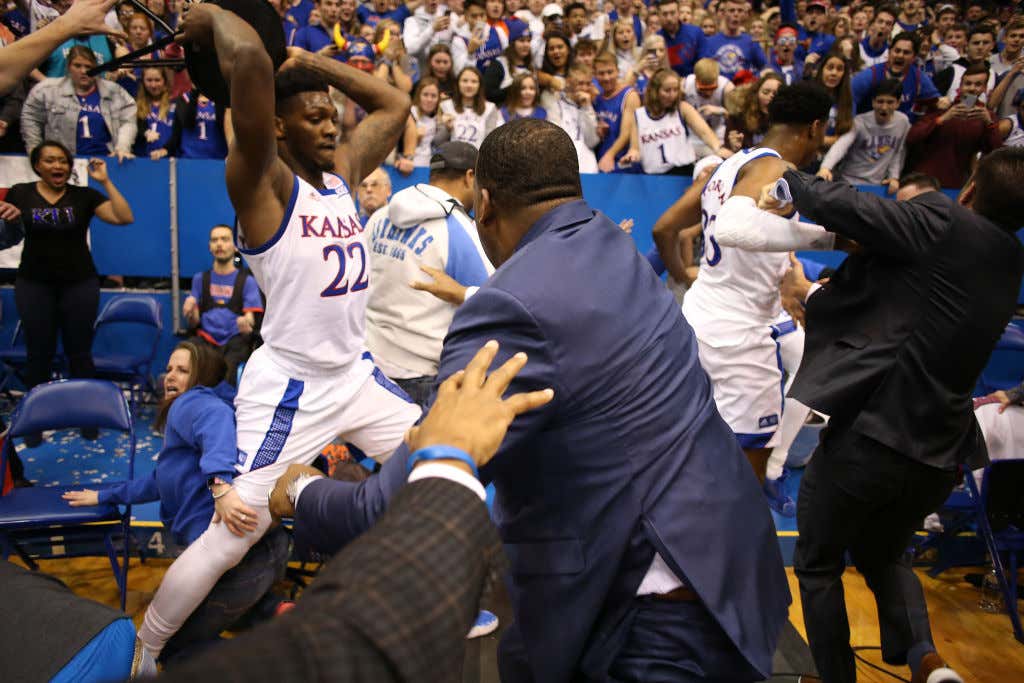 Listen, without De Sousa picking up a stool like it's an extreme rules fight, it's just a lot of pushes and some missed punches. But the fact that we have these images it makes it 1,000 times funnier. The moment everyone realized that he picked up a stool is why Twitter is great. I've never seen something like that, even if he didn't hit anyone. When there's a basketball fight there are typically just punches and hold me backs.

Never break character. Never, ever break character and that's exactly what the Jayhawk did. He just went surrender cobra and disappointed bird in the corner. I can't stop laughing at this person grabbing their gigantic bird head in disbelief.

2. Cheerleaders holding the cop and players back 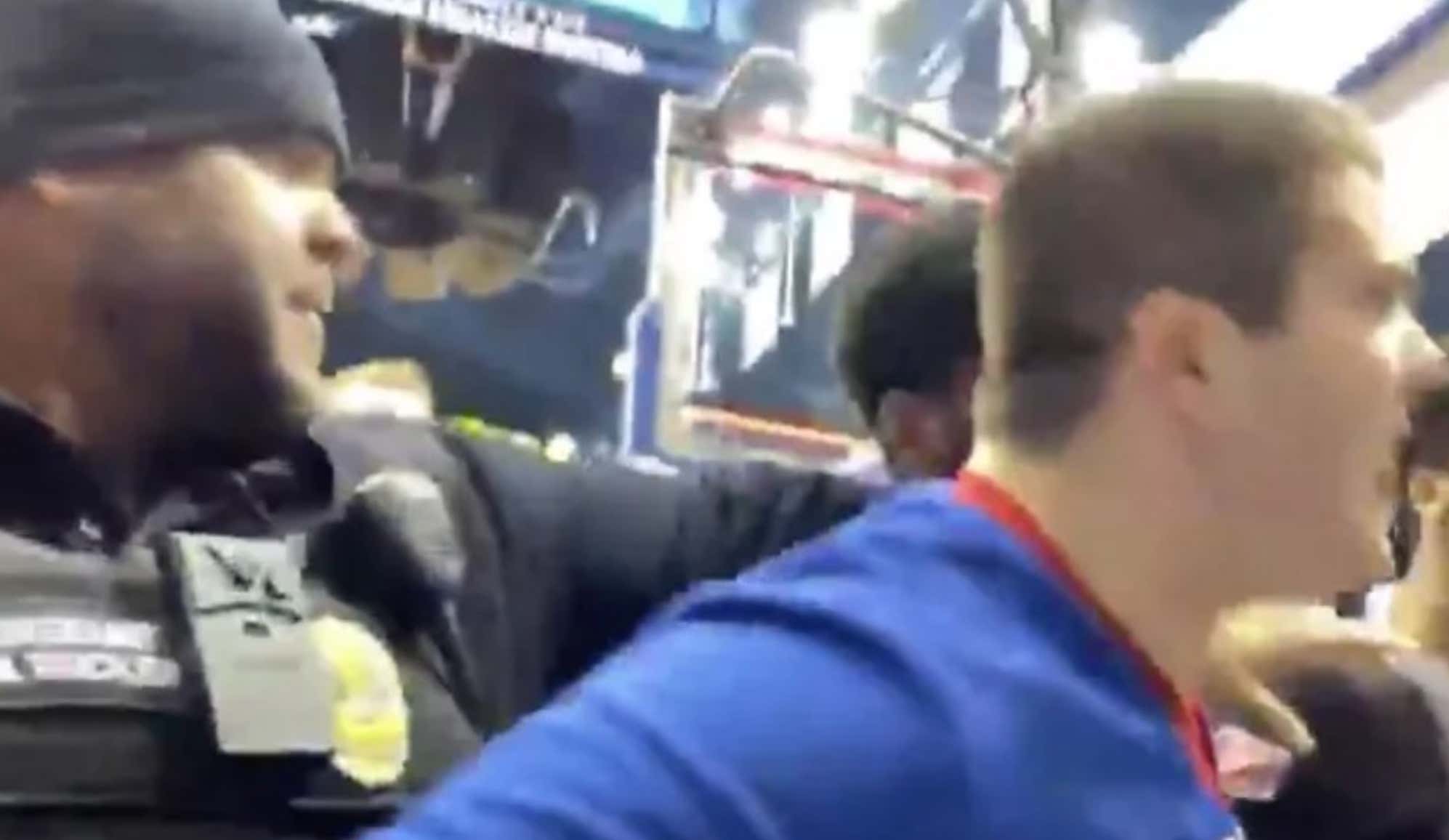 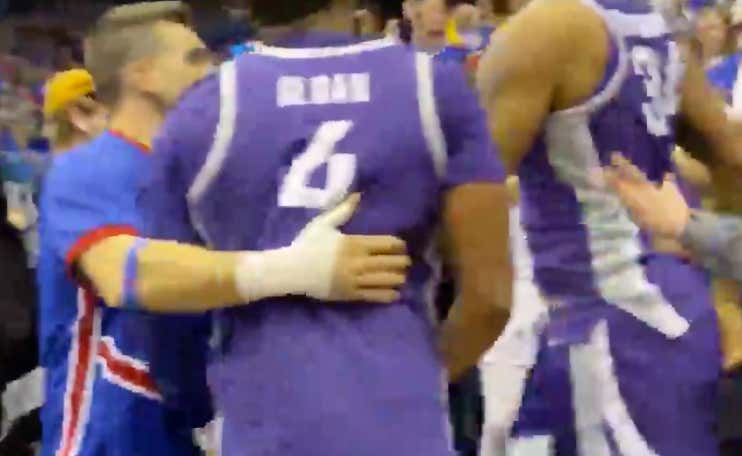 Shout out Jerrance Howard, the Kansas assistant coach. Why does he win here? Because we can make fun of this all instead of doing stupid takes. It was a pro move and a hell of an athletic move to get a paw on that stool. So shout out Jerrance so we can make jokes and laugh our ass off at this instead of screaming about criminal activity. It's a brawl. Big fucking deal. No one was hurt.