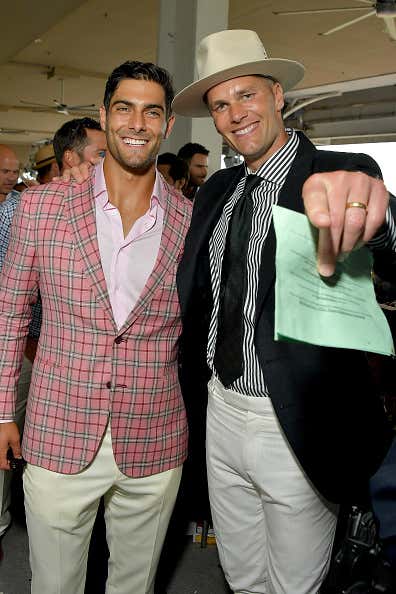 Before we begin, I want to be clear about one thing: I'm a big Jimmy Garoppolo fan. Big fan. In his brief Patriots career, he was handsome, worked hard, was attractive, was a good teammate, was easy on the eyes, earned himself a huge payday and was dreamy as all hell. He still is all of those things. Besides, what is not to admire about a man who becomes one of the biggest stars in a city filled with single females and wastes no time hooking up with a 42-year-old adult film star?

And so I want to celebrate his success to whatever extent I can. A second round pick out of Eastern Illinois is in the Super Bowl in just his third season as a starter, and his first complete season. That's a reason to rejoice. There's just one thing working against the enjoyment of this moment.

We are now just two years removed from the instantly legendary hatchet piece on the Patriots by Seth Wickersham on ESPN.  The one with all the talk about a "rift" in the organization. About Tom Brady being aloof and so out of touch with his teammates that they were forced to call him "sir" like he'd been knighted by the queen. About how Brady resented Bill Belichick for kicking Alex Guerrero off the team plane. How he was so insecure about Jimmy G's presence that he banned him from TB12 Fitness. And how Belichick had had it with Mr. Kraft and his constant buttinskiing into his business and was looking to jump ship as soon as he could.

The article was filled with factual inaccuracies. Including the business of Garoppolo and TB12, as he had a key card and was seen in there all the time. There was one story about a secret meeting between Belichick and Roger Goodell that was denied by the Commissioner's office itself, which has never shown a lot of interest in doing PR work for the Patriots. But still, the article was taken as settled science by most of the population of radio and TV meatwhistles and the naive sheeple in their audiences. Even as the team proceeded to make it to two Super Bowls and hang a banner.

But there's one part of the mythos of this thing that has endured above all others: And it's the idea that Brady, in his paranoia about having Jimmy G as his heir apparent, went over Belichick's head and told the Krafts to eliminate the threat. Mr. Kraft in turn, ordered a Code Red. Belichick was called into the owner's office and forced him against his will to trade the player he knew was ready to step in and lead his team to Super Bowls for the next 20 years. That section of an agenda driven, grossly inaccurate work of historical fiction, has lived on as gospel. It's been repeated so often that almost no one questions it. Even though you're lucky if the imbecile you're talking to remembers what the original source is. And in the 2+ years since, it hasn't been confirmed by a single person who was actually involved. It's the Big Lie. Repeat it often enough and the public will swallow it like it's truth.

So let's take a look at the Jimmy G trade for the thousandth time. Because if Schoolhouse Rock taught us anything, it's that learning about history can be fun.

It was the trading deadline in the middle of the 2017 season. And Belichick had three choices. Exactly three. His decision was ternary:

1) Lose Jimmy Garoppolo to free agency after the season.

2) Release Brady at the end of the season, sign Jimmy G to the richest deal ever and make him the 2018 starter.

Repeat after me for as many times as it takes for this to sink in: There was no fourth option. You couldn't keep Garoppolo by signing him to an under market deal to be a backup when he was guaranteed to be a starter making north of $30 million. You couldn't Franchise him, making him the highest paid player on the team because it's madness. You'd have to release a handful of starters just to pay a guy to hold a blue Microsoft tablet all year. Not to mention it would breed resentment and create a line of agents outside Belichick's office demanding new deals. Saying "Well they could've figured out a way to keep him" is worse than being disingenuous, it's a flat out lie.

The only way Garoppolo would've made the 2018 Patriots roster was as the starting quarterback. Meaning it would've meant releasing Brady, who at the time of the trade had led the Patriots to six Super Bowls. While Garoppolo had played six quarters of NFL football. It would have been nothing less than the biggest, most reckless personnel gamble in the history of team sports.

--Take them to three Super Bowls.

--Lead a come from behind win at Kansas City in the AFC championship game, out dueling the league MVP while throwing for 180 yards in the 4th quarter and overtime, while converting three 3rd & 10s in OT for the win.

--Put up two banners that will be there until the sun goes nova.

--Not miss a down of football due to injury while Garoppolo has missed 13 games.

And they would've had to transition from Brady to Jimmy G precisely after that Super Bowl with the 466 yards and 25-point comeback.

If, by some miracle the rumor that Belichick was forced to make that trade against his will is true, then he should drop to his knees every night and thank the ancient Croatian gods who created him out of pigskin, stardust and pure intellect that it happened. No matter what happens in 2020 and beyond. This Dynasty's success is measured in championships, not 12-4 seasons and playoff one & dones. Just look at this year.

As far as the trade itself, the argument against it goes that Belichick hastily made a deal. That he couldn't be bothered to call around and just took the first offer he got. Some suggest he went so far as to take 50 cents on the Garoppolo dollar, just out of pure spite. As a big eff you to his meddling boss.

The conventional wisdom is that Cleveland was offering "multiple first round picks." When the truth is, not only have those reports never been confirmed, we know the opposite is true. The Browns coaches were in fact livid that the personnel staff never got into the bidding and all went home at 5 pm at the trading deadline.

Ultimately the deal that got done between Belichick and John Lynch was for a second rounder, 43rd overall. We'll never be able to assess the haul in an apples-to-apples way because, in typical Patriots fashion, they've made a couple of dozen trades with it since. Jason Bateman in "Ozark" couldn't launder cartel drug money the way Belichick has turned over that pick. But what they currently have to show for it is:

--The Broncos sixth round pick.

Argue they maybe still could've gotten more in return and flipped the pick for more, and you might have a valid point. But you'd be ignoring the fact that San Francisco offered the one thing no other franchise in the league could: A backup quarterback the Patriots trusted. Not only had Brian Hoyer been in their system and therefore could step right in as the McOffense's spare tire if Brady happened to run over a nail, he was someone they knew they could count on to play the most underappreciated role of the backup quarterback. To a man, the 2018 Patriots credited Hoyer for the way he led the scout team, prepping the defense for Jared Goff and the 11th highest scoring offense in league history:

So mourn the loss of Jimmy Garoppolo all you want. Say you like the guy and it would've been fun to have him leading the Patriots into the 2020s and beyond. Just don't for one hot second claim that trading him - hard as that might have been - didn't work out for the Pats in a huge way. Because calling the move anything but a massive success is a bold faced lie.