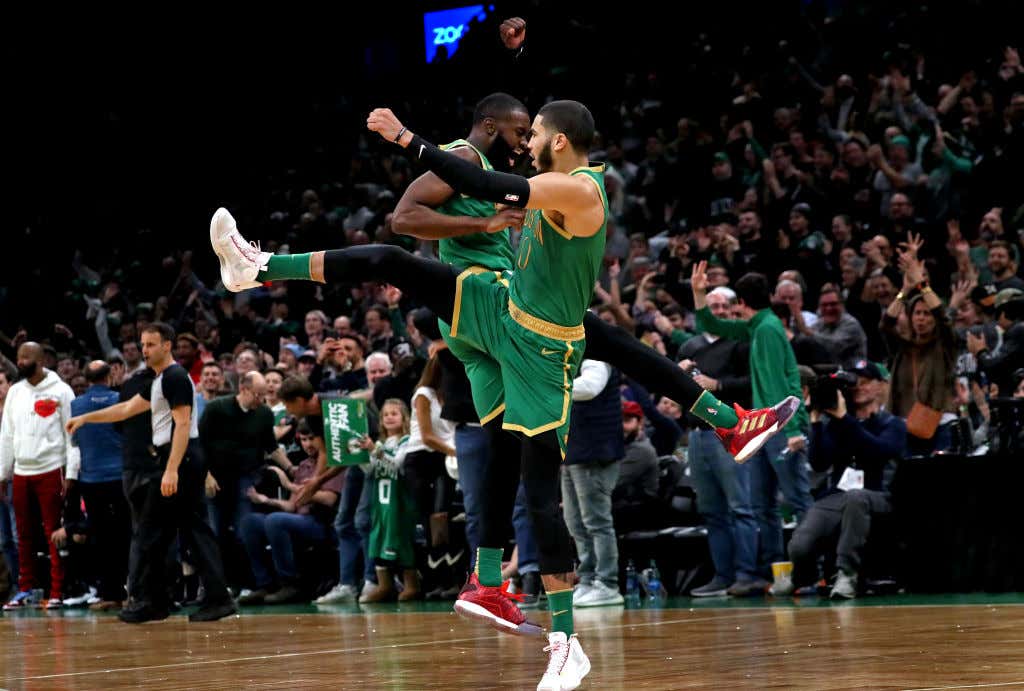 The beauty of this time of year is we have enough of a sample size to start to form some legit opinions of this team. I do find it funny that when things are going well people love to scream "sample size!" as a way to discredit what we are seeing, but when things are a disaster for that same sample size that is truly who they are and what will dictate their postseason success. The truth is things are probably somewhere in the middle. The beauty of this blog is there is nothing subjective about it. There is no arguing any of the 41 facts that you are about to read because they are....facts. You don't have to like them, you don't have to accept them, but they are what they are both good and bad. Some of these surprised me, there were definitely some that angered me, but that's pretty normal with this team. How would I describe the first half of the Celtics season? Well...

2. Despite it looking beyond pathetic for the past two weeks, the Celts currently have the 6th best offense in the NBA. Their 111.5 rating is the highest it's ever been under Brad, and marks the 4 time in 7 seasons he's had a top 10 offense. Considering the Celts have never been able to really shoot for what feels like his entire tenure, this always surprises me.

3. The Celtics are 1 of 2 teams in the entire NBA with three players averaging at least 20 points per game. The only other team to achieve that is the Clippers.

4. Against the top 3 seeds from each conference, the Celtics sit at 5-4. They are currently 7-8 against teams over .500, which is the second most losses among the top 4 seeds in the East.

5. They also have the second most losses against teams under .500 among the top 4 in the East with 6.

6. Both Jaylen Brown and Jayson Tatum are shooting over 51% from the floor and 40% from three in clutch situations while averaging the most clutch minutes on the team.

7. After starting the first month of the season shooting just 50% in the restrictive area, Jayson Tatum has jumped to 64.4% since Thanksgiving.

11. Marcus Smart's 75 3PM are third on the team and more than Jaylen Brown, despite playing 3 fewer games. He has over double the amount of Gordon Hayward while playing only 7 more games. His 35.6% from three is essentially the same as Jayson Tatum (35.6%).

13. The Celtics rank 3rd in unassisted 3PM with 28.9% of their threes coming without an assist. Only Portland and Houston rank higher.

22. Jayson Tatum is 8th in the NBA in real plus/minus. Last year he finished the season 82nd.

23. With his 20/6 averages shooting 49% from the field, only LeBron/Giannis/AD/KAT are currently putting up the production we've seen from Jaylen Brown this season.

24. The Celtics offense and defense drops when Marcus Smart is on the floor. Offensive rating dips 4.1 points and Drtg increases 1.1 points

29. Opponents are shooting 51% while being guarded by Kemba Walker, which is 7% points better than their overall FG of 44%. That's the worst of all regular rotation players.

32. The Celtics have the 2nd most wins in the East in games decided by 10 points or more.

34. Jaylen Brown leads all regular rotation players in points per touch at 0.409. HIs 48.8 touches per game is fewer than Kemba, Jayson Tatum, Marcus Smart, and Gordon Hayward.

35. The lineup of Kemba/Jaylen/Hayward/Tatum/Theis has played the second most minutes together and is outscoring opponents by +10.5 points. Swapping Hayward for Smart sees that number drop to +6.8

37. Jayson Tatum leads the team in defensive win shares at 2.2. The next closes is Jaylen Brown at 1.6

41. So far in January the Celtics are allowing 112.6 points a game, which is more than 10 points from what they gave up in December and 6 points more than their season average. They are 4-6.

So what does all this mean? Well, recent events are for sure going to make things seem much worse than they actually are when looking at the bigger picture. On the whole, a 54 win pace, in contention for a top 2 seed and the Jays flourishing combined with All Star Kemba production is pretty much better than we all thought heading into the year. It's not all good, and it's important to acknowledge where this team has sucked ass, but through 41 games there are certainly worse spots to be in.