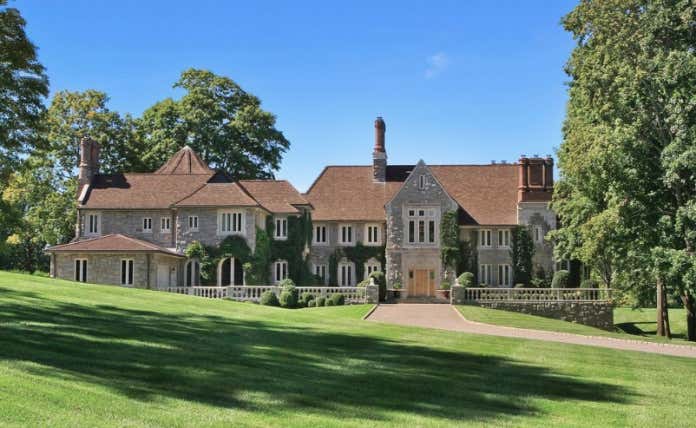 You may recall that a few months ago there was wholesale panic throughout the land because Tom Brady and Gisele put their house in Brookline up for sale:

Which of course could only mean one thing. The Brady Bundch are leaving the area, never to return. He’s taking his talents to LA. Or Las Vegas. Tampa, perhaps. Maybe Carolina. Or following his boy Josh McDaniels to Cleveland. Oh, right.

Well this morning the emergency sirens have sounded once again and you’re advised to get to your nearest underground shelter. Because reportedly today was moving day. And here’s all the information you need on the place they’ve moved to:

First of all, I’m going to strongly recommend that you don’t use this publicly-listed information for stalking purposes. That’s not only wrong and a violation of privacy, it’s against the law. But if you do, be sure and say hi. I’ll be the one going through the trash looking for bits of hair and clothing so I can complete the Brady Husband I’m making out of sticks in the woods behind my house. Also, don’t judge me.

Second, I think of all of Tom & Gisele’s myriad of skill sets, I think their most underrated is their talent at being real estate moguls. I’ve been told they bought that land and built the house in Brookline for $7 million, and it’s currently being listed for just under $34 million. Remember that place in LA they bought for $20 million and owned for like two weeks? The mansion with the castle moat around it? They flipped that to Jay-Z for $40 million. If, as reported, they closed on this one for $9 million, in about four years it’ll be worth more than Vatican City.

Third, I might not be Ken Jennings when it comes to geography, but I know where Greenwich is located. If you take this as some sort of proof he’s leaving the Patriots, you need to put away the GPS for a couple of days and pick up a map: 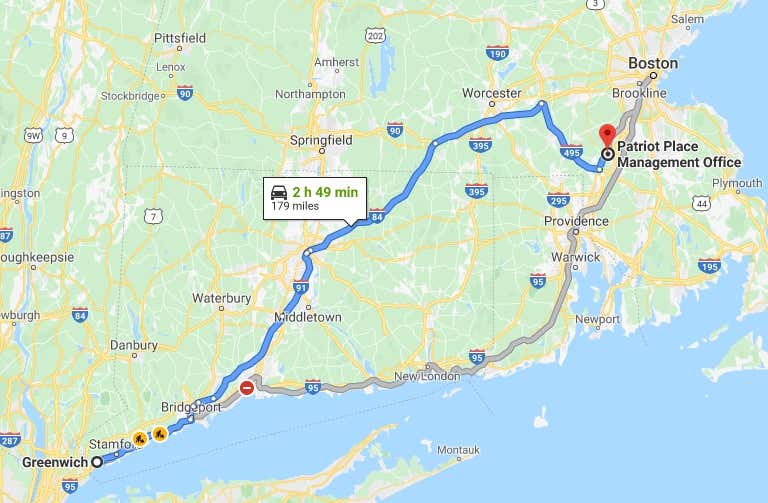 Which brings me to the report this morning:

Source – “The Brady suite at Gillette Stadium where (Gisele Bundchen) has been known to watch her husband play football has been cleaned out,” [The Greg Hill Show] said.

In addition, Hill said Brady and his family have already moved out of their Brookline, Massachusetts home and moved into their recently purchased home in Greenwich, Connecticut.

The Brady suite at Gillette has been cleaned out! Cleaned in a way that it’s never been cleaned before! That can only mean he’s going to be playing for the Chargers, I guess?

No, seriously, what is it supposed to mean? I mean, what’s in there that he used to leave all summer? Coffee mugs that say “World’s Best QB”? Star Wars cups for the kids? Was Gisele keeping changes of clothes there? Did they clear out priceless family heirlooms and all the valuables stashed in the secret wall safe? Or did they clear out to the bare walls, hauling out a sectional sofa with stowaway cooler and reclining chairs with vibrating massage and heat?

I guess the thing we’re supposed to takeaway from this is that they never took stuff home at the end of the season, when I can’t imagine that anyone has ever kept track what they ever took out of there at the end of the season. But this time they stripped the place. And it looks like the Who’s house after the Grinch left, just nothing but a few wires coming out of the wall.

The bottom line is that this is a Nothingburger Royale with Cheese. He’s moved his family from one part of New England to another part of New England in a savvy real estate transaction. And when Bill Belichick makes the decision that 43-year-old Tom Brady affords him the best opportunity to put a 7th banner up, the contents of the private suite underneath those banners is not going to enter into his thinking one goddamned bit.