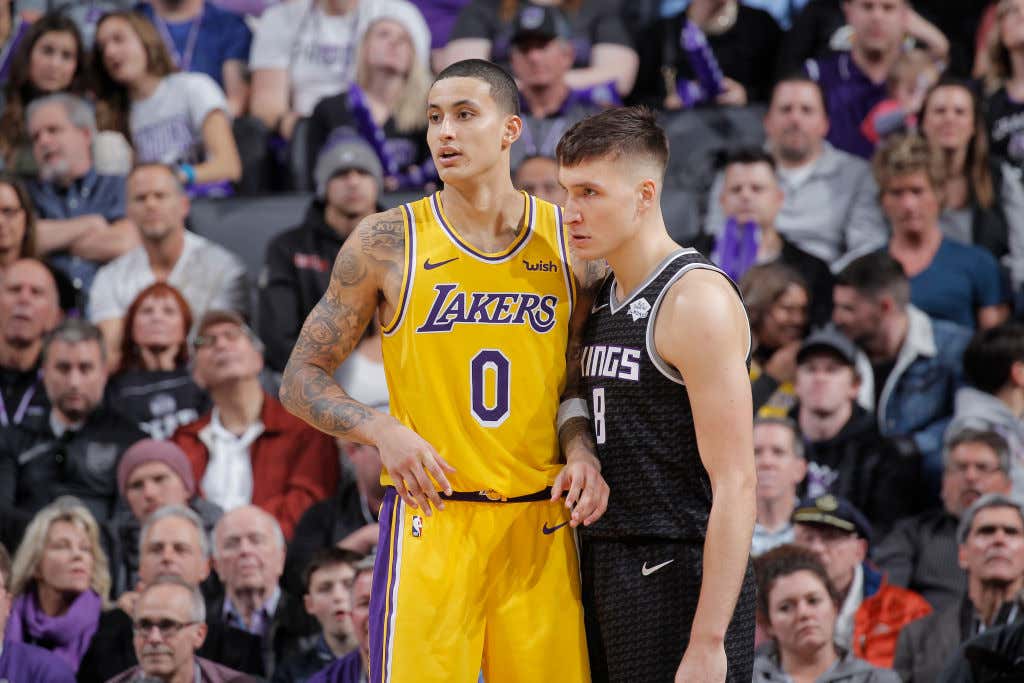 Man do I love the NBA Trade deadline. Love the rumors, love the Stein/Woj/Shams/Haynes bombs, love the fake trades, it's all fantastic. We've had some rumblings so far with Love and Drummond, and recently there is some smoke surrounding Kyle Kuzma. Which brings us to that tweet from Marc Stein. Let me be pretty clear when I say if this is real and there is talks of a Kuzma for Bogdanovic swap the Lakers need to accept immediately and hang up before Vlade realizes what he's done.

Now Lakers fans, don't get defensive. Kyle Kuzma is a fine "young" player. He has his moments for sure, there's no denying that. But he's not a better player than Bogdan Bogdanovic. It's that simple

The one thing you could say that works in Kuzma's favor is that he's three years younger. OK? So what, last time I checked this was about winning NOW in LeBron's window, and Bogdanovic gets this team closer to that than Kuzma does. Not only that, you don't have to worry about his pending RFA because I'm like 99% sure if they do trade for him then his Bird Rights come with him so they can pay whatever in order to keep him. This is a trade you make 100 times out of 100. We also know LeBron doesn't give a shit about trading young players if he is able to bring in talent he thinks can help him win a title now. Kuzma was spared in the AD deal, but by no means does that mean he's safe. Not when the Lakers actually look as good as they do and they've done it largely without Kuzma. The drop off in defense is a bit of a concern, but whatever the Lakers team defense is good enough I feel like you take that risk for the bump in outside shooting, something the Lakers desperately need.

It just goes to show though, even with SAC looking like they actually knew what they were doing in recent years, if this is true and this trade ends up happening, they are the same old Kings. Helping a team in your own division by giving them one of your best players? That's a very Kings thing to do. Is Kyle Kuzma really the best they can do for Bogdanovic? That doesn't feel right. Not when another team gets his rights and the salary isn't all that crazy to match. If you are set on not paying Bogdanovic because you just extended Buddy Hield and have to get ready to pay Bagley and Fox I get it, but you don't do that for Kyle Kuzma.

Let's not even talk about the whole Vlade helping his former team angle. As someone who benefitted from Kevin McHale doing the same thing I don't exactly hate the move. But how would Kings fans react to helping the Lakers of all teams? My guess is not great.