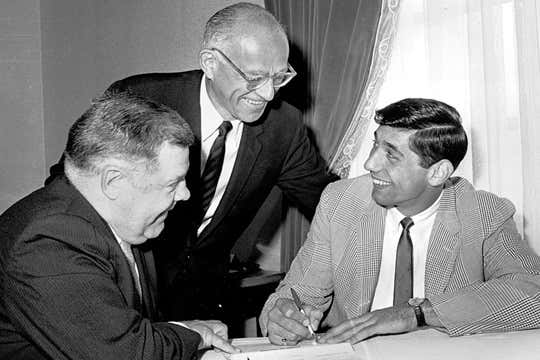 The world of professional football is thrown on its ear, as Joe Namath signs with the New York Jets of the American Football League. Namath had been chosen by the Jets first overall in the 1964 AFL Draft and was picked 12th by the St. Louis Cardinals in the NFL Draft. To get Joe Namath to sign, Jets Owner Sonny Werblin gave the Alabama quarterback as record three-year deal worth $427,000.

Joe Namath was born in Beaver Falls, Pennsylvania, on May 31, 1943. Like many in Western Pennsylvania, Namath’s family worked in the coal and steel industries. After excelling in high school, Joe Namath was one of the most heavily recruited players in the nation, choosing to play for Paul “Bear” Bryant at Alabama. In three years as the starting quarterback for the Crimson Tide, Namath compiled a record of 29-4. The legendary coach called Joe Namath the best player he ever coached.

In 1964, Joe Namath led Alabama to a National Championship, despite losing to Texas 21-17 in the Orange Bowl in what was his final college game as their final rankings were at the end of the regular season with bowl games not having any effect at the time. One day after losing the Orange Bowl, Namath returned to the stadium to meet with Sonny Werblin, in Miami singing the contract under the goalposts at the stadium.

Joe Namath’s three-year contract worth $427,000 hit the NFL and all of Professional Football like an earthquake. In the league’s first five years, the NFL hardly took the AFL seriously. However, with Namath choosing money and the upstart league, owners on both sides new the gauntlet had been thrown down. Over the next few months, the leagues began bidding for each other’s players, with the New York Giants famously luring away kicker Pete Gogolak from the Buffalo Bills.

Fearful of contracts getting out of hand, the two leagues began talks of a common draft. It was in these discussions that the Super Bowl was born. Joe Namath meanwhile had his ups and downs n his first three seasons, but in 1968 led the Jets to an AFL Championship and an appearance in Super Bowl III. It was in this game the AFL reached full legitimacy as the Jets stunned the Baltimore Colts 16-7 at the Orange Bowl in Miami, as Namath ran off the field, waving his finger to declare he was number one.