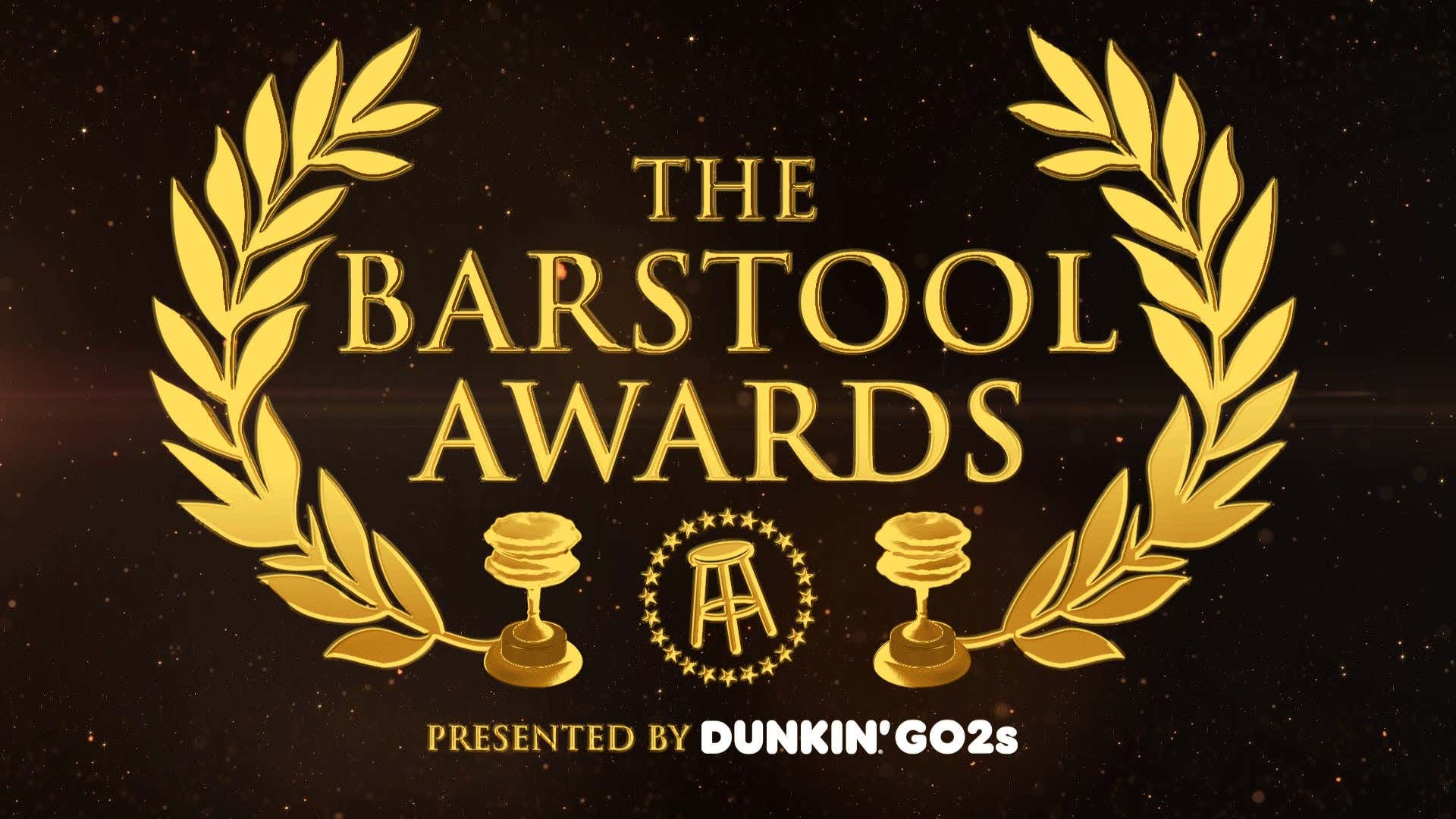 Blogger's Note: As you guys may have noticed, there was no Top 50 blog countdown this year. So in its stead, I decided to pick the best blog written on Barstool. I did this using a very scientific and extremely accurate formula that is way too confusing to post on this website because to be quite frank, the code couldn't handle it. But rest assured that this was EASILY the blog of the year according to all of my advanced metrics and if you disagree with the results, you are no better than the fossil baseball writers that value stats like RBI and pitcher wins over all the fancy sabermetrics mumbo jumbo that we now have available to us. Spider, if you are reading this (which of course you are because it's the fucking blog of the year), please engrave a Dunkin' GO2 award for the tremendous blogger that wrote this blog for when they arrive at the office once it opens back up for business in 2020.

Now without further ado, the 2019 Barstool Blog Of The Year goes to...

Blogger's Acceptance Speech: Oh wow, what a completely unexpected honor! I know that Barstool has some of the best and funniest writers on the planet. Simply sharing a website with them is something I still cannot believe I do on a daily basis, let alone beat ALL of those writers in a completely fair and impartial writing contest. I would like to thank Dave Portnoy for inventing the internet and this company, KMarko for being the best editor-in-cheif on the planet, KFC for giving me a shot here, my coworkers for being the best at what they do in the world, God, DMX (who briefly turned into God that fateful night) and most importantly all the Stoolies for reading our nonsense on a daily basis while also ignoring the typo like the one I had in editor-in-chief. Oh yeah, and my family for supporting me and all that bullshit. Especially Wifey, since she allowed me to whisk her to a DMX concert that we weren't sure would ever happen and if it did, it would be hours after it was scheduled to begin. If you disagree with this award, please let me know which blog you think should have been blog of the year by leaving a 5 star review on The Podfathers with a comment for your pick for BOTY. And to Spider, I was kinda kidding about the GO2 trophy but I was also kinda serious. I know you will do what's right in your heart.

Anyway, without further ado, here is the best Barstool blog of the year according to an absolutely perfect voting system. 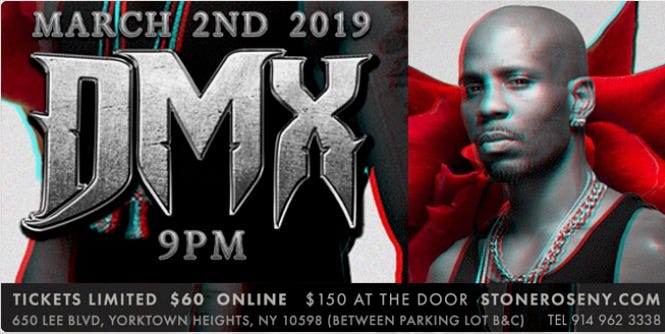 About a month ago, I was minding my own business and scouring the internet for the smut to blog for the wonderful Stoolies out there when I was somebody DM'd me about the above event at my local mall and I had no clue how to react. Being a longtime fan of DMX, I was excited to watch a living legend perform any of his countless hits live. However, as a longtime patron of the local mall here in Winterfell (the Jefferson Valley Mall), I immediately became kinda bummed for DMX. I know X has had some legal, financial, and just overall personal struggles over the year to go along with the endless list of mouths he has to feed.

But the man responsible for some of the hardest and best songs ever putting on a show at a mall steakhouse, no matter how nice or new it may be, caused my brain to explode in my head.

Now for some background, this mall has been trash for years. It was decent back in the 90s when malls were actually a thing. But once the internet came and killed person-to-person commerce, it started to struggle big time. Every other store in the mall was either closed, closing, or seemingly hanging on by a thread. There are currently two (2) total restaurants in the food court, a fake ass Panda Express and a Mexican place that doesn't get the honor to be called a fake ass Qdoba. I will admit that the it is currently #ComebackSZN for the mall as we recently got a Dick's Sporting Goods, some of the empty stores are filling up, and have fancy new restaurants that book hip hop legends. But it's still a pretty depressing place to spend a few hours.

Anyway, I bought 2 tickets for $60 a pop knowing damn well there was a less than 0 chance X hits the stage anywhere near the scheduled 9 pm showtime because of the ABC rule at Barstool (Always Be Contenting) and if I somehow decided I wanted to go last minute, my wife would promptly divorce my ass for spending $150 on DMX tickets at a mall steakhouse.

I figured worst case scenario I could live tweet myself waiting for DMX to arrive only to end up he wasn't going to show up. Laughing at other people's misfortunes is always a hit here at Barstool and I was willing to put my Saturday night on the line . The best case scenario was getting a front row seat to a DMX show for 1/2 the price a ticket would have cost back in his heyday, which admittedly was before Robbie Fox was born. I also realized that a DMX "show" could be 1 hour or 1 song long. However if all went well, I could return to this venue in May to watch C+C Music Factory tear the roof off and June to hear Rob Base throw it back. 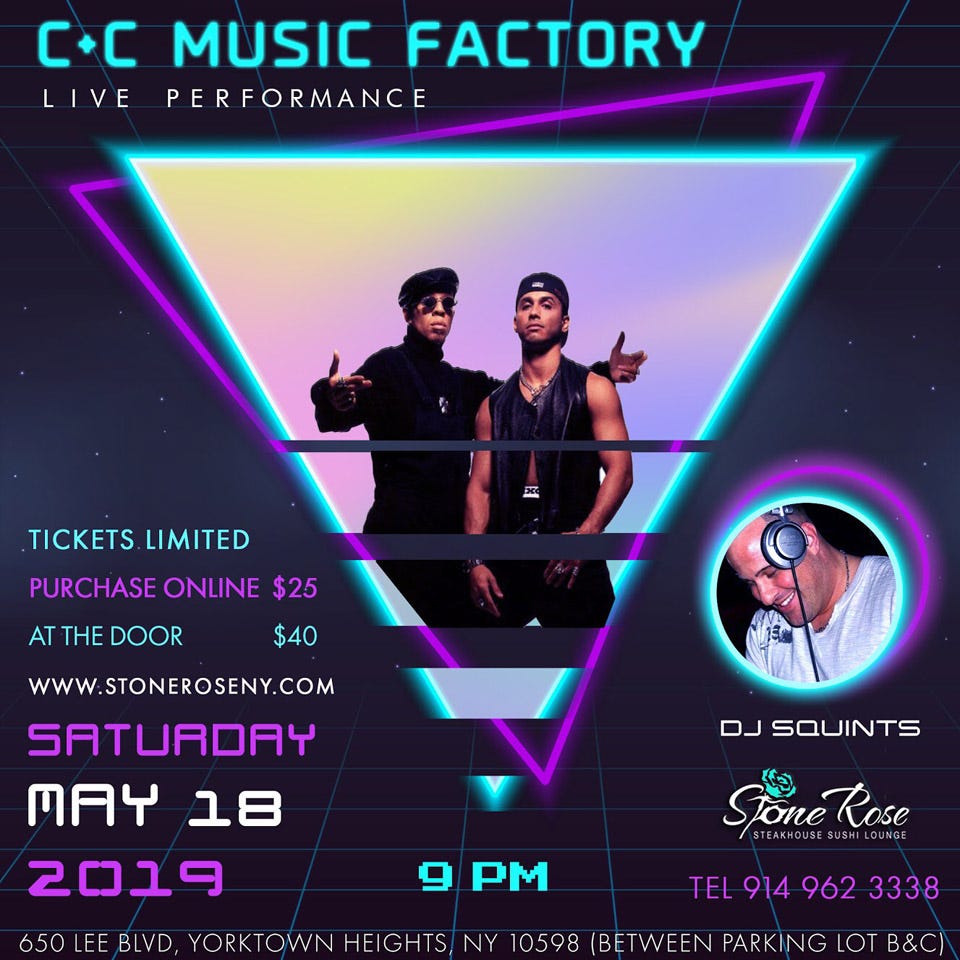 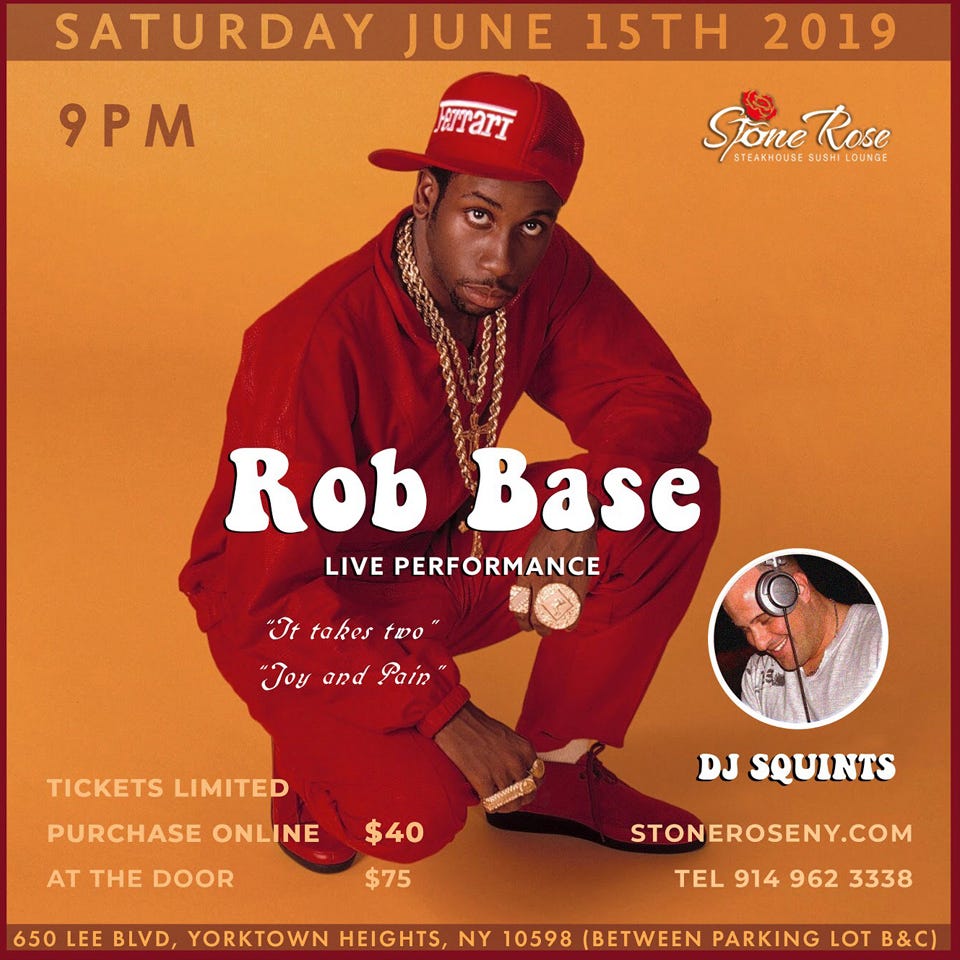 As the show date approached, I really wasn't sure if the show would be a ghost town or packed to the gills. But I was alerted that DMX still moves units. 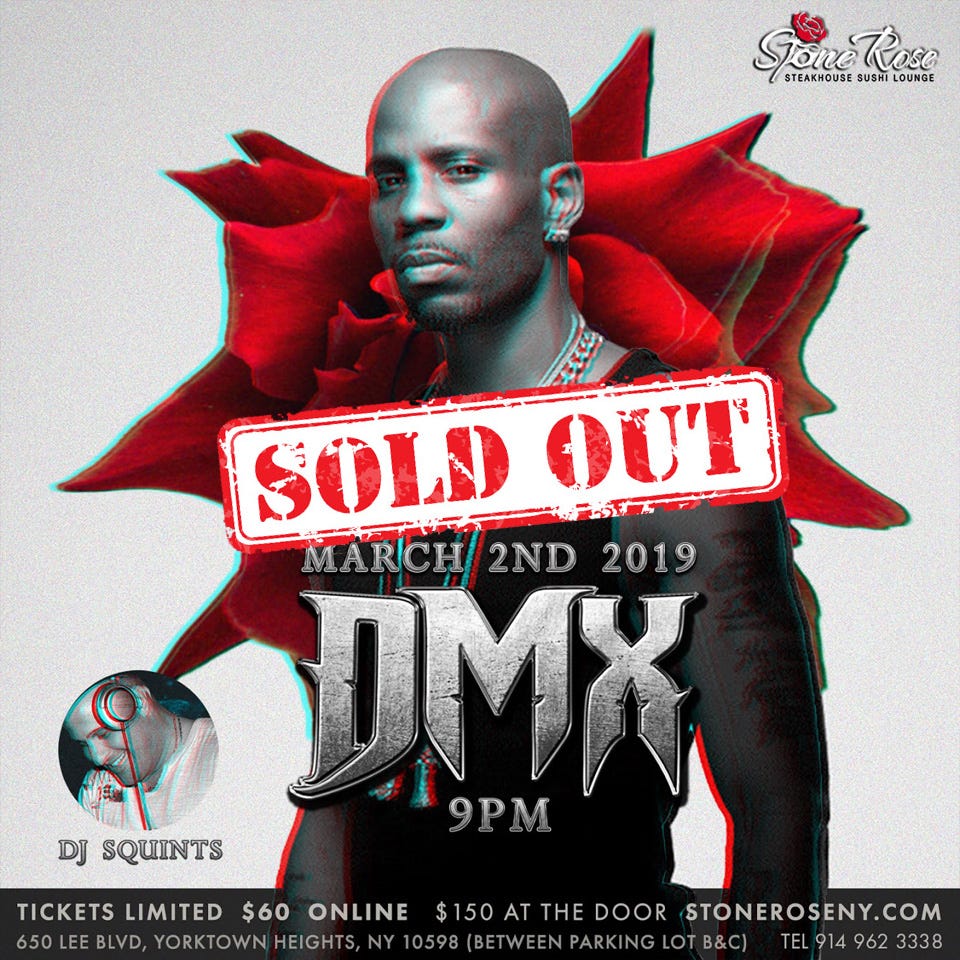 Once the day of the show arrived, my brother sent me this text message that sounded like we were going to get the true DMX experience (DMXperience?).

I didn’t even care if/when X showed up at this point. My in laws happened to be in town for an event for someone who passed and were more than happy to watch the kids for us. And even if DMX straight up told me to my face that he wasn't showing up and every store/restaurant/place of interest within 50 miles was closed, I still would have taken my in-laws up on their offer instead of doing the nightly parent grind for the one millionth time.

Wifey and I originally were going to show up around 10, figuring there was no chance in hell DMX hit the stage anytime before then. I said we could catch up on sleep in the car and call the place to see if the star of the show had arrived or was playing. But since we were so happy to see humans outside of work, we hopped in around 9:15 pm.

We posted up at the bar and were told tonight was “Event Prices”, which meant $15 top shelf, $10 wine/well drinks and $7 beers. A bit rich for these parts but the ambience made it all worth it. 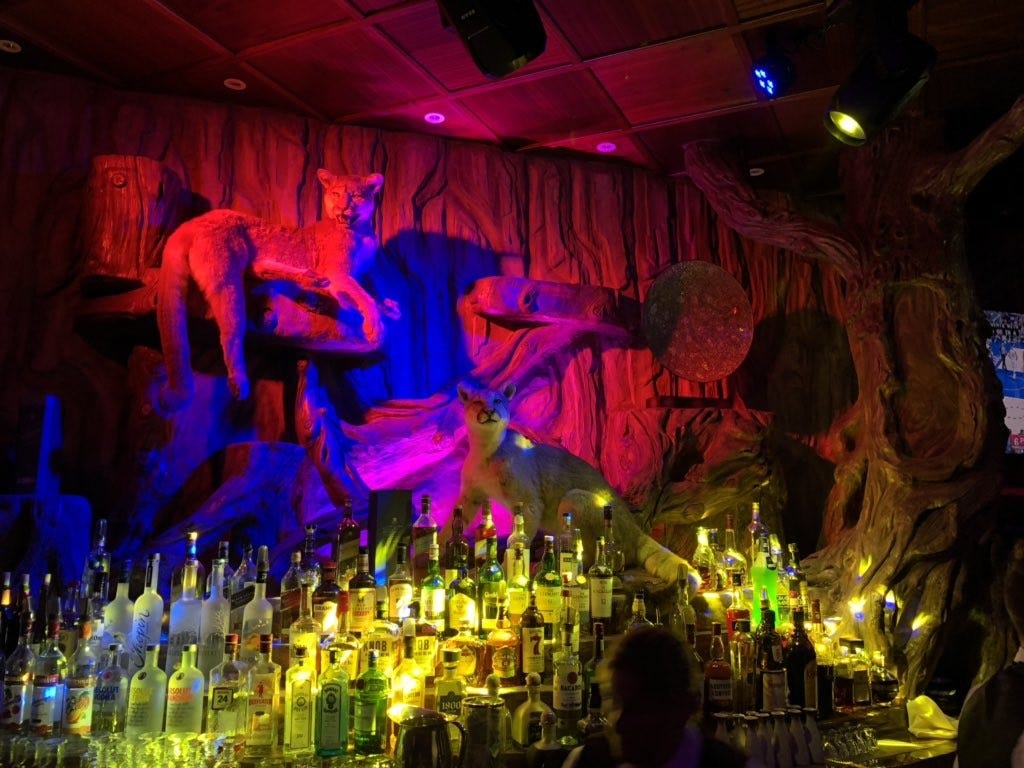 While we were waiting, we heard someone say “If he shows up, this is gonna be awesome”. Somebody that paid $60-$150 to watch a show actually said that about the performer of the show. DMX is truly one in a million.

I hammered down some Diet Cokes Mike Francesa style since I am living that #ketolife while the wife had a few White Zins. We caught up on the last year or so of our lives and remembered why we got married in the first place, since you don't think about that stuff in the trenches of raising kids. And as we were talking, we noticed that the very beefed up security was forming a line. And wouldn't you know it, DMX actually arrived (and only 1.5 hours after the scheduled start time of the event)!

As you can see in the video, I got to dap DMX's iced out ring with my poor person white gold wedding ring as my wife let out an all-time giggle, which was more than worth the price of admission alone. This smile alone for an old, broken down parent is worth at least $200 in my book.

As expected, once Dark Man X showed up, the dance floor got rowdy

Which was only fueled by the guest of honor hyping us up from the VIP room that was right next to the dance floor as a bunch of young adults screamed the eternal question of Where the hood at?

Now this is the part of the story where he hit a slight speed bump. DMX showed up at 10:30, sat down at his table around 10:45 with some family/friends, and appeared to enjoy a full five course meal. By 11:30, there were more rumors about how the night was going to turn out than a typical Knicks free agent sweepstakes. I heard that people saw salad dressing being brought out, dessert had been ordered, and everyone including DMX had put their jackets on and went outside perhaps never to return. By midnight we were setting Over/Unders for when X would take the stage and how many songs he would do, with everyone taking the Over on time he would start and the Under on how many songs he would do.

But even all the 112 and vintage Jay-Z songs in the world can't stop a crowd of dancing, maybe drunk people from getting a bit restless after waiting for someone mere feet away to hop on stage for 3 hours

Then at 12:36 am, Earl Simmons took the stage, told us that he just happened to be there for dinner despite the $60-$150 tickets with his name on it, blessed the crowd, and gave us the most electric 2 song rap performance the Jefferson Valley Mall has ever seen

*Apologies for the vertical video, but I was Periscoping*

And there you have it folks! A prayer, 2 songs, 6 minutes of actual live music (which works out for $10/minute or $25/minute depending on how much you paid but you have to include that the prayer was thrown in for free), and a hell of a memory. I guess some people can complain about the price of the ticket for that type of performance, but some stuff is just priceless in my book. Plus if you paid $150 or $1.50 for a DMX show and didn't expect anything but the unexpected, you deserve to be parted from your money. I can't think of anything more I would have wanted for my $60 than to hear DMX recite a hardcore prayer, list the names of the girls in What These Bitches Want, watch him perform Ruff Ryders Anthem, bark along with/at him, and then leave the stage as the rest of the crowd waits for him to play Party Up. All bucket list stuff for yours truly before he vanished into the night.

Was it fun? Definitely. Would it have been fun even if DMX didn't show up? Of course. Dancing with my wife to songs we danced to in college was probably the most fun we have had together since kids robbed us of joy. Would I do it again? Most certainly not. That entire experience was like watching the ball drop in Times Square. It's something you do to say you did it and you never do it again. When my wife said she couldn't believe that he ate an entire meal, did a prayer, then left after two songs, all I could answer with was "That's X" while I shook my head. But you know what? Nothing my washed up ass is going to do over the next year is going to top getting dapped up by DMX.

Also despite all the fun we had, I'm heartbroken that the JV Mall didn't make the official tour list just because seeing Jefferson Valley Mall on the back of a DMX Tour shirt would have been the funniest thing I ever saw.