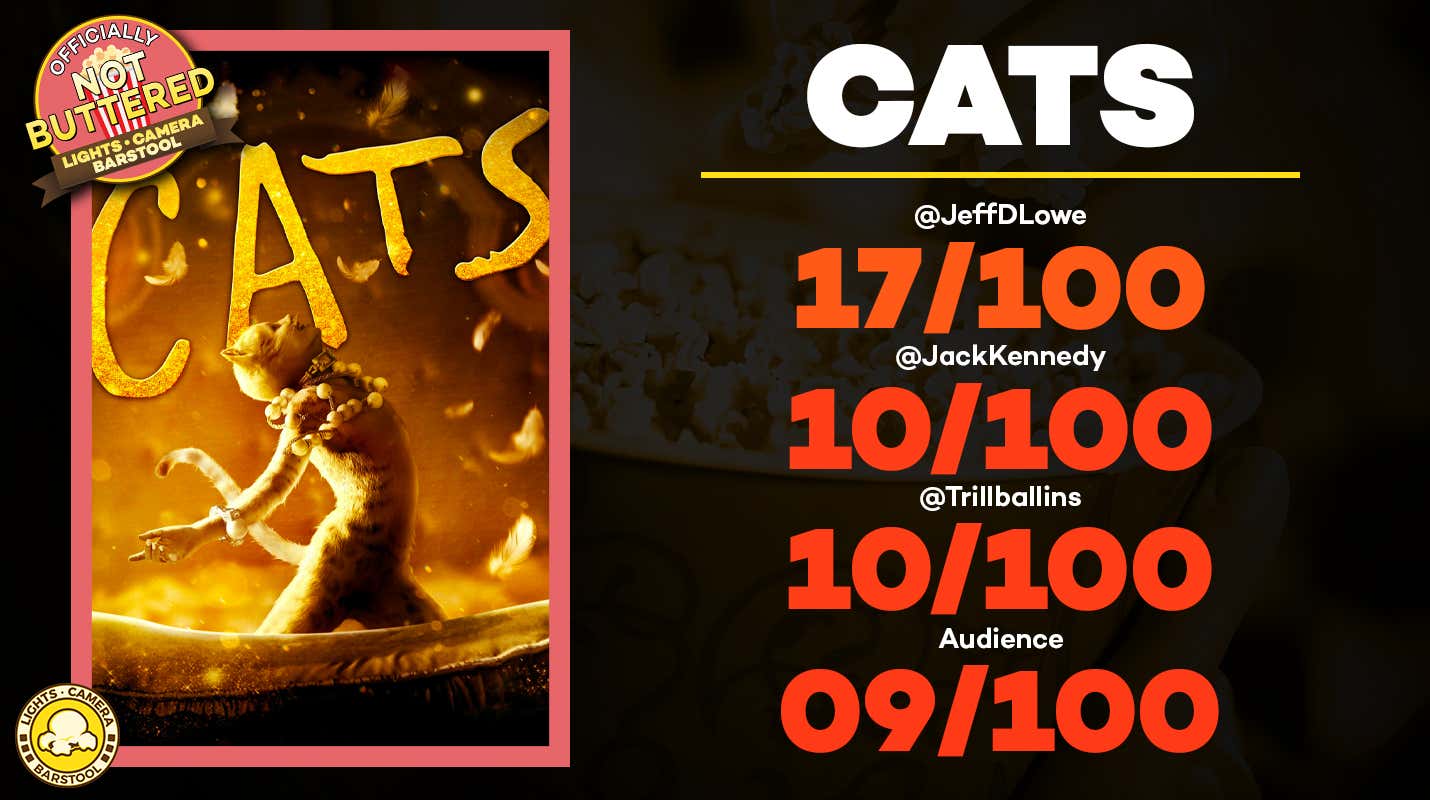 You are about to read a bunch of words about the movie 'Cats'. That is all...

A tribe of cats must decide yearly which one will ascend to the Heaviside Layer and come back to a new life. (via Google)

JeffDLowe (17/100): Factoring in the budget, box office, star power and more, it’s safe to say that ‘Cats’ is one of the biggest misfires in the history of Hollywood. How this movie, based directly on what is oft-described as an unadaptable Broadway show, got made is baffling.

In the most dumbed-down way possible, the “story” of ‘Cats’ is about a bunch of cats who come together once a year to decide on the one cat who will die and ascend to heaven for a new, better cat life. The thing with the Broadway show (I have seen it, I enjoy it, albeit somewhat ironically) is that the story is basically told one song at a time, one character at a time and is fairly difficult to understand. If you don’t grasp the concept from the first song, you’re in for a few hours of confusion. It’s bizarrely structured, but the music is fun and the costumes are weird, yet appealing.

When it comes to the movie, which is essentially a carbon copy of the Broadway show, every single ounce of charm that allows you to look past the faults and quirks is lost in translation from stage to screen.

If you are determined to make something considered “unadaptable” into a movie, you should probably tweak some things in order to make it work, right? Well, they didn’t do that with ‘Cats’. The story remains hard to follow and, at times, completely nonsensical. Unlike going to the theater production, you also don’t get an intermission with the movie to stand up, walk around and think about what the hell you’re watching. In fact, the only significant changes they made were adding a dull song and butchering two of the most popular songs from the stage show. Just take this clip for example…

What an absolute electric factory this Mister Mistoffelees is, folks. He shoots lightning out of his hand, he does all sorts of magic as he hops around on stage. The movie version of this song? Bland, boring and it makes the character seem like a meek wimp, not a Theater David Blaine.

Most of the casting for this movie was a complete whiff, to be honest. Taylor Swift felt out of place with her song, Rebel Wilson’s moment was possibly the worst of the movie as the cats ate weird human-cockroach hybrids that did not translate from stage to screen, Jason Derulo didn’t work as the Elvis-like cat Rum Tum Tugger and, worst of all, James Corden was a complete dud as Bustopher Jones…

WARNING: Do not click this if you want your day ruined

There is no doubt that the Broadway show also looks very odd.

But there is something to it that is at least somewhat pleasing to the eye. The intrigue is that it looks different but in a whacky and fun way. This?

Nearly everything, short of Jennifer Hudson’s performance of the famous song ‘Memory’, is a total failure in ‘Cats’. The movie has left me asking one thing, “what the hell were they thinking?”

KenJac (10/100): ‘Cats’ is everything the critics say about it and more. It’s a complete and total nightmare that nobody thought could be adapted to the silver screen, and this is perfect proof as to why. Visually off-putting, incoherent and downright uncomfortable are all adjectives I would use to describe this misfire. It’s an incredibly difficult disaster to describe, so instead of a written breakdown, I will leave you with this meme:

The movie is Officially Not Buttered, which should surprise no one. We did an in-depth review of the movie on Lights Camera Barstool, including thoughts from Trillballins. Make sure to rate all 2019 movies in the links below.