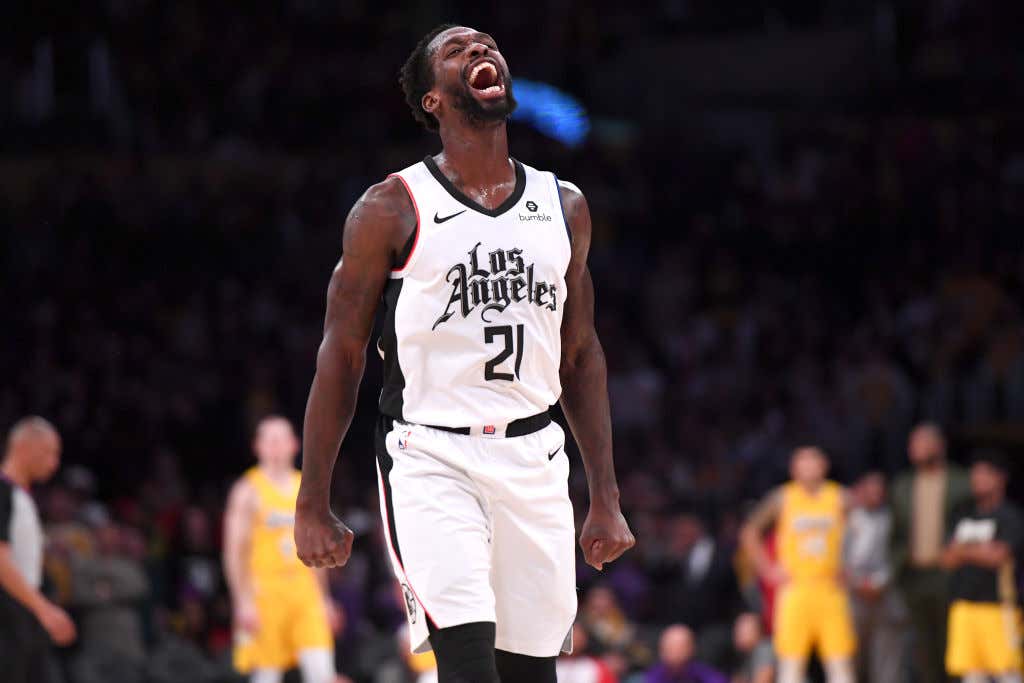 Good morning everybody happy Thursday and welcome back to another edition of Last Night In The NBA where we bring you up to speed on everything that went down from the night before in the Association. I hope you all had a wonderful Christmas or Day 4 of Hanukkah, but the reality is some stoolies out there are back in the cubes today. Now I could have just continued to enjoy my time off but that means I would have been consciously giving some stoolies a giant middle finger. I know from experience, you are looking for ANYTHING to kill time this morning and do whatever you can other than work. Know that I got you. This is why I started blogging in the first place, not to become some sort of internet personality (ha! yeah right), but to do my part to help fellow cube monkeys get through the day, especially on days when there is no chance they want to be sitting in that cube. In my experience there is no better way to do that than basketball highlights so if you were tied down doing weird goyim shit yesterday and somehow missed the action, here's what happened.

We'll be talking more about the Celts in their usual blog so instead let's focus on the Raptors here. Coming off that insane 30 point comeback, the Raptors are weird in that they have no business winning games against good teams while three legit starters are out, but they aren't bad enough with the guys that are left that you can just totally count them out. Playing at home where they were 13-3 going in combined with the fact that Brad Stevens has 1 win in that building in his entire time as the Celtics head coach, who knew what to expect.

What became clear pretty early was this was going to be a firepower issue. It's not their fault, but the Raptors just didn't have enough to match the offensive production the Celtics came out with. Fred VanVleet sure did his best, leading all Raptors with 27

That's a man who has earned himself a big time deal this summer. The other names you know, the Kyle Lowry's and the Serge Ibaka's were good but not great, and outside of Chris Boucher off the bench there wasn't exactly a ton of second unit production either

Rough outside shooting (8-32) and too many TOs (17) ultimately did this team in, as did their defense. The Celts had 63 points in the second half and really opened up things in the third quarter to get separation. They had no answer for Jaylen or Kemba and that's how results like this happen. They've now dropped back to back games against IND and BOS which has them currently in the 6 seed but only 1.5 games out of the 2nd seed. Basically outside of a drastic slide, despite the loss the Raptors are still right there.

There may not be a team where home court is more important than what we have here with the Sixers. They are completely different and much more of an engaged team. A 16-2 record at home compared to 7-8 on the road, there's no other way to say it this was a statement win by the Sixers. How could it not be? The entire world is sucking the Bucks dick for the destruction they cause on a nightly basis, well the Sixers came out and shot the lights out to the tune of 21 3PM and played perhaps theior best game of the season

When they get 32 points from Richardson/Korkmaz as the secondary scorers and they only turn the ball over 7 times, this team is a bitch, especially at home. They had a great defensive game plan to make Giannis look human, and to their credit they put up 121 without living at the FT line. Embiid had what his 4th straight 30/10 game and he did it in only 28 minutes, and this win would have be confident yet frustrated at the same time. It's clear they can hang with anyone in the East, but the inconsistency would be maddening. The good news is they show up in the games that matter against the best in the conference, but with standings so close and homecourt so important, losing a random December game against a bad team could end up hurting them.

Yesterday though, that was pure domination.

For MIL. Bucks fans will tell you this was just an outlier. Hey maybe it is, but they've also now lost In Boston, in Philly, and in Miami. How many outliers do you get in a season? There is no debating this team is a wagon, but they also aren't perfect. Especially when Giannis isn't allowed to shove his dick down defense's throats

But hey, at least Khris Middleton showed up so that's cool for Bucks fans

A poor defensive start set the tone and the Bucks never really recovered. Dropping 18 points in the second quarter certainly didn't help, and this was a 21 point lead by halftime. It only looks that close because MIL won the fourth 36-21 but don't get it twisted, this thing was never really all that close. They still have a 4 game lead over the rest of the field so this isn't exactly a time to panic, but losses on the road to BOS/PHI/MIA can't just be ignored.

The tough part about rooting for the Rockets is nobody is going to care that they have owned this H2H matchup recently in the regular season. Why? Because they choked in the playoffs and the most recent thing people have seen is a fully healthy Rockets team not even being able to beat a completely depleted Warriors team. To lose like this as a 12 point favorite is pretty embarrassing, and it stings when it comes on a night where they got an efficient Harden

There's only so much you can do as Harden if you're getting doubled every time you touch the ball. He made the right plays, his team just couldn't hit shit. Westbrook dropping 30 points on 32 shots didn't help

and the 16-51 from deep as a team didn't help either. A total of 36 second half points against a dogshit defense, there really is no excuse for what we saw if HOU is going to be as good as they want us to believe. They still have a slight lead over DAL for the 4 seed, and are just 1 game back of the LAC, so it's not like we have a disaster on our hands, just a pathetic display of basketball for the world to see.

For GS, call it sad if you want, but this was probably the best win of the Warriors season. Four players with at least 18 points

It's not like anything was all that outrageous, as a team they shot just 9-28 from three. I suppose the 26-28 from the FT line was big, but they turned it over 16 times so it's not like they played a perfect game. They simply found something that worked defensively, took their chances that non Harden Rockets wouldn't beat them, and here they are with the surprise 8 point win.

Who knows how many more they'll have this year, so let them enjoy this one.

You can already hear the excuses from sad Lakers fans. LeBron is hurt, the refs boned them, it's all fantastic. Here are the facts. The Clippers own this head to head matchup so far this season. Their outside shooting killed them in this game and that's because their two best players stopped being aggressive and instead settled for threes where they only went 3-18. A lot of Lakers fans will say that's due to LeBron's injured groin. I ask, well then how come he was able to drive and be aggressive at the end of the game (where he missed some key FTs)? His groin not hurt him then? As is usually the case he and AD combined for almost half their points

but where did the offense go in the second half? Little different of a beast going up against the Clippers and all their plus defenders. Eventually they are going to figure you out and they held LAL to just 43 second half points. The good news is Kyle Kuzma had by far his best performance of the season

and that could provide some much needed shooting in theory.

Of course, this game came down to the controversial play where Patrick Beverley swiped the ball from LeBron, they slowed down the replay and it went off LeBron. Game over. This is a tough play because had that happened at any other point in the game it's Laker ball. We see this sort of thing happen all the time at the end of games where technically it does go off the offensive players fingertips last. You love or hate that call depending on what team you root for. Me personally? I respect the NBA for sticking to the rules. It touches you last, it's off you. Is it a bullshit way to win a game? Perhaps, but LeBron shouldn't have been rewarded for that god awful final possession so cry me a river.

For LAC, yeah, that Kawhi dude is pretty good

Paul George didn't really do all that much to help, just 17 points on 5-18 shooting, but thankfully Montrezl Harrell was there to put in work on the second unit

They clamped down defensively, got a little lucky like with this Lou Williams layup

but hey shit happens. They found a way to live at the line, and hey you come back from being down 15 points in the 3rd quarter, and then a 7 point deficit about halfway through the fourth, you deserve this win. The Lakers and their fans can talk all about past championships and all that, but there is one king in the city of Los Angeles and he doesn't wear purple and gold.

Oh hey look the Nuggets pulled a Rockets! Even worse though considering this was at home. Not sure where that elite defense was that we tend to see the Nuggets play, it certainly wasn't anywhere close to stopping Brandon Ingram

Him and Holiday were big time problems for the Nuggets defense

and to their credit they hung around all night and then pulled away over the final 12 minutes. A nice 45/41% splits with 18 3PM, those are the things you have to do if you want to beat DEN in their own building where they were 13-3 going in, and it's pretty clear Ingram is going to get that bag this summer. I'm talking max money level bag. Who knows if Zion is ever going to actually play or if Jrue Holiday is even on this team in a month, but a nice surprise Christmas road win has to be the highlight of their season so far.

For DEN, tough to win when Jamal Murray goes 2-10. Jokic certainly did his best to carry the load despite his 5 TOs

and they got some decent bench scoring, but in a game like this you need your stars to carry you and the ones on the Nuggets side came up short. This has been a weird Nuggets season where their record is still damn good, but the feel you get watching them tells you something is off. Maybe it's losses like this, I mean the Nuggets are still the 2 seed so it's not panic time, but these bad losses add up and could be costly in a tough race. Much like PHI, this team can beat anyone but they can also frustrate the shit out of you with losses that should never happen.

And that's it! Hopefully this helped kill some time for those of you in the cubes today. We're back with 6 more games today so you know the drill. Have a great Thursday!