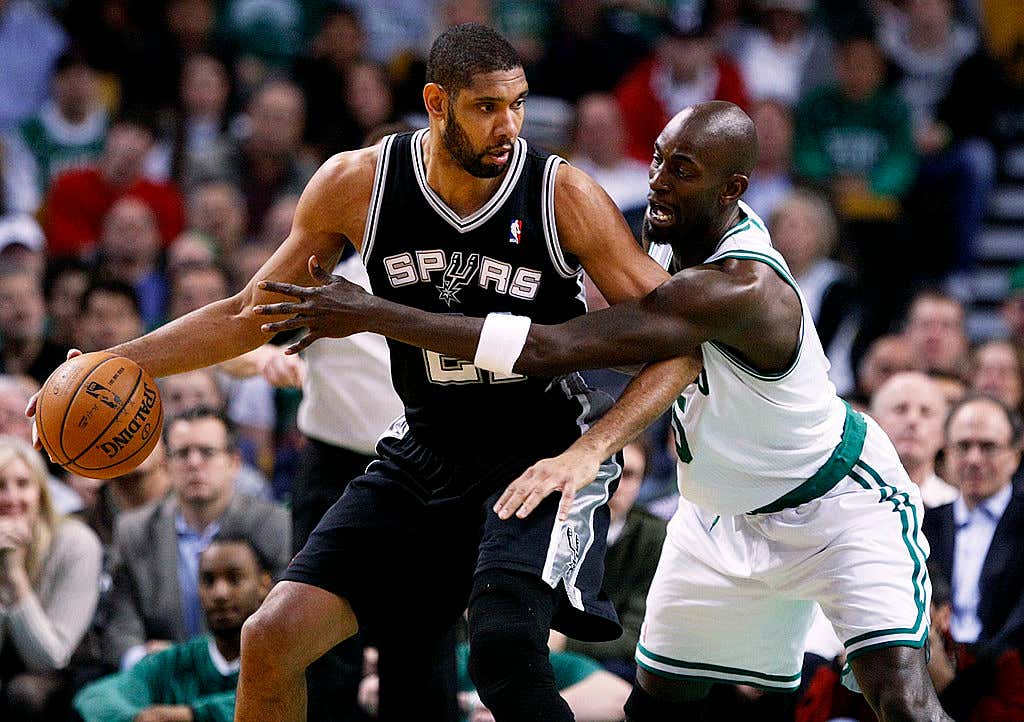 It's certainly a little weird to see some of the greatest players I watched growing up now be eligible for the Hall Of Fame. Makes me feel old as shit because make no mistake we are getting to the point where some of the biggest names in NBA history are now becoming eligible and it's for sure weird. Take that picture for example. The grouping of Shawn Marion/Tim Duncan/Kobe/Chris Bosh/Kevin Garnett/Michael Finley are all eligible for the first time this year and I'd say at least 4 from that group are locks. The thing is though, there are other nominees that are certainly no slouches like Chauncey Billups, Ben Wallace, Rip Hamilton, Tim Hardaway, Mark Jackson, and Chris Webber just to name a few. I'm not sure if any of those guys break through, maybe Webber finally, so instead let's just focus on the first timers for the sake of this blog.

The point is, Duncan is the very definition of a first ballot HOFer. This I think we can ALL agree on

The question is, what does he go in as? This may be an unpopular opinion, but I have no problem if he goes in repping the Timerberwolves. Sure he won a title in Boston, but he only spent 5 seasons there. Maybe he'll do a split thing or something, but I say let the people of MIN have this one since we got the ring.

Now this is where things get interesting. I know there are people out there that do not consider Bosh a Hall Of Fame player. I don't understand why, and basketball reference has him as a 99.5% probability so just accept that Bosh is getting in at some point. Is it because he took that third option role in MIA that make people think that way? Because he was every bit the beast and HOF talent while in TOR, and his numbers were still around 18/7 during those MIA years. Looking at his resume you see a 2x champion, 11x All Star, All NBA Second Team, All NBA Rookie First Team which is nice. But he's only 93rd all time in points, 81st all time in rebounds, and 20th all time in blocks so it's not like those numbers stack up with the other locks from this class.

I'm someone who thinks he's a lock to get in on his first try, but it wouldn't surprise me if he doesn't get in this year but eventually gets in. He did only make 1 All NBA team and it was a 2nd team, so maybe if Bosh gets in everyone will wake up and put Webber in as well.

Now Marion is a really interesting case. He got his ring, was a 4x All Star, a 2x All NBA Third team member, and was a Second Team All Rookie selection. It's crazy to think this guy never made an All NBA Defensive team because if you watched him play you saw what a beast he was on that end. Basketball Reference gives him a 76% chance and he was key in that DAL title, but he's one of those guys where his resume might make him wait a little bit. There are plenty of really good players that still aren't in, for example Chauncey Billups has an 84% chance to make it and he's still not in.

I think with Marion it's the old debate of if this is the NBA Hall Of Fame or NBA Hall of Very Good. It wouldn't shock me either way, but because he was such a unique player I think he eventually gets in, but certainly not on the first try.

I get he played forever. I get he made a few All Star teams, but let's not get crazy. Michael Finley was not a Hall Of Fame basketball player. He was really good in DAL there's no arguing that. But come on, we can all be honest here. Nice of them to include him in that picture because this is his first year eligible, but he has no shot.

So what say you. Outside of the Kobe/KG/Duncan locks do you think any of these other guys get in on the first try? Is this the year we see Billups/Ben Wallace/Chris Webber finally break through? Next year we get names like Paul Pierce, Luis Scola and Deron Williams becoming eligible, and really the only lock there is Paul so maybe those fringe guys will get in