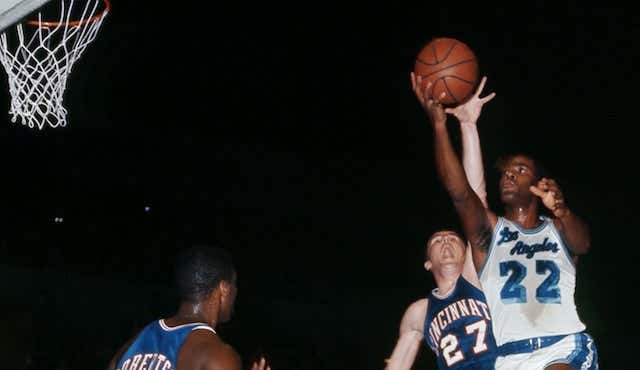 Elgin Baylor of the Los Angeles Lakers outduels Bob Pettit in 137-136 overtime win over the St. Louis Hawks at the Los Angeles Sports Arena. Baylor becomes the first player in NBA history to score 50 points and record a Triple-Double. Baylor finishes the game with 52 points, 25 rebounds, and ten assists, while Pettit had 49 points and 14 rebounds for St. Louis.

Elgin Baylor was born in Washington, DC, on September 16, 1934. A top basketball star in high school, Baylor had poor grades and struggled to get a scholarship, settling on the College of Idaho, where he played for one season. After sitting out a year to get his grades up, Baylor transferred to Settle where helped the Chieftains reach the Final Four in 1958. That year Seattle’s only trip to the Final Four ended with a championship game loss to Kentucky.

The Minneapolis Lakers would choose Elgin Baylor with the first overall pick in the 1958 NBA Draft. Baylor had a solid rookie season scoring 24.9 points per game and winning Rookie of the Year honors, as the Lakers lost to the Boston Celtics in the NBA Finals. Something that would plague Elgin Baylor his entire career, as his Los Angeles Lakers did not win an NBA Championship until the season he retired, losing in the Finals eight times.

The Lakers were in their second season in Los Angeles when they hosted the St. Louis Hawks on a Wednesday Night in December. The Hawks and Lakers had been trading off the Western Division Championship since 1957, with the Lakers reaching the Finals in 1959, while the Hawks made four times in five years. The Hawks were off to a slow start in the 1961/62 season as Paul Levane took over the coaching duties as they held a 10-17 mark. The Lakers meanwhile started strong at 22-7 under Fred Schaus.

The game would turn into a showdown between stars Bob Pettit and Elgin Baylor. Each put up big numbers as the two Western powers battled into overtime. When the dust settled, it was Elgin Baylor setting an NBA record by becoming the first player in league history to record a Triple-Double while reaching 50 points. Baylor ended the night with 52 points, 25 boards, and ten assists. Bob Pettit was nearly as good, scoring 49 points to lead the Hawks, adding 14 rebounds.