2011. What a magical time it was to be alive. Barstool was still headquartered in Boston but taking over the internet across the globe. You could get a gallon of gas for just under $4. "Transformers: Dark of the Moon" was taking in a billion worldwide. Robert California was replacing Michael Scott on "The Office." Kids from coast to coast were dancing to "Fuckin' A" by Anal Cunt. Chad Johnson was setting the Patriots' world on fire with 15 receptions on the season. And ladies across New England were swooning over their latest heartthrob, a kind, soft-spoken 22-year-old out of Connecticut by the name of Aaron Hernandez.

It was a time when anything seemed possible. When winning "American Idol" meant you might become a nationally celebrated recording artist and not just sing the National Anthem at rodeos. When a Mahattan real estate mogul could host a Reality show with Jose Canseco, Gary Busey and Meatloaf. And when an NFL team could put a camera crew on the field to record their opponent's sideline in broad daylight and nobody cared. 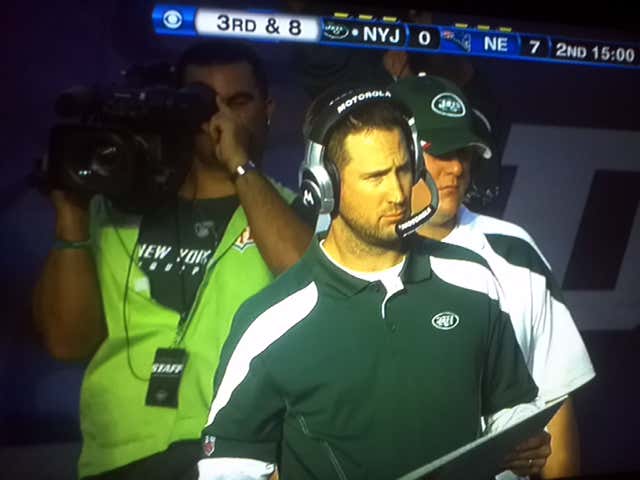 Source -  Well, the latest NFL controversy was over before it even really began.

Many of you have been up in arms regarding the presence of a man with a camera on the Jets sideline during Sunday’s game against the Patriots.  The camera was pointing out onto the field, and possibly across the field to the Pats sideline.

The Jets have explained to PFT that the man with the camera “works for Jets TV and shoots footage for our team programming.”

The Jets also have pointed out that the league’s 2011 policy on sideline media access permits “[c]lub video crews and video crews from television stations that produce and telecast club-licensed programming (e.g. coaches’ shows, team magazine-style shows, etc.) may also be permitted to have a camera on the sidelines to shoot footage for those club-licensed programs only.”

Thus, the presence of the camera doesn’t constitute a violation of the rules.  And any team can do it. ...

Maybe every coach is fine with it because every coach has an in-house camera guy potentially doing precisely what the Patriots used to do, with only the addition of a lime green vest.  Or maybe the lime green vest makes it easy to track the guy with the camera in order to make sure no funny business is happening.

I say again, what a moment in history. It was like living in the time of Camelot. You point a camera at a opposing team's sidelines as their coaches are calling plays and swapping out personnel and it would barely register on anyone's radar. All you had to do was say the camera crew was from club-licensed programming, cite the rule that says it's perfectly legal, through a lime green vest on the buggers and you were haulin' the mail. No issues. Let's move along citizens. Nothing to see here.

I hate to sound like an old fart who lives in the past, but I miss those days.

Now that we've seen the rule about the lime green vest and we've heard the guy working the "Spygate 2: No Time to Spy" camera was wearing Bruins gear, I think the punishment should fit the crime. They should pay a fine of at least double the cost of the vest. So like 50 bucks and call it a day. It's 50 bucks more than the Jets paid back in 2011.

[Note: Edit made by me to update to the correct picture of the Jets employee in the lime green vest.]