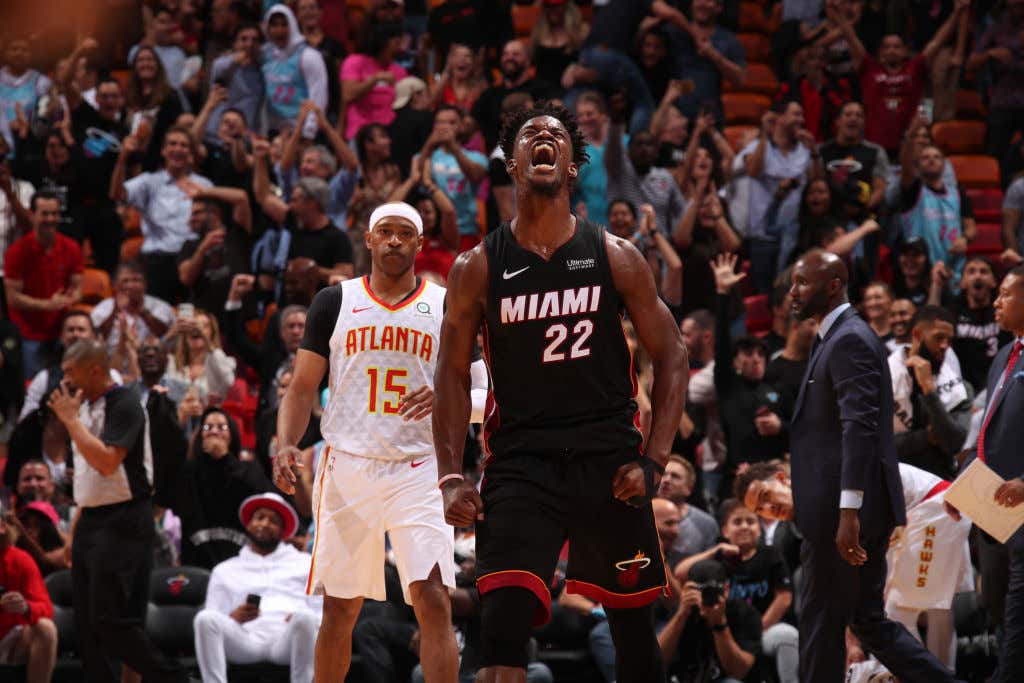 Good morning everybody happy Wednesday and welcome back to another edition of Last Night In The NBA where we bring you up to speed on everything that went down from the night before in the Association. It was a relatively light Tuesday night with only 4 games on the schedule, but we were still blessed with some NBA history, close finishes, epic runs and great individual performances. I'm not sure what else you may have been watching instead of basketball last night, but in the event you missed any of the action here's what happened.

You see this matchup on paper and you probably think this game stunk. I mean neither of these teams are all that good, the Wizards are 3-10 on the road and the Hornets just 6-8 at home but look someone had to win this game. Not only that, but it was actually entertaining as hell! The scoring is a little low for my taste with the Wizards involved, normally both teams are in the 120s, but this thing was pretty much close the whole way and if you forget that both these teams are headed for the lottery it may have been one of the games of the night.

If you're a Wizards fan you already know this season isn't so much about winning as it is just getting good development from your young talent, letting Beal do his thing, and then scoring a shit ton of points because somehow this team has a top 5 offense. Well, some of that happened in this game with Rui Hachimura looking solid as ever

he isn't really in the ROY conversation, but this dude has been great for the Wizards basically all season. Another 18/12 on good splits in this one, the Wizards may have actually gotten this one right which is certainly a surprise. Now Bradley Beal was OK, he didn't shoot the ball all that well, so how did the Wizard even stay in this game? That's easy, the Latvian Laser

how about a career high 32 points and 8 3PM? I don't know what has gotten into Bertans recently, but this man is on fire. Look at his December!

I bet the Spurs wish they still had this guy. That Marcus Morris really boned them huh. Sure the Wizards aren't winning these games but whatever, the Latvian Laser is on a tear.

Sadly, like it so often does for WSH their defense ultimately let them down, and unfortunately their early 8 point hole proved to be too much.

For CHA, good balance on offense, decent shooting splits and low turnovers are usually things that lead to wins. Much like the Wizards and Bertans, you know who has been on fire not just this month, but this entire season? Someone who SHOULD absolutely get serious MIP consideration? Devonte Graham

It's safe to say he is their #1 scoring option right? You want a reason why the Hornets have 10 wins, I feel like Graham is single handedly responsible for like 7 of them. His three point shooting has proven to be legit, he ranks near the top of the league in threes living around names like James Harden and Kemba Walker, and who knows where CHA would be without him. Terry Rozier wasn't all that efficient and the young frontcourt had its moments

but the MVP of this team is clearly Devonte Graham. The Hornets are now just 2.5 games out of the final playoff spot, so you never know.

The Nuggets need to get away from the East coast. It's been pretty brutal for them these last few weeks, especially on this trip and unfortunately when you play in the West you can't exactly have stretches like this

Woof. This skid now has them sitting in the 5 seed in the West, and to make matters worse they lost Jamal Murray 6 minutes into this game with some sort of hip injury. Beating the Sixers on their home floor is hard enough, to do it without one of your best players is almost impossible. Will Barton certainly tried to keep them in it, he led all scorers with 26

and to their credit the Nuggets did hang around, even making this a game in the fourth quarter. The problem though was their shot selection down the stretch was dogshit. So many missed layups and turnovers in the fourth quarter, then they started to panic with bad threes which may as well have been turnovers, and even with the Sixers scoring just 14 fourth quarter points the Nuggets couldn't get their shit together to pull out this win. Every time they would cut it close they immediately gave up another Sixers run.

The issue for them was mostly their bench unit. Tough night for that group and it was ultimately the difference. Poor shooting, tons of turnovers, unfortunately that's the group that buried the Nuggets.

For PHI, look, it's not on them that Jamal Murray got hurt. Shit happens. The Sixers have a tough stretch right now and so far are 2-0 after beating TOR/DEN. They're great at home, now 13-0 and this was an impressive win considering they got just 10 combined points from their starting back court and Horford shot just 5-16. That means guys like Tobias Harris and Embiid carried most of the load

If the DEN bench is what did them in, the PHI bench is why they won. Thybulle was great in his 26 minutes and is showing that his three point shooting might be legit and we all know what he is as a defender

but they also got solid contributions from Mike Scott and James Ennis in their limited minutes. This game was there for the taking, and it's not the first time this season we've seen PHI come through in tight situations, especially at home. That's why it's so important that they finish with a top 4 seed, because they are a different animal in that building.

Christ Atlanta. First we have reports that Trae Young threw a temper tantrum in the locker room a few games ago because his team stinks and the front office promised to bring him help. Then we have Trae Young in this game talk shit that the game was over before it was in fact over, and it blew up in his face BIG TIME.

I'm sure he thought the game truly was over, it's not often you see a team blow a 6 point lead with 1 minute left, but after what we just saw with Russell Westbrook the other night, he should have known better. To waste Vince Carter's 1,500th game where he actually played well off the bench, and to waste a night where the two lottery picks combined for 44 points, you just hate to see it. This team is now 2-8 over their last 10, and are very close to reaching Knicks territory, something NOBODY saw coming.

For MIA, this team just won't die. Another team that is still undefeated at home, this was a big time comeback win fueled by a 22-0 run to end regulation and get into OT, and then ultimately a 24-5 run to finish. This was a game where the starters dominated, we had two players with triple doubles, someone making a franchise record 10 3PM, and a rookie dropping 36

How historic was this night for the Heat? Well,

I just can't get over what a bad idea it is to trash talk Jimmy Butler while there is still time on the clock for him to shove it right in your face. What an idiot!

You know it's a good thing the Knicks fired their coach after they lost all those games by like 10 billion points, only to immediately come out and lose by……28 points. David Fizdale was definitely the problem! Another stellar 35/18% performance from the Knicks with absolutely nothing coming from 60% of their starting lineup. That seems like a problem. I'd put in some highlights of the 1 or 2 guys that actually played OK, but they aren't anywhere on the internet so let's just move on.

For POR, listen this team needs every win they can get, especially at home, so it was good to see them not even play around with the Knicks. They got up by double digits early and never really looked back. Dame did Dame things

Melo had a decent night against his former team, not all that efficient at 5-13 but he was 3-4 from deep

and things really ballooned over the 2nd and 3rd quarters when the Blazers defense tightened up and they allowed only 37 points. They also got a solid showing from Anfernee Simons who has been very good off the POR bench this season

and moving forward the Blazers have a struggled Nuggets team and then PHX/GS/ORL/MIN/NO so there is a chance they could make up some ground after their slow start. They are two games out of the final playoff spot, and who knows if they somehow pull off a trade for Love/Gallo, their season might be back from the dead.

And that's it! You are now all caught up with everything that happened last night in the NBA. We're back tonight with a full slate of 11 games so you know the drill. Have a great Wednesday!