The rollercoaster continues. The confusion continues. The frustration continues. Third game in four nights against one of the top teams in the Western Conference. If you told me before the game that the Blackhawks would get a point out of that game I probably would’ve taken it and been happy. Watching the game though I wanted to throw my computer through the TV. Another huge lead squandered. Completely out-played for the final two periods and the only reason the Blackhawks were able to get that point was because of Robin Lehner doing sorcery in the net. Very frustrating. The top guys have to be feeling it too

I don’t know who this was directed at or what was said even though I’ve tried reading Toews’ lips 100 times this morning. Maybe he’s saying “look how good I’m doing now that you finally took that plug Nylander off my line”.

I don’t know why it took so long for Colliton to put Saad-Toews-Kubalik together. It makes no sense. They’ve tried everything except for that line even though it was staring Colliton and the entire world in the face since like October. Saad-Kampf-Kubalik was a very good line to start the year. Toews needed help and Saad needed more ice so they promoted him. Made sense. Then even though Nylander has been a complete bust he continually was given a zillion chances in the top 6 and on the PP. Nylander is a dog. There’s no two ways around it. It feels like he gets chances basically because, well, management doesn’t want to look stupid. Nobody should be able to look you in the eye and say that Nylander deserves to play every day or play in the NHL at all. He hasn’t earned anything. He’s got a prominent last name and Bowman in his corner. That’s why he plays. It’s preposterous that Kubalik has been a healthy scratch instead of Nylander several times. Nylander starts games with Saad and Toews, Nylander doesn’t battle, hustle, and he’s allergic to the front of the net, Nylander gets benched, rinse, repeat. The combos matter. The Hawks finally have the top 6 that they should. Hopefully they stick with it.

When the Blackhawks are healthy I’d like to see

It’s taken the Blackhawks staff two months to figure out the right top 6. Who knows how long it’ll take them to get the bottom 6 right. Here is the things about Sikura…he works harder than Nylander. Points will come for him. I like the idea of playing him with Dach because both of those guys know how to play, hang on to the puck, and make plays. Shaw can go get it for them and go to the net where he belongs. Nylander is never going to do that. Dach should be getting time with offensive players too. That’s what he was drafted to be. Not a guy who, by the quality of his linemates, is limited with offensive zone time and chances.

Speaking of what the line up should be when healthy…

I don’t need to see Gustafsson, Maatta, or Koekkoek ever again. Maatta and Koekkoek are fine. If they’re your 7th defenseman that is okay, I suppose, but the clock is ticking on the season. The time for development and contracts and tip toeing around feelings is over. The Blackhawks need their best 20 guys to be dressed every night. I think the PP would be better with Boqvist instead of Gustafsson at this point, they defend about the same I would say overall(maybe even a slight edge to Boqvist) and I just like Gilbert. I always have. I like that he likes to pound faces. He is a hard dude to play against even when he’s not doing this

If the Blackhawks kill this penalty and go on to win the game 3-2 then Gilbert is being heralded as a hero for whipping that ass. Instead it’s people wondering if this was a bad decision. I’ll take it. And I’ll take Gilbert in my 3rd pair every night because he brings that edge. He skates a little better than Maatta. He just needs to learn and grow a bit at the NHL level. Net-net I think you’re better off over the next 4 months with Gilbert.

There’s work to be done, but it’s not time to get off the roller coaster. You play three games in four nights against pretty stiff competition and you come away with 5 points…that’s a win for any team in any year. That’s what happened. It’s time to look at the standings again 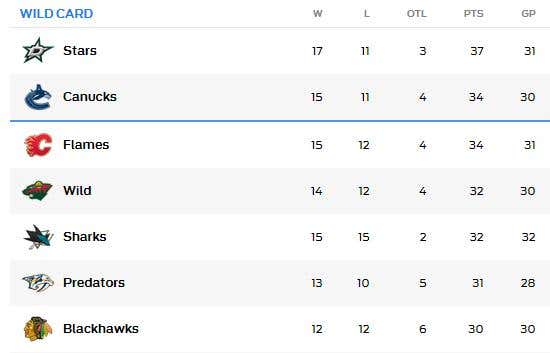 We are talking about four points. It’s a lot of teams to jump, but it’s not impossible. Keep riding, keep playing, hope that coaching and management figure it out enough to have the Hawks in the dance when this ride ends. Join Or Die