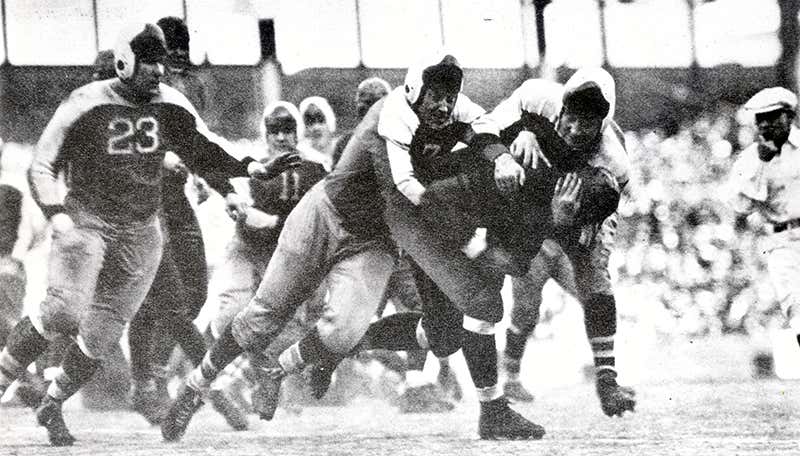 The New York Giants upset the Chicago Bears 30-13 in the NFL Championship Game at the Polo Grounds. The Giants scored 27 unanswered points in the fourth quarter after putting on sneakers to get better footing on the icy field. The Giants win spoils an unbeaten season for the Bears as the game forever becomes known as “The Sneakers Game,” helping to legitimize the NFL Championship Game.

The Chicago Bears of George Halas were the dominant team in the NFL. In 1932 the won the league championship in a tiebreaker playoff and won the first official NFL Championship Game in 1933. In 1934, the Bears dominated winning all 13 games, while outscoring their opponents 286-86.

The New York Giants coached by Steve Owen posted an 8-5 record, winning the Eastern Division for the second straight season. In 1933, the Giants lost to the Bears in the NFL Championship and suffered a pair of losses to the Bears in November.

It was a cold icy day as the New York Giants took on the Chicago Bears in the NFL Championship Game at the Polo Grounds. The Bears came into the game with an 18-game winning streak and were expected to win the NFL Championship again. Conditions that day were difficult as both teams had trouble finding their footing as the field was frozen over after freezing rain fell the night before. Ken Strong had given the Giants an early 3-0 lead, but Chicago found the end zone on a run by Bronko Nagurski in the second quarter and held a 10-3 lead at the half.

During the first half, Ray Flaherty of the Giants suggested to coach Steve Owen that the team would be better off playing in sneakers. Abe Cohen, who was assisting on the Giants sideline, left and went to nearby Manhattan College, where he asked Athletic Director Brother Jasper to borrow, the basketball team’s shoes. Cohen returned with nine pairs of basketball shoes for the players to use and get better footing on the ice. Years later, Manhattan College would name its athletic teams Jaspers in honor of the AD who handed over the sneakers.

Despite the sneakers giving the Giants better footing, the Bears extended their lead to 13-3 with a field goal by Jack Manders. However, the better footing began to pay off as the Giants found the end zone early in the fourth quarter as Ike Frankian caught a 28-yard pass from Ed Danowski. The Giants quickly got the ball back and took the lead on a 42-yard run by Ken Strong. Strong later added an 11-yard touchdown run but was tired and missed the PAT as the Giants extended the lead to 23-13. By now it was clear the sneakers had changed the game, as the Bears were falling all over the field while the Giants dominated the fourth quarter, with Ed Danowski running a nine-yard bootleg to wrap up the scoring and win the game 30-13, with 27 unanswered points in the fourth quarter.