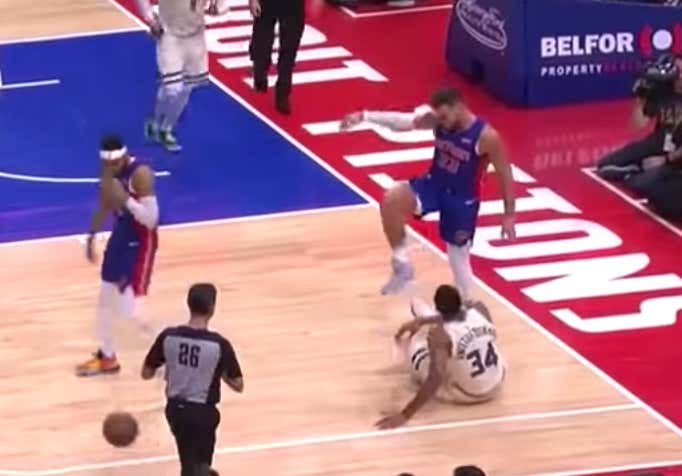 A few things are true when it comes to the freak that is Giannis. For starters, he's the leader right this second in the MVP race and that is not debatable in my opinion. He's improved across the board from his previous MVP season which was already ridiculous statistically, his team is rolling with 13 wins in a row and has the best point differential in the league. Giannis has been just as devastating as you expected heading into the year and to put it in perspective he's having a better season than even prime Shaq. That's nuts.

But what is also true is he may have a a situation on his hands when it comes to opposing players. This dude cannot stop getting stepped over which as we know in basketball is some disrespectful shit. Why do you think we still talk about AI's step over on Ty Lue?

as a basketball player, this is not something you want to be on the receiving end of. To be arguably the best player in the league and have this happen on multiple occasions? Giannis has to do something about that. We had another incident last night with Blake Griffin doing it

I mean sure it's a bad idea because all this does is piss Giannis off and then he destroys you on the court but that's not the point. You can't be an MVP and have everyone from scrubs to Blake Griffin doing this to you on numerous occasions. I know Giannis is more of a lover than a fighter but you have to nip this shit in the bud immediately. You can't let opposing players show you this type of disrespect. While I respect his ability to not take the bait and do something stupid, sometimes you just have to make it known that shit like this will not be tolerated. I just can't remember a player of Giannis' stature get disrespected like this over and over again. Do players think he's a bitch or something? Is this their way of trying to at least get some sort of win against Giannis because they know he's going to put up like 35 points in 28 minutes and crush their souls? It just seems like guys are way too willing to pull a stunt like this against Giannis and at some point he has to put an end to it.

I can understand not starting beef with Blake, he's both awesome and a massive human. But if there's another Hezonja out there who sucks and does this to Giannis, he might just have to lose his shit.