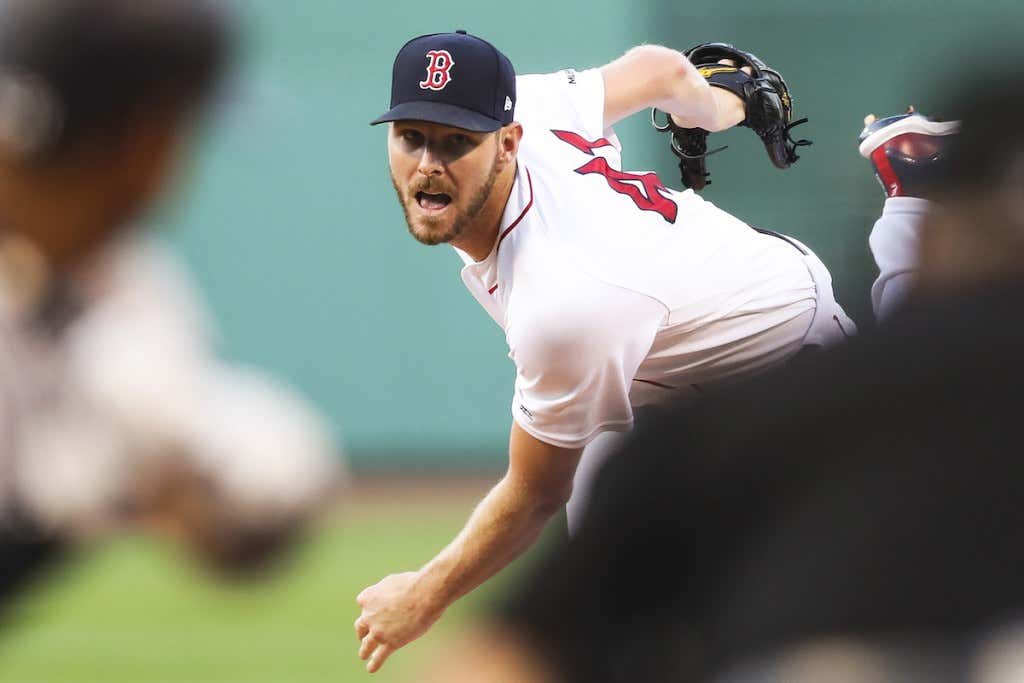 You never want to hear your star pitcher’s name in the same sentence as Dr. James Andrews.

It’s like, when I say peanut butter, you say jelly. When I say bacon, you say eggs. When I say Big Cat, you say mustache. When I say Dr. James Andrews, you say Tommy John surgery. That’s just how it goes. Last August, Chris Sale got a PRP injection in his left elbow, which hurts like a motherfucker, and is often used as a Hail Mary solution before TJ surgery is recommended.

I don’t know about you, but I was sweating bullets waiting to hear an update on this. August was four months ago and we hadn’t heard a damn word. We were told Sale was supposed to have a followup meeting six weeks after the original PRP injection, which was first reported on August 19. So, six weeks from that point would’ve put us at September 30. It’s December 2.

Luckily for us, the delay had nothing to do with any setbacks. The Red Sox just felt that there wasn’t a need to rush the process with Boston out of postseason contention. Per Rob Bradford of WEEI.com, here’s what we know after Sale’s most recent meeting with Dr. Andrews AKA the Grim Reaper of Pitcher Elbows.

According to Red Sox Chief Baseball Officer Chaim Bloom the pitcher’s long-anticipated follow-up with Dr. Andrews, who administered a PRP injection into Sale’s elbow in August, took place the week prior to Thanksgiving. The results were positive with the starter getting the go-ahead to immediately start throwing with an eye on participating in spring training.

While the visit with Dr. Andrews was originally scheduled to take place six weeks following the PRP injection Red Sox general manager Brian O’Halloran said at the recent GM meetings that the timetable changed when it became evident Sale would not be needed for postseason duty.

“What changed is we fell out of the playoff race,” O’Halloran said. “We decided to slow it down. It was our decision, it was nothing to do with how things were going. The rehab has gone very well and Chris is right where we want him to be, pending that appointment with Dr. Andrews. When we gave a six-week range, that sort of lined up with the end of the season, and we were holding out hope at that point that we still had a chance to be a postseason team. Very quickly after that, that changed, that didn’t happen.

Good news, good news. Here in Boston, though — and you’re never gonna believe this — we have a tendency to be negative. I know! It’s crazy, right? Well, it’s true. Sale is a guy who has been statistically one of the best pitchers of his entire generation. One bad season, and some folks are ready to write the guy off forever. I understand the “what have you done for me lately?” state of mind, but let’s pump the brakes on Sale’s days of dominance being behind him.

The career-worst season for Sale coinciding with his signing of a five-year, $145 million contract certainly doesn’t help in the court of public opinion. Boston is a brutal market as it pertains to expectations versus dollars allocated. But I’d like to think that the smart fans know that Sale’s shit 2019 campaign has a decent chance of being an aberration.

The homers per nine were a career high, and that’s really what killed Sale. His ERA ballooned and took away from everything else being on par with All Star seasons he’s had fairly recently. Now, if you wanna talk velocity then I’m all ears on that one. I, like you, am very curious to see what that radar gun looks like in 2020, because we’ve essentially been on velocity watch with Sale on the mound since the postseason in 2018.

It’d sure as hell be nice if he returned to blowing hitters away with 99 MPH, but I’ll leave you with this — Sale’s average fastball velocity in 2019 was 93.75 MPH. It was the worst season of his career. Sale’s average fastball velocity in 2016 was 93.64 MPH. He finished fifth in the Cy Young voting that year. Velocity is more of a luxury for him. He can pitch with a fastball that’s on the lower end of mid-90’s. He’s done it before and was very successful doing so. The man’s gotta locate, which prior to 2019 was never an issue for him.

I’m expecting a big time bounce back season for Sale in 2020. Get on the bandwagon now so that you don’t look like an idiot later.