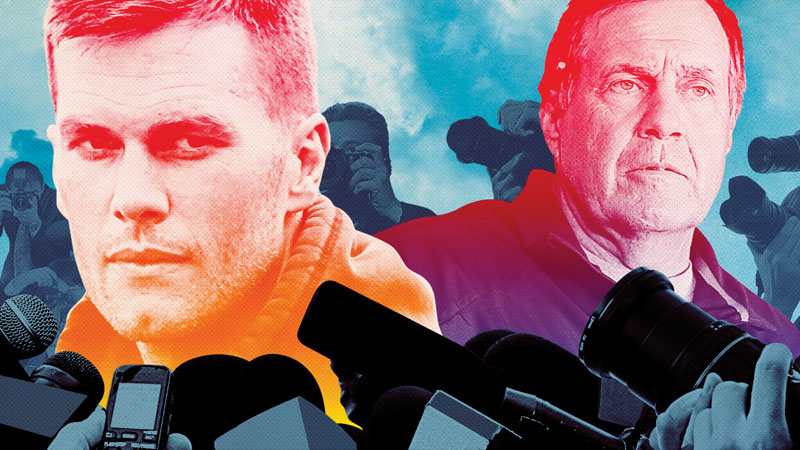 Howard Bryant, ESPN the Mag – When Aaron Hernandez was charged with murder in June, Bill Belichick and Tom Brady, the public faces of the New England Patriots, initially said nothing. Belichick was on vacation. Here was the player he scouted, drafted and rewarded with a $40 million contract being connected to two shootings and three murders, and apparently the coach didn’t think it was important enough to return home. When Brady, general of the red zone, father of three, finally did speak about Hernandez nearly a month later, Bela Lugosi couldn’t have made his first public comments sound more inhuman: “… I have moved on. I’m focusing on the great teammates I have who are committed to helping us win games. The only thing I care about is winning. Nothing is going to ever get in the way of that goal.” … In other words, tough break, Odin Whatever-your-name-was, but Tom has game film to watch. He’s moved on… On July 24, with Odin Lloyd long buried, Belichick spoke for the first time, and the media, defeated and supplicant, all but tripped over themselves in lauding him for being “forthcoming,” “candid” and “heartfelt.” Had it not been so disgusting, it might have been funny. All the great coach — this molder of men — did was finally take a few minutes out of his busy schedule, a month after Lloyd’s last breath, to say he felt terrible that a 27-year-old was lowered into the ground too soon, murdered, allegedly, by one of his players. Belichick was praised for acting like a human being.

Here’s the truth: The Patriots do owe the public, because they and every other sports team in America take from the public, profit from the public, sell their name to the public. The Patriots sell their players not just as athletes but as people whose names fans should wear proudly on their backs… Teams bathe in the fiction that they value character, can spot it and develop it; yet here, when character actually mattered, the great coach and his legendary quarterback looked as small as a hash mark… [T]he Patriots have historically set the bar so low that no one expected any humanity from Belichick. That in itself is an obvious indictment. Here was a coach who talked community while disappearing from it. And if anyone was surprised that a murder could actually get his attention, maybe Belichick was never a leader in the first place.

I’m hesitant to even blog this because I know that this is just Howard Bryant doing what Howard Bryant does all the time: troll with all the trolling he’s got.  I mean, I get that at there’s nothing they love more at the WorldWide Leader than to whip a batch into their palm and Spiderman it into the Patriots’ hair like Multiple Migs in “Silence of the Lambs.”  God knows they never miss a chance.  But Bryant cannot possible be serious with this claptrap, can he?  What exactly is he saying Brady and Belichick should’ve done?  Run back to Foxboro and called a press conference?  Was grandstanding what the situation called for?  Or were they supposed to go to the crime scene and start dusting for prints?  Put on wet suits and help search the lake for the gun?  Bring Odin Lloyd back to life?  Confessed to being accessories because they drafted/threw passes to Hernandez?  Seriously, what in Christ is he saying they should’ve done?

Just as to review, within days of the murder, the Pats kicked Hernandez off their property like he was a Jehovah’s Witness.  They cut him before anyone knew what the charges were.  As for that “people whose names fans should wear proudly on their backs,” they got 2,500 Patriots #81 jerseys off the streets at the cost of a quarter of a million dollars.  But somehow they owe the public more?  Did Howard Bryant say anything like this about the Steelers when Ben Roethlisberger was raping drunk underage girls in dirty bathrooms?  Or the Falcons when Michael Vick was running an interstate dog torturing ring?  Or the Panthers after Rae Carruth killed his babymama?  Were those crimes the result of the lack of humanity/leadership of the coach and some other player? What if say, Skip Bayless goes on a killing spree.  Does that mean Howard Bryant and the CEO of ESPN are terrible people?  Or is all of this just what I think it is?  That most of ESPN hate the Pats and will never pass up a chance to make them out to be despicable human beings.  So they’ll publish dreck like this even while they sit there grabassing with their newest co-worker, Ray Lewis. Had it not been so disgusting, it might have been funny.  @JerryThornton1

PS. Shame on me for neglecting to mention that Howard Bryant is a known wife beater.  The perfect guy to lecture Brady and Belichick about their lack of morals.  [h/t @tbrdshw]