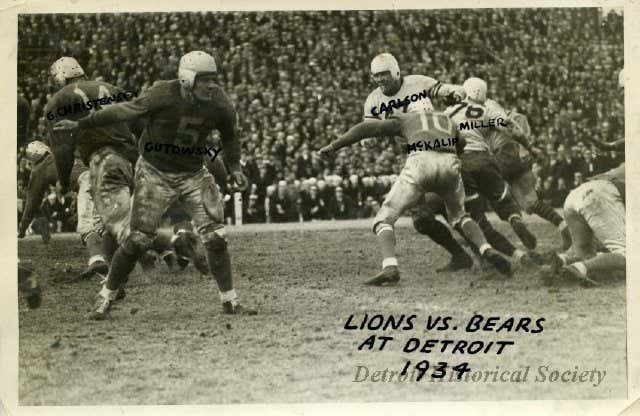 A new tradition is born as the Detroit Lions host their first Thanksgiving at the University of Detroit Stadium. The game is also broadcast nationally on NBC radio. The game was vital in deciding the Western Division in the NFL, as the Bears entered 11-0, while the Lions were 10-1. In the end, Chicago would emerge victorious, 19-16, as Bill Hewitt caught a touchdown pass from Bronko Nagurski.

The Detroit Lions were in their inaugural season, having played previously as the Spartans in Portsmouth, Ohio. The team was owned by George Richards, who looked to promote his team with a Thanksgiving Game. He also sought to promote the league as he arraigned for the game to be aired on several NBC radio affiliates, making it the first national radio broadcast of a regular-season game in the NFL.

The Chicago Bears and Detroit Lions had been battling for the Western Division all season. Neither team lost in the first ten games. The Chicago Bears coached by George Halas remained unbeaten, beating the Chicago Cardinals 17-6 on the Sunday before Thanksgiving. The Lions coached by Potsy Clark, meanwhile, suffered a letdown, losing to the Green Bay Packers 3-0.

The Thanksgiving Game drew a record crowd of 26,000 to the University of Detroit Stadium. The Lions needed a win to have any hope of playing in the NFL Championship. Act Gutkowski scored a first-quarter touchdown to give Detroit a 7-0 lead. The Bears answered in the second quarter, with Gene Rozani hauling in a pass from Keith Molesworth. Glenn Presnell hit a 34-yard field goal to put Detroit back in front. Later Gutkowski scored a second touchdown, as the Lions built at 16-7 lead at the half.

The Bears defense put the clamps on Detroit in the second half, while Jack Manders hit a pair of field goals to cut the deficit to 16-13. In the fourth quarter, the Bears took the lead for good when Bill Hewitt caught a 2-yard touchdown pass from Bronko Nagurski.

With the win, the Bears clinched the West and a spot in the NFL Championship for the second straight season. The Bears would finish the regular season 13-0 beating the Lions again three days later at Wrigley Field. The Bears hope of a perfect season was ended with a loss to the New York Giants in the title game.