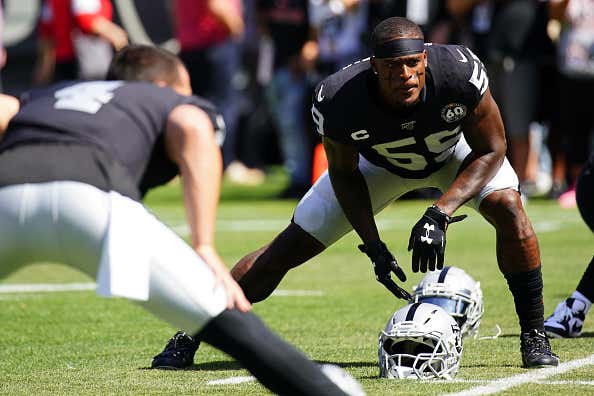 Note: This one is a few days old, but somehow it only just now crossed my cultural radar. But today is the kind of day to clear stuff out of my inbox. Besides if it's news to me, it's news. I apologize for nothing.

Source - Although [Vontaze] Burfict has been laying low for most of his suspension, the linebacker did come out of the woodwork recently to do an interview with The Athletic, and let's just say, it seems he had some bottled up emotions that he wanted to get off his chest, and most of those emotions had to do with the NFL and some key league executives.

For one, Burfict made a shocking accusation that probably isn't going to go over too well in the league office: The Raiders linebacker said he believes that some NFL games are rigged. According to Burfict, the league is able to pull it off because the officials can control the outcome of any game. Burfict's opinion on the subject came up when he was asked if he had been watching any football during his suspension.

"I honestly think some of the games are rigged," Burfict said. "The refs pick and choose when they want to throw their flags. There are flags on every play. The refs determine the outcomes of games, so I just chose not to watch it for the most part."

Say what you will about Vontaze Burfict. And if you're like me, you'll say he's a feral, bloodthirsty maniac and a habitual criminal injurer who has raised cheapshots to an art form the way some serial killers like to display their victims. And every time he steps on a football field, I'm worried for the safety of anyone within mile radius.

But you have to hand it to him. Nobody plays the bad guy like he does. It's possible no one ever has. He's the patron saint of football villains. The ultimate real life wrestling heel. The NFL's Prince of Darkness. I mean, it's one thing to bite the hand that feeds you by sitting there on suspension, once again not drawing a paycheck for about the 100th game of your career and calling the Commissioner potty mouth names:

It's a whole other thing to question the precious integrity of Roger Goodell's little utopia. That is sticking your tongue to the third rail of pro sports. Something you don't ever want to say, hint at, endorse or imply with your body language in you ever expect a future in the game. Goodell would rather you call his mom a King Kamehameha beyotch:

… than ever give the slightest impression you think his football games are not on the level and risk bringing his whole Jenga tower empire crashing to the floor.

So this is a ballsy statement by a guy serving an open-ended suspension. Ballsy. Reckless. Self-destructive. And probably career suicide. And while I haven't had much in the way of respect for the player or the man over his career, there's something about this that's almost admirable. At least from where I'm sitting, which is not dependent on Vontaze Burfict to keep a roof over my head or food on my table. Something old school. The kind of attitude we haven't seen since the classic Bad Boys who reveled in their badassery, guys like Conrad Dobler and Bill Romanowski. Guys like Burfict who believed what Milton wrote, that it's better to rule in Hell than serve in Heaven. Even though Burfict will probably never see a field again, somewhere Al Davis is proud.