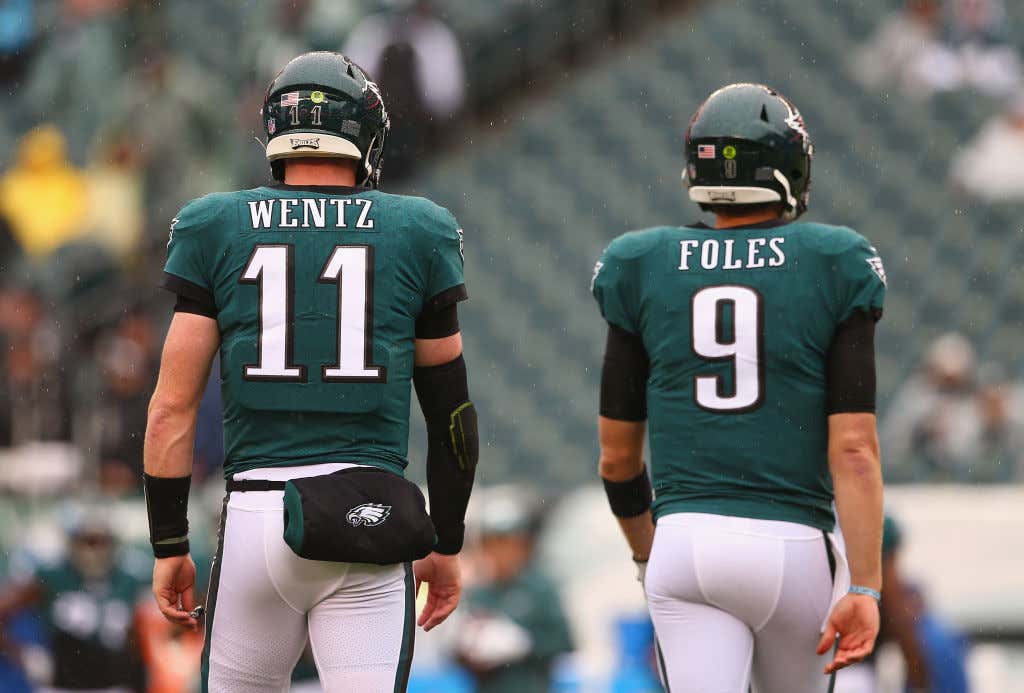 Thanksgiving in the Delaware Valley is going to be especially volatile this year with the current state of Philly sports. The Eagles are an absolute mess right now and we just got done watching the worst performance of Carson Wentz's career. Immediately following that, the Sixers go out and lose in heartbreaking fashion to Toronto after Joel Embiid had the worst performance of his career and put up 0 points in 32 minutes. The Phillies are trending in the right direction but it's still hard to sell yourself on them. And right now the only team that currently isn't total dog shit is the Flyers, and chances are there are only like 3 or 4 other people at Thanksgiving who you can actually have a conversation about the Flyers with.

Everybody is already going to be showing up to Thanksgiving dinner in an awful mood. Things will continue to get even worse if Dallas starts to beat Buffalo at home (Jason Garrett is 0-10-1 ATS as a home favorite after a loss in November via @BobWankelCB). So you're going to have your family together in a room, everybody is already going to be in a miserable mood, the booze is going to be flowing, and you just know that the conversation is eventually going to devolve into an all out war between the Pro-Wentz side of the family and the Pro-Foles side. Which is why I'm here right now to help you navigate through the argument because even though the Eagles aren't winning shit this year, at least you can win this argument.

1. Right out of the gate, get personal.

This is all about setting the tone. I know that the conversation is about Wentz vs Foles but that doesn't mean that you can't use this argument as an opportunity to take a shot at somebody. You know that the argument is going to get personal eventually anyway, so why not just come out of the gates swinging and immediately put the other side on the defensive? You need to figure out your opponent's weakness and attack them where it hurts the most. The moment you throw them off with an all-out personal assault, that's when your points about whichever quarterback you prefer will really start to land.

2. Only bring up the highlights of your quarterback and completely ignore the blatantly obvious downfalls

If you're Pro-Wentz, then obviously you're going to bring up the first 13 games of that 2017 season and mention how the Eagles don't get home field advantage throughout the playoffs if it weren't for Wentz playing at an MVP caliber before tearing his ACL. You are going to completely ignore 2018 because that was the year after Wentz's ACL surgery and you're going to say that it doesn't count because he was rushed back and wasn't 100% healthy. If you're Pro-Foles, you're obviously going to base the majority of your argument on the NFC Championship game and the Super Bowl. Pretty obvious, I know. But what you're not going to bring up is how Nick Foles actually looked like shit during the 2018 preseason, in those first 2 games that he played in 2018, and then if it weren't for a Cody Parkey double-doink then he would have led the Eagles to a first round exit of the playoffs last year. You're also not going to acknowledge the fact that Jacksonville fans fucking hate Foles right now and want him gone already.

Basically all I'm saying here is that you need to judge whichever quarterback you're backing in this argument at their absolute best, and just ignore how bad they've also been.

This argument is going to get ugly, okay? There are going to be plenty of casualties along the way. And while you'll want to physically and verbally beat the shit out of the other side, you also need to take a quick little break to get everybody on the same page just so you can recharge. That's where Donovan McNabb comes in. If you randomly bring him up during the argument, then everybody can get on the same side and you all can just shit on McNabb for 5 minutes or so. Once those 5 minutes are over then it's back to bashing each other's brains out. But for those 5 minutes, at least a few casualties were spared. Maybe that's a good time to break out the dessert platters.

4. Just make up stats to support your argument

It's Thanksgiving. Nobody is going to be sitting around on their phone during this argument to fact check you. By the time somebody would even get around to checking that stat you just made up, Thanksgiving is already over and you won't see that person again until maybe Christmas or next Thanksgiving. You're not there to be right, you're there to win the argument. That's the type of mentality that gets you on shows like First Take.

5. If you're feeling overpowered, just shift gears to shitting on Howie and the receivers

It's always important to have an exit strategy. I know that we want to win every battle we enter but the truth of the matter is that sometimes you have to lose. Maybe your family is just a bunch of mouth-breathing bozos who can't mentally grasp the idea that the run Nick Foles went on during that Super Bowl was completely and totally unsustainable. It doesn't change the fact that they're wrong, but they just have you beat in terms of numbers. Your allies are quickly dwindling. You feel yourself becoming a one man army and you can't hold off the masses anymore even though Carson Wentz is the better quarterback. So if this happens to you, there's no shame in finding a way out of the argument so that you at least get out of their with your life.

So pretty much in the same vein as bringing up McNabb, just start shifting your argument against this bullshit roster that Howie Roseman has assembled and how neither quarterback would be able to do anything with this offense because this team doesn't employ any receivers who can actually catch. Toss in a "Go Birds" at the end and maybe you guys will even continue to be on speaking terms for rest of the year.

And there you have it. Buckle up, folks, because it is going to be a bumpy Thanksgiving. Really our only hope right now is that Dallas goes out and gets worked by the Bills. Have a happy Thanksgiving, fuck Dallas and Go Birds.