Alright so just three weeks ago, the Browns were sitting at 2-6 and you all decided that this was the biggest bust of an overhyped team since Vince Young, Mike Vick, Nnamdi Asomugha, Dominique Rodgers-Cromartie, and Jason Babin were supposed to make the Eagles a Dream Team back in 2011.

There was supposedly only an 8% chance that the Browns could make the playoffs after losing to the Broncos, and their only hope was to rattle off 8 straight wins and finish 10-6. Well, uhh.....you can't win 8 straight if you don't win 3 straight first...

Don't talk to me about strength of schedule (yet). Two of those teams would be in the playoffs if the season ended today. In fact, the AFC Playoff Picture looks rather interesting at this moment…. 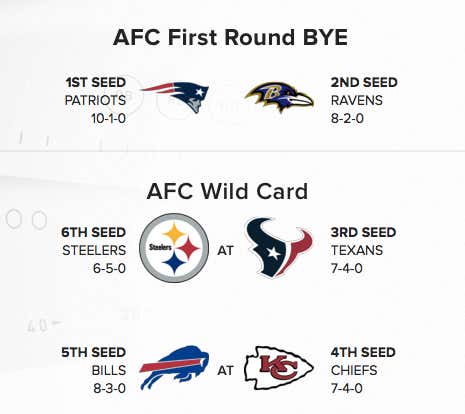 Yep, I was right. The Browns are 1 game out of the playoffs.

And you can tell me all you want that the Steelers, Raiders, Colts, and Titans are all 6-5. That's fine. Now I'm ready to talk strength of schedule.

Week 16: Baltimore (8-2) but we already beat them by a thousand at their place

Uhhh I don't need a GPS to tell me that the Browns path to the playoffs is clear as day.

And I'm going to be like B Rabbit in 8-Mile. I know what you're all about to say against me. It was the Dolphins. It was the Steelers. It was the Bills. Quit celebrating wins against bad teams. Ummm, then when can I celebrate a win? Because there's not one good team left on our schedule.

The fact of the matter is that the Browns now have a win and you're in game this week against the Steelers. Because we're not losing to the Bengals, Bengals, Ravens, or Cardinals. Baker says next week will be a playoff type atmosphere in Pittsburgh. I agree, except, wouldn't you want to know who your starting QB is for a game of this caliber? Well, at least the Browns do….

I can just see it now. "The Mason Rudolph Revenge Game". He might go for 8 interceptions.