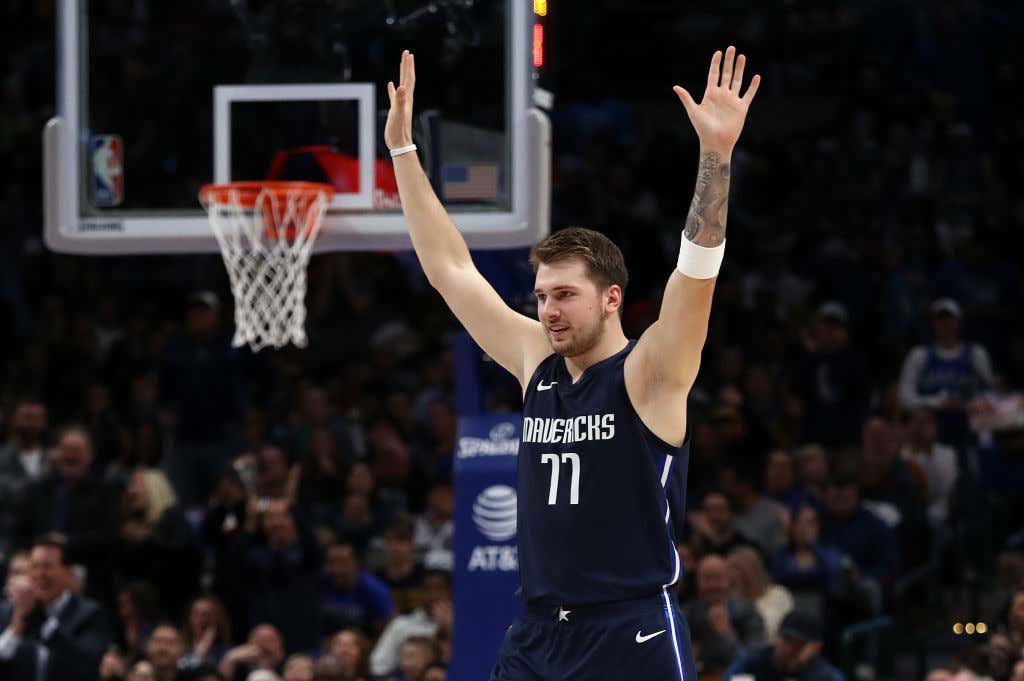 Good morning everybody happy Monday and welcome back to another edition of Last Night In The NBA where we bring you up to speed on everything that went down from the night before in the Association. It was a relatively light day with only 5 games on the schedule, but much like Saturday night a bunch of them were close, there was more late game drama with some NBA history sprinkled in. Chances are you spent all day watching football and may have missed the action, and if so here's what happened.

Safe to say a matchup between MVP candidate James Harden and MVP candidate Luka Doncic was must watch stuff. In one corner you have James Harden who is averaging like 40 a night and has been on a complete tear. In the other corner you have Luka Doncic who is showing to be some sort of hybrid between LeBron James and Larry Bird, also someone who has been on a complete tear. Well it took about 15 seconds for us to know we were in store for another special Luka performance when he had 8 points in a blink of an eye, and we sure as shit were not disappointed

How dare Luka get lazy and not snag 4 more rebounds. It's not often that something will take your attention away from football on a Sunday afternoon, but what Luka was doing in HOU was one of those moments. What made this impressive isn't just the final stat line, but once HOU made a run late to bring them within 5, it was Luka who personally responded and pushed the lead back out. To that on the road in HOU where they were 6-1 certainly isn't something you see everyday. You out-duel James Harden in a huge western conference matchup in his own building, that shit is impressive. Every time he steps on the floor it ends up being some sort of ridiculous performance in terms of NBA history, and last night was no different

and then there was Porzingis' double double

and suddenly the Mavs have won 5 in a row. Why is that important? well if you look at the top 5 seeds in the West, all have at least a 3 game streak going and four of them have at least a 5 game streak. We're starting to get a little crazy when it comes to Western Conference seeding.

For HOU, as you can expect it was mostly Harden/Westbrook who weren't terrible, they just weren't efficient

but we're seeing the one big time issue rear it's ugly head again when it comes to the Rockets, and it's their defense. This is the 18th ranked defense in the NBA which is not exactly the level those successful Rockets teams were at, and teams in the West are too good to think you can give up 137 in regulation at home and think you're going to pull it out. It also doesn't help when you only get 6 points from your two players who play any sort of real minutes off the bench, but they gave up 45 in the first quarter and then never really recovered.

Hey it Nets are back to .500 and are on a 3 game winning streak! Wonder what changed? I'll let you look that up. Nothing like beating your in city rival on their home floor in hilarious fashion that included just hitting them with the ball on an inbounds play

and then there was the whole Spencer Dinwiddie looking fantastic thing

and honestly this looked more along the lines of the Nets we saw last year. Things were balanced with Dinwiddie leading the team with 17 FGA but two other starters having 14 and 13 FGA respectively, and all five starters finished in double figures

They have CLE up next before their date in BOS, and we know Kyrie won't be playing in any of them so I'm thinking this streak could last at least one more game.

For NYK, I would say this is embarrassing for the Knicks to lose to the Kyrie-less Nets at home, but it's the Knicks so what do you expect. Can't be embarrassing if this is just the norm. Another night where Mook did most of the damage, and cut them some slack RJ Barrett didn't play because he was sick

For those keeping score at home the Knicks have lost 4 of 5 and those losses have been by 1, 5, 7, 2 points. Technically they are right there and perhaps that's the more frustrating part. Instead, they are 4-13 and 3 games under .500 at MSG. Not great! You don't see teams at home lose all that often when they shoot 46/51% from the floor and make 18 3PM. I guess the 34-16 FTA difference had an impact, where Dinwiddie nearly took more than the entire Knicks team. That's also not great.

Look who came back from the dead! Shoutout SAC for turning their season around, others in their conference (cough cough POR) could learn a thing or two from this. They've won 5 of their last 7 and even survived a poor Buddy Hield outing (4-14) to snag this road win. How did they do it? Well for starters Harrison Barnes was nearly perfect

finishing with 26 points on 7-8 shooting, then there was Bogdanovic off the bench who continues to be an absolute force and someone who is earning himself so much money this summer with every great game he has

and they did a great job of actually showing some defensive life in the fourth quarter against a team that owns one of the best offenses in the league. The Kings hung around early and used a strong third quarter to get some separation and don't look now but this team is only 0.5 games behind the 7 seed.

For WSH, shoutout Bradley Beal and Isaiah, they showed up

I'll say this about the Wizards, they may not win a ton, but this team plays hard and is not someone you can just gloss over on your schedule. They are showing to be better than most thought, and there is some promising young talent on this roster. So their defense sort of let them down, that's not surprise, The surprise was this was even close to begin with.

Man, rough patch for the Suns right now. They've lost 4 of their last 5, including two brutal close losses to SAC/NO. It's tough when Baynes and Rubio are still out, and even harder when you have to go into DEN and play perhaps the second best team in the entire conference. Add to that Devin Booker going 5-13 and I'm surprised it was even this close. A lot of that had to do with what Cheick Diallo gave them off the bench

but to beat a team like DEN you need your best players to absolutely bring it. Booker and Oubre Jr combining for 9-25 isn't exactly going to cut it. Things sort of fell apart for PHX over the final 24 minutes, which was tough because they did have a 5 point lead at the break. They showed a good effort which is great and all, but this is the West and suddenly the Suns are on the brink of falling out of the top 8.

For DEN, like I said, everyone at the top of the standings has a nice little win streak and DEN is one of the teams riding a 5 gamer. This was a typical Nuggets performance with balance, and they didn't even need a crazy night from Jokic who finished with just 8/13/5 on 9 FGA. Instead it was a trio of other starters who did most of the damage

and then some deep second unit production with Plumlee and Monte Morris finishing in double figures and as a group they were efficient and productive. Only 10 TOs on the night, you aren't going to beat DEN if their shots are falling like they did in this game (47/45%), and they don't play careless with the ball. To think they can survive with off nights from both Jokic and Gary Harris just goes to show you how deep this team is and why they are a real contender in the West.

Yeah I mean this was over almost immediately, and who can blame NO. It's not all that easy to hang with a healthy Clippers team playing at home where they are now 11-1, but at least they had their moments. Like Brandon Ingram playing well

This is a team that is starting to get healthy again and I'm sure they'll turn things around a little bit when they get better talent back, but 2-7 on the road is rough. The issue was really the second unit, it's not great when your top rotation players are -20, -26, -22, -27 off the bench. That's how you find yourself on the wrong end of an absolute beat down.

For LAC, what if I told you Kawhi and George combined for 13-39? You would think LAC struggled right?

but then you remember they unleash starter caliber talent off their bench with Lou Williams and Montrezl Harrell who guess what, were fucking unstoppable

I'm sorry, but nobody else is putting out this sort of consistent production from their main second unit rotation players. It's ridiculous and it's what makes this Clippers team so terrifying. Their starters stunk offensively for much of the game and it didn't matter one bit. What a luxury to have. Again Kawhi/PG13 went 13-39 and the Clippers never had a quarter under 28 points. Damn.

And that's it! You're now all caught up with everything that went down last night in the NBA. We're back tonight with a full slate of 11 games so you know the drill. Have a great Monday!