That beauty, one of many examples of too-many yards after the catch - a consequence of the tremendous amount of missed tackles, was officially the nail in the coffin.

And frankly, thank God for it.

Because of that embarrassing performance from a team that is was alone at the top of the NFC North, Tim Boyle stepped in on the following drive, effectively putting an end to Aaron Rodgers' night with 5 minutes left on the clock.

A lot can happen in 5 minutes (no, I'm not talking about a comeback - I have eyes after all), and the ONLY thing that could have made this evening worse was an unnecessary injury to #12... in a completely hopeless game. A game that makes the Packers Chargers game good look competitive. A game that can only be rightfully be described as an absolute ass beating. (If I said something similar to this after the LA game, I was a naive fool who didn't know what an ass beating really looked like.) 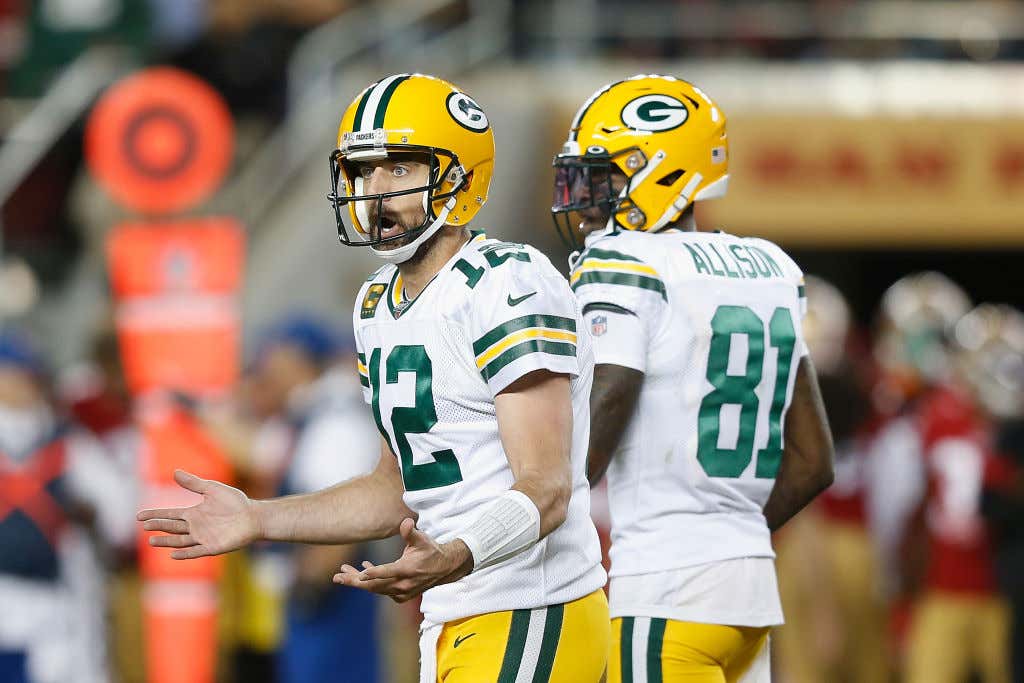 Coming into tonight, the Packers were healthier than they've been ALL season. The bye week gave them some much needed rest and preparation time for a game that could potentially carry a lot of weight down the road. In Rodgers' words:

"I think you're just in denial if you don't think about the implications with a 'Dub' or an 'L' this week and how that affects stuff down the line. That's why I said, the way we look at it, we're going to have to win there one time the rest of the year. It would be nice to get it done this week."

At 8-2 facing a 9-1 team, I'd say those are pretty reasonable expectations. Especially if you're Aaron Rodgers and your team is playing mistake-free football and leading the league in NOT turning the ball over.

Naturally, Rodgers fumbled the ball at the GB 12 on the very first drive of the game. Niners scored a couple of plays later. Soon after the team's cumulative health dropped about halfway into the 1st quarter, when Bryan Bulaga was injured and out for the rest of the game, because of course. Then Geronimo Allison dropped balls like they were hot and Jimmy Graham had a nice catch that wasn't a catch.

In total the Packers offense ran 70 plays... yet were somehow 0-14 on third downs until the second-to-last play of the game. For 59 MINUTES Green Bay did NOT convert a single 3rd down. Not one. (Though they did convert a 4th down one time, not to brag.)

On the other side of the ball (aside from the stunning display of defensive skills that lead us into this blog), well, Jimmy G wasn't exactly throwing bombs left and right. The 49ers offense was ALSO not converting 3rd downs... but the Packers defense still managed to let 'em put up 37.

Whatever they needed to have tonight, whatever that "it" is, they didn't have it. This was Matt LaFleur's time to shine against his bff/ex-boss/offensive coordinator, Kyle Shanahan. In fact, the matchup was SUCH a big deal, Mike Shanahan was actually going to leave his paradise in San José del Cabo, Mexico to bear witness to it.

Unfortunately, the student did not become the master.

And if Rodgers is right and Green Bay is "going to have to win there one time the rest of the year," well, let's just hope the remaining 5 games play in their favor.

Because the West Coast is certainly not their best coast.