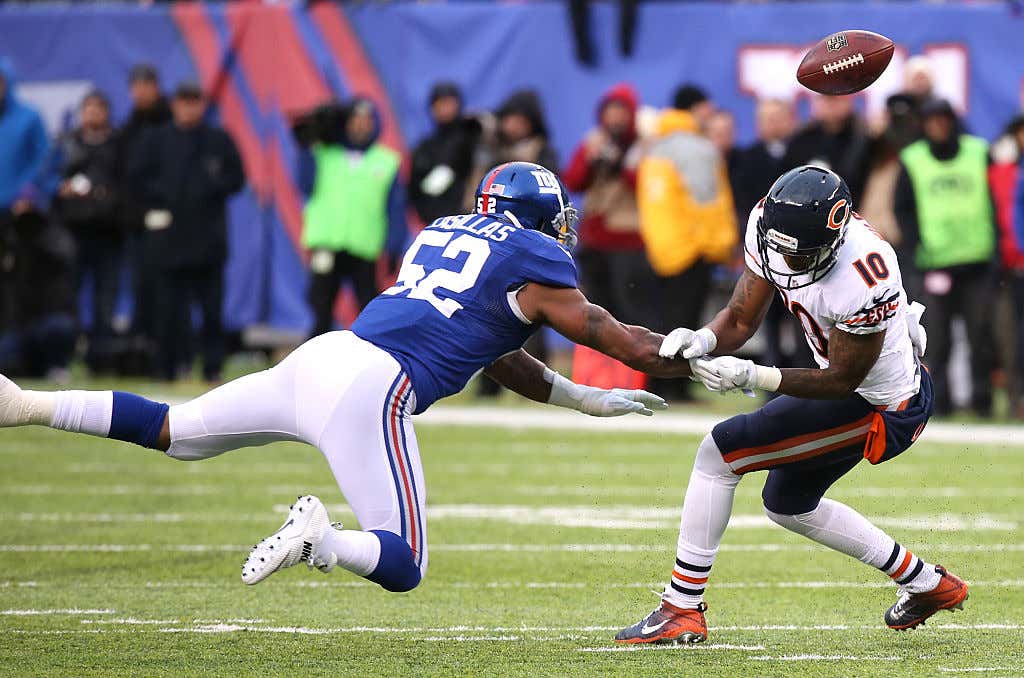 Thanks to the bye week, most Giants fans have forgotten Big Blue being slowly slanted to death on their way to losing to the Goddamn Jets. Unfortunately, NFL teams only have one bye week during the season, so we are back to latching onto any positive plays Daniel Jones puts up followed by ripping our hair out as the defense gives up a score because of a miscommunication, bad tackling, something DeAndre Baker did, or a combination of the three.

I would say this may not be the case because the Giants are playing against Mitch Trubisky and the Bears offense today. But lets be honest. The Giants defense is currently a Get Right defense and Trubisky putting up a handful of touchdowns against this secondary wouldn't surprise me in the least. I also wouldn't be shocked if the defense plays good well better than bad coming out of the bye and Matt Nagy hitting Trubisky with a steel chair so he can turn the keys of the offense over to Chase Daniel. Granted, Daniel lost to the Giants last season in a game that murdered countless suicide pool entries and also happened to be what was likely Eli Manning's last win as a Giant at home. Okay, now I'm getting sad even before I start watching this dog shit game.

On the other side of the ball, there are only 2 things I am hoping for.

1. Saquon getting back to his pre-injury form, which means hurdling full-grown superhumans like he did in last season's Bears game.

Shumur not running Saquon into the middle of the line may help the running game's case as well. We'll have to see.

2. The offensive line protects Daniel Jones well enough that he doesn't set the single-game fumble record against Khalil Mack & Co. Jones has had success against this Bears defense earlier this year.

However, I'm pretty sure not one Bears starter was in the Tri-State Area for that game let alone MetLife Stadium. So those highlights can be taken with a grain of salt.

Actually I am also hoping that Sterling Shepard can open up the offense and avoid any hard hits to the head since he is active for the first time in months today following two concussions in a month while also hoping my guy Rosas gets back on track in a place kickers go to die. But in all honesty, my little lamb Daniel not getting his block knocked off during the game is all I truly care about in a game I'll be fine with whether the Giants win or lose because it's officially #PlayingForTheDraftPickSZN.

According to Gas Money Bob's preview blog, there will be no Bear Weather in Soldier Field today, which is a nice bonus for a rookie QB starting on the road. May the best team win and I hope my pals in the Barstool Chicago office don't talk themselves back into Mitch if he looks good against the donkey defenses of the Giants and Lions over the next 5 days because I like those sweet boys way too much for them to get back on the Trubiskycoaster just when it hits the Bears December schedule part of the track against the Cowboys, Packers, Chiefs, and Vikings.