I was driving when this news broke and at first all I saw was 3 years, $50MM.  I let out an audible “fuck” when I saw those figures.  It just seemed WAY unnecessary for a 33 year old DH who masquerades as a 1B.

Then I saw the contract’s structure:

1. The new deal wipes out the ~$18MM qualifying offer he had for 2020.  With the $5MM signing bonus, he’ll make $1.8MM or so less in 2020 than he would have if they didn’t agree to this deal.  This was a loyalty play more than anything.  I’m all for loyalty, but it also needs to be curbed to an extent in the business world.  Since he did take the QO, it’s basically a 2 year, 33MM extension.

2. I’d be STUNNED if he got anywhere close to 3/$50MM on the open market.  The last year being deferred helps for sure, but he’s been a sub 2 fWAR player 3 of the last 4 years.  He’s a solid hitter.  That’s it.  Good power, but doesn’t walk enough and is a brutal fielder.

Do I like it?  I don’t HATE it but I also I do NOT love it.  On the bad contract to good contract spectrum I’d say it falls right in the middle with a skew towards the bad side.  If it were up to me, the Sox would have had Abreu ride out that ~$18MM 2020 contract and he’d be reassessed after the 2020 season.

In the end, I’m sure he’ll put up his standard 30 dinger, 100 RBI season in 2020 which is obviously more than fine.  His contact profile is still elite: 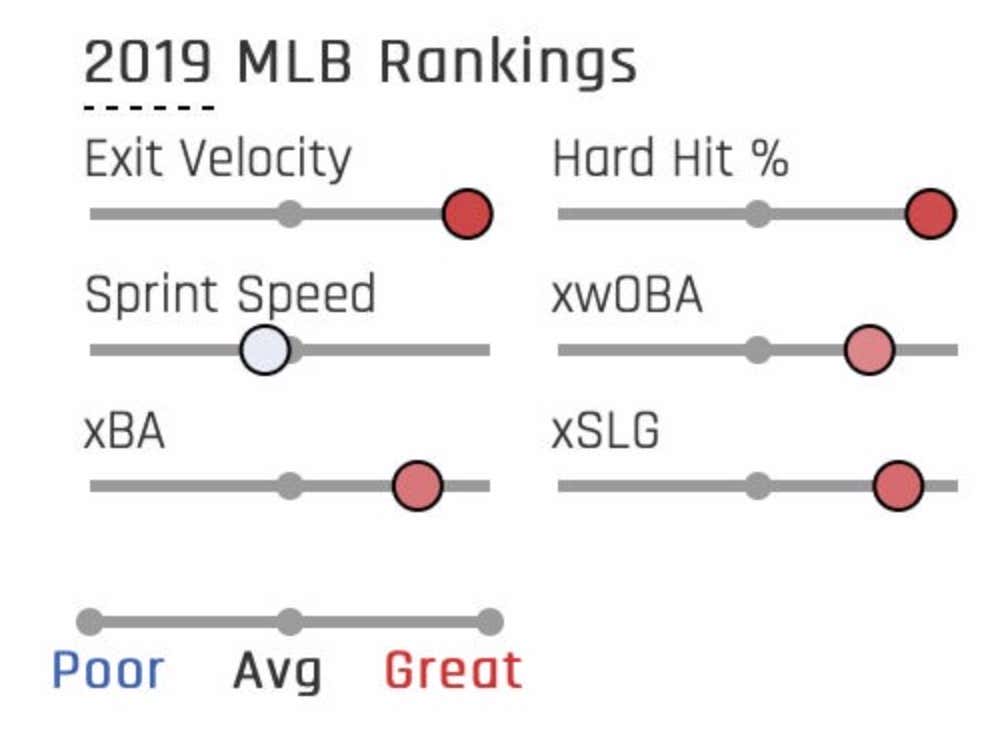 Just get him off 1B as soon as possible.  And if what I’m most worried about come March is this deal, that means some combo of Wheeler, Castellanos, Pederson, Haniger, etc. are in Chicago and paired with an already inked Yasmani Grandal.  If that’s the case, then who gives a shit?  Not me, not whatsoever.  I just feel this deal was unnecessary at this very moment.  But don’t take it from me, take it from someone who doesn’t give a shit about the White Sox at all:

Now I disagree that Abreu isn’t very good – he still rakes.  But I do not feel like this was a great allocation of financial resources.

Side note one – I’m of the opinion that Andrew Vaughn is could be the very best hitter in the White Sox lineup a small handful of years from now and will assume 1B duties come 2021.  I’d imagine Collins is now 100% on the trading block as well.  He’s gotta be with Vaughn waiting in the wings, right?  They have a lot of DH types on their current roster.  Collins for Betts anyone???

Side note two – people are freaking out at me because I don’t love this deal.  That’s fine, to each their own.  Everyone knows he’s more valuable to the Sox than he is to other teams, and Abreu himself was hellbent on returning, so that should have been used as leverage by the Sox IMO.

Also – if Moncada and Eloy NEED Abreu in the dugout because he’s a leader, they’re massive pussies.  People act as if they’d be doomed without him.  Sorry, they wouldn’t be, they’d still be studs.  He’s good for them, yes but again… not at this rate IMO

THAT SAID – this is probably it for Pito.  He’ll more than likely end his career with the White Sox, and he has always been a solid or better hitter for them.  Love him, love his lunch pail attitude.  Just don’t agree with this exact contract.

Go get Wheeler and whoever else, thx