When you think of the top internet stars and social media influencers, the first adjectives that come to mind are probably some variation of "superficial," "narcissistic," "self-centered," "young," and "shitty." But what if I told you the hottest star on the internet right now is a man who’s the polar opposite of all of those things? You’d probably call me crazy, huh? 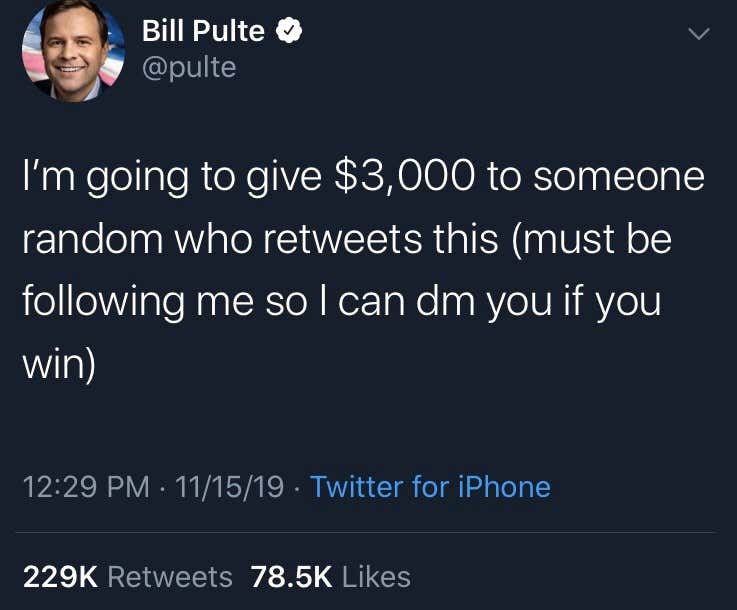 Meet Bill Pulte. He’s the humble, middle-aged philanthropy icon who’s currently blowing up on Twitter due to his charitable works and selfless acts of kindness. Regularly offering large sums of money to random Twitter users — with no stipulations other than they absolutely must follow him so he can continue to skyrocket in popularity on the site — Bill Pulte is redefining what it means to do good deeds for others out of nothing but the kindness in your heart.

Unlike the majority of today’s egotistical internet celebrities, this self-described “inventor of Twitter Philanthropy” doesn’t care about things like follower counts or “clout” or positive media attention from news articles. He only cares about helping other people. That’s it. 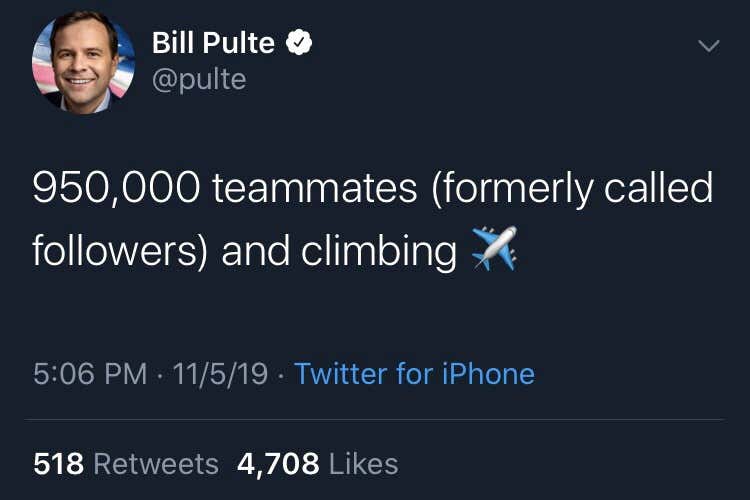 And he doesn’t resort to flaunting his wealth, bragging about his actions, or pandering to his younger audience with trendy memes.

Not sold yet? Then check out this quote from Bill Pulte in a DailyMail news article, which Bill Pulte conveniently quoted in third person on his Twitter account. 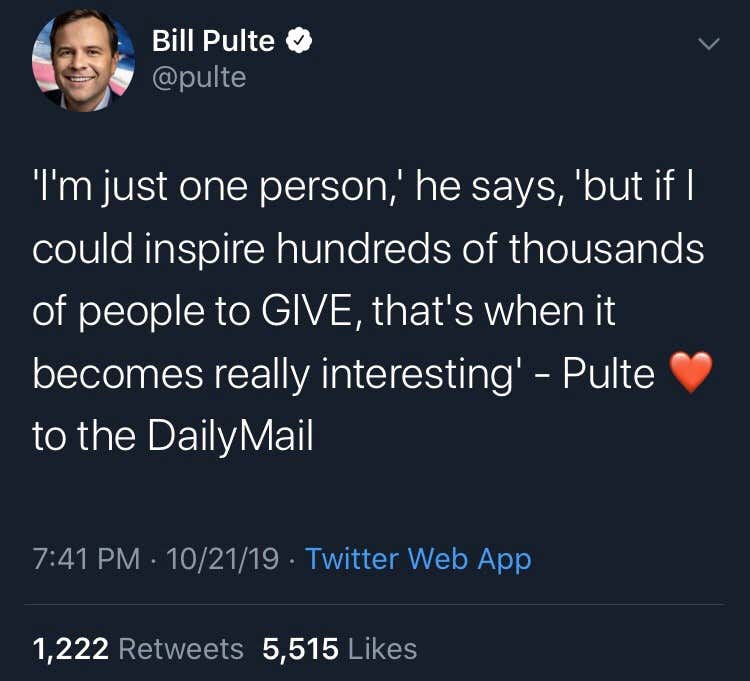 Still not sure about who this Bill Pulte guy really is? Well, I’m glad you — and him — asked.

While it’s no surprise that he comes across as an omnipotent deity or collection of gods, Bill Pulte is actually just one human millionaire.

In fact, he even makes embarrassing mistakes, just like poor people.

Bill Pulte may be a single man in the sense that he’s just one human being, but sorry ladies, he is happily married to an extraordinarily lucky and incessantly awe-struck wife. 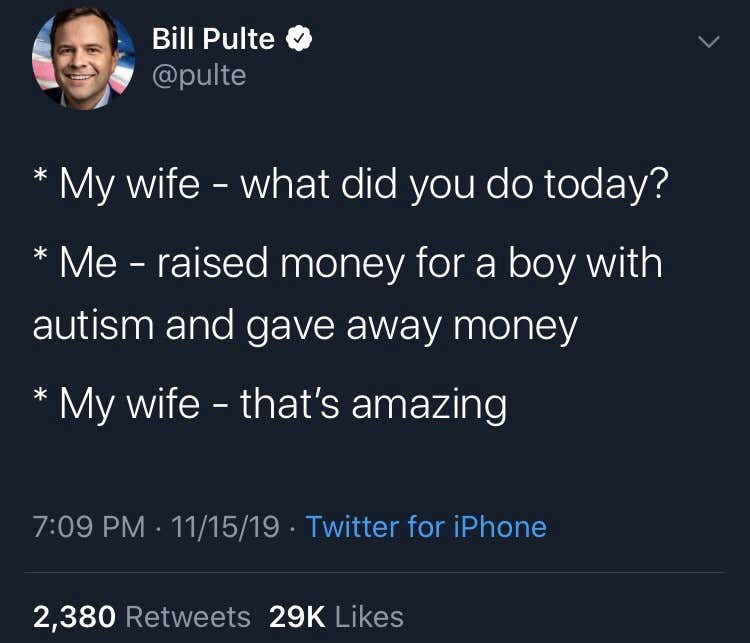 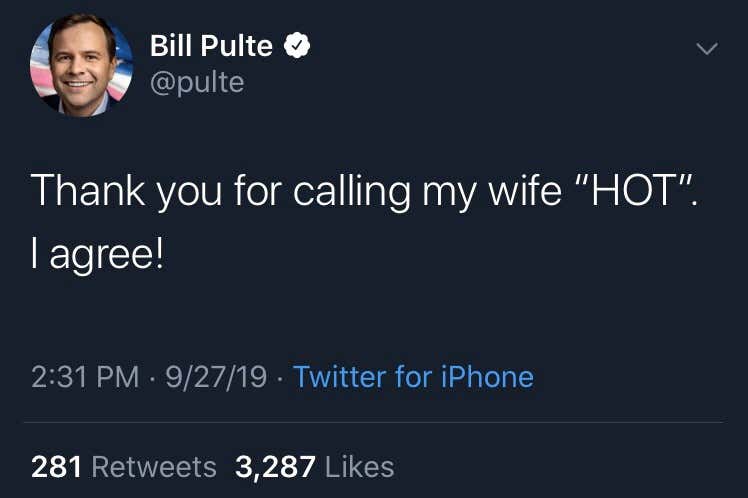 Let me guess — you’re probably thinking, “Bill Pulte’s wife seems cool and chill and hot, but does she love helping others and doing good deeds as much as her famous husband, Bill Pulte?”

Absolutely not. Don’t be silly. While she lazily watches The Umbrella Academy and snacks on saffron on her Bill-funded Plume Blanche diamond-encrusted sofa, her almighty Supreme Being of a husband is donating exorbitant amounts of money to people, with zero ulterior motives. Yeah yeah, I know what you’re probably wondering now: Why doesn’t Bill Pulte just pay for every cause himself? Wouldn’t it be more logical if he just singlehandedly funded everything in the entire world? 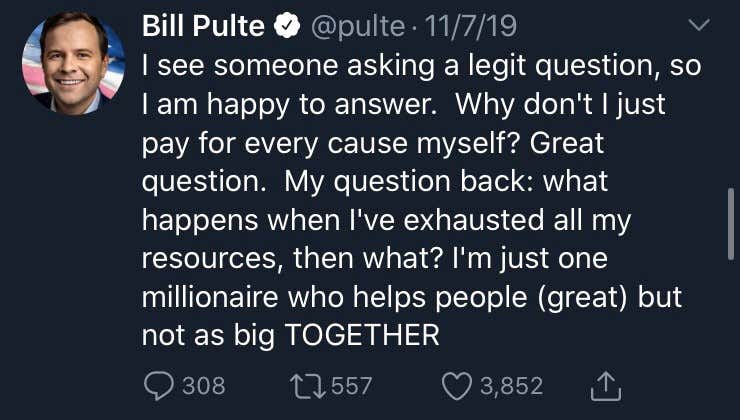 While that is certainly a legit question that “someone” definitely asked Bill, contrary to popular belief, he is actually just one (great) millionaire who doesn’t have an infinite amount of money and resources to pay for everything ever. While Bill Pulte admits that he’s not “technically” perfect, his 1.7 million+ obsessive fans often read his philosophical tweets and think to themselves, “Bill Pulte is perfect.” Conversely, his non followers (AKA his haters) will come across something he tweeted and accuse him of using an omniscient ghost writer to concoct his masterful works. 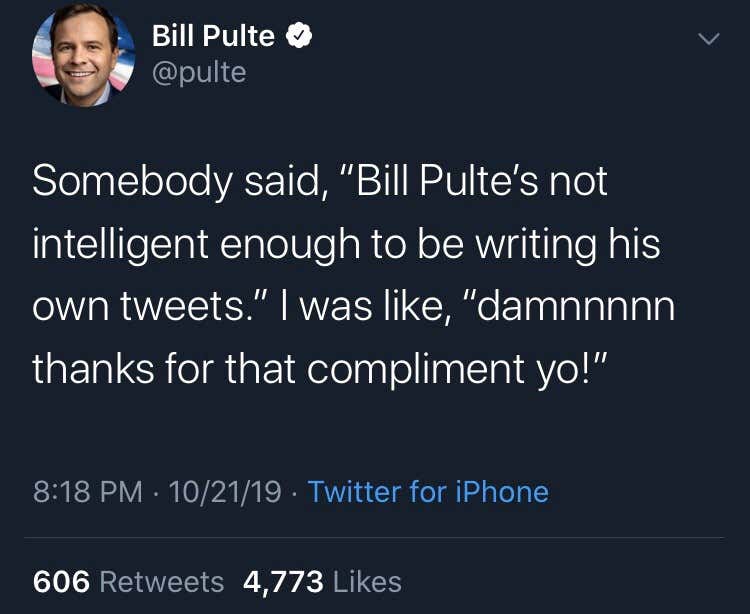 At the end of the day, he’s just an exorbitantly wealthy and golden-hearted human man who may be an exceptional genius, but he still feels regular emotions just like you and me.

Still wondering if Bill Pulte is the guy who donates fuck tons of money to people on Twitter? Well at this point I don't even know what to tell you.