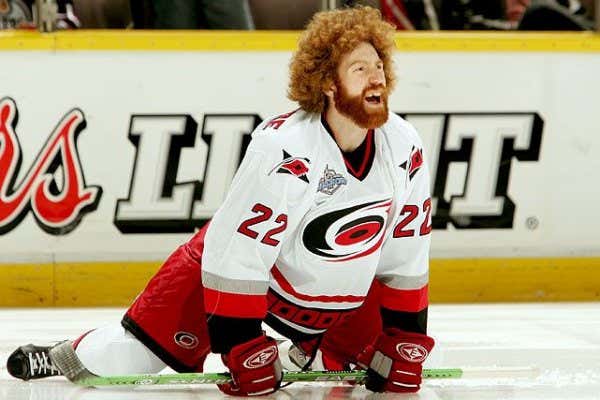 The biggest winner from yesterday's news wasn't Kyle Dubas finally getting to take control of his team. It wasn't the Toronto Maple Leafs who had all clearly stopped listening to Mike Babcock. It wasn't the city of Toronto, who can now have a little hope that their team can turn things around with a coaching change. No no no. The biggest winner from yesterday's Mike Babcock firing was the one and only Michael W. Commodore, first of his name.

Now if you're reading this blog right now, I have to imagine that you've listened to Commie on Chiclets before and you are well aware of his hatred toward Babs. But on the off chance that you're not in the loop here, I think this tweet from last year sums it up pretty succinctly.

The man hates Mike Babcock more than anyone else on the planet, and for good reason. Commie's last real go around in the NHL was when he signed a 1-year/$1M deal with the Red Wings in 2011. After Babcock conned him into signing in Detroit, Babcock buried him in the lineup and only played 17 games. Then he got traded at the deadline to Tampa where he played the final 13 games of his NHL career. The distrust of Babcock goes back close to 20 years ago but the full blown hatred has been brewing for at least 8 or 9 years at this point. So when Mike Babcock got the call from Brendan Shanahan yesterday, we knew it was going to be an all-time Commie Day.

So let's go through to top 5 plays of the day.

5. Straight For The Jugular

No beating around the bush here. Just short and to the point. Mike Babcock signed an 8-year, $50 million contract with the Toronto Maple Leafs. He missed the playoffs his first year in Toronto (which was kind of the point), and then he went on to get bounced in the first round of the playoffs for the next 3 seasons. So 4.25 seasons into his 8-year deal, Mike Babcock doesn't have a single playoff series win in Toronto and gets canned. Definitely can be categorized as a total failure, given the roster this team has.

I have to imagine that Commie has been waiting since the day that Babcock was hired by the Leafs to be able to tell him to pack his shit. Out of all the guys who Commie has told to pack their shit before, this one has to be the sweetest. Just kind of wish he went with "#PackYourBabcock" but I understand that he has a brand to uphold. Oh and on top of that, he's really just driving home the point that absolutely nobody likes him. Not the players, not the front office, not the equipment managers, not the fans, not the custodians at Scotiabank Arena, not even the guy slinging the 50/50 raffle tickets.

What's great here is that Commie sums up Babcock's time in Toronto as nothing more than just a daily national TV gig. Not coaching the Leafs, not leading them to be anything better than an annual first round exit. Just a chance for Mike Babcock to promote himself on national tv for 4+ years. Also love the running theme here of "let that sink in you arrogant prick". Really ties the whole thread together and makes it feel like a professional roast.

If anybody deserved to pop a few bottles last night and get nice and loose, it was Commie. Aside from winning the Cup and maybe also winning an NCAA National Championship, that had to have been one of the most recklessly enjoyable #InOne sessions of his life.

I mean,,,,,SHEESH. We know that Commie isn't one to ever mince words but good lord. This was like digging Mike Babcock up from the dead only to kill him again. Terrible human being, average coach, everybody is thrilled that you got shit canned and especially the players who quit on you to make it happen as soon as possible. I'm starting to think that Commie isn't a huge fan of this Mike Babcock fella.