Heavy sigh. Here we go again. The White Walkers are back. And there's no choice but to draw swords on the Wall yet again.

Sometimes I, and I imagine half of New England, catch hell for the fact we still talk about things like Spygate and Deflategate. Like somehow justice was done by three Super Bowl wins in the last five years. But no. That's not the case. The damage done was permanent. In the form of lost draft picks that will never come back to be the next Logan Mankins or the next Devin McCourty or whomever. But also in the form of the lies that are still being told today.

Do you think I enjoy setting the record straight yet again? For probably the billionth time? Do you think it's my first choice to be reminding Mike Francesa that what he's spewing on the air about taping the Rams Super Bowl XXXVI walk through is absolute, USDA inspected, Grade A horseshit? Guess again. There's a world of stories out there just waiting to be mocked. Florida meth heads doing wacky things. Famous people making asses of themselves. Sexbot brothels. Celebrities looking attractive on Instagram. Paranormal activities. Female teachers boning their students. I only have the same number of hours in the day everyone else gets and I'd much rather be spending them on the stuff that sparks joy in me instead of re-fighting this battle I've been winning for 12 years now.

But I'm left with no choice. Lies that go unanswered get taken as truths if they're left unchecked. Perception becomes reality. And it falls to me to set the record straight. If not me, who? If not now, then when? So here goes.

There was no Rams walk through tape. It was mentioned in an article in the Boston Herald the day before the Super Bowl in February of 2008, as the Patriots were trying to go 19-0. It was written by Jon Tomase, who I used to sometimes work with at WEEI. We were not allowed to talk about it on the air. Tomase has admitted he got the report wrong. The Herald disavowed the story. And apologized. 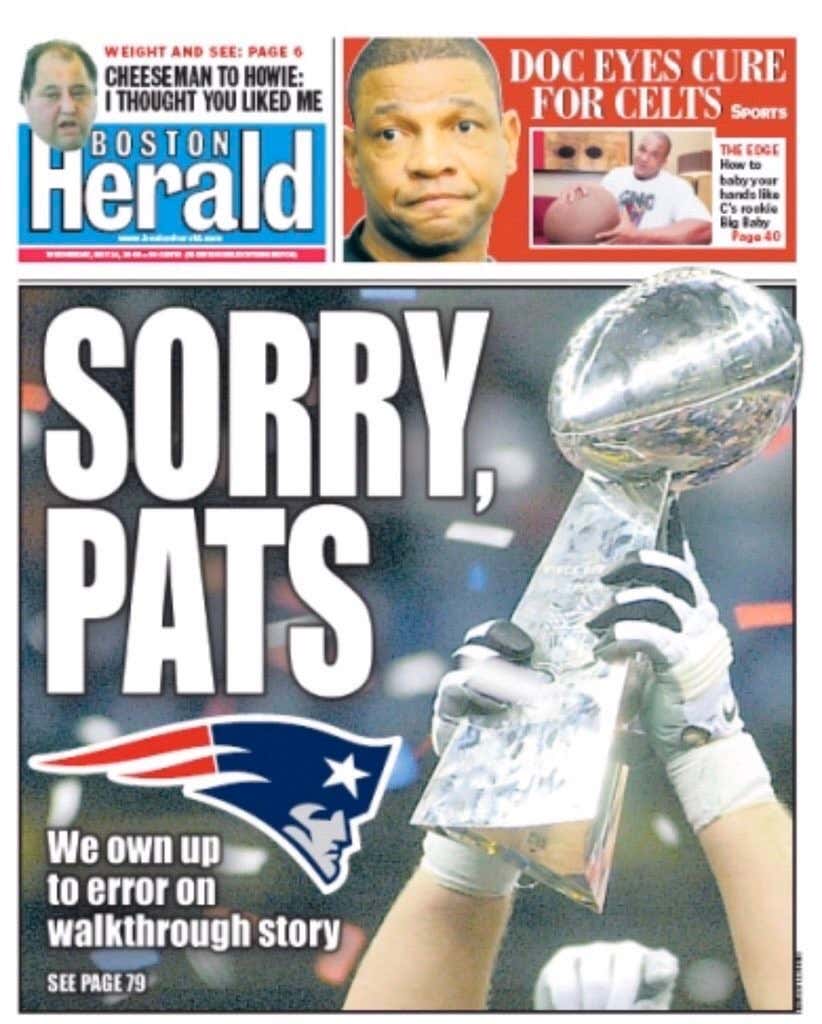 It never existed. It is a figment of someone's imagination. It is a fallacy. A falsehood. A lie. An untruth. It's invented. Made up. Fictional. Counter-factual. Spurious. Invalid. Erroneous. A flight of fancy. A deception. Mendacious. Unreal. Not a thing. Never in this reality did the New England Patriots, anyone associated with the New England Patriots or any other being in the universe possess a tape of the Rams Saturday practice, other than the Rams themselves.

The NFL said it. Roger Goodell, who is nobody's idea of a defender of his league's best franchise, said it. I talked to Jay Glazer once who has the actual tape on his phone and admits it's just of the Jets sidelines, with a lot of close ups of the cheerleaders. With no Rams walk through. Not one person has ever been able to produce this McGuffin because no such tangible object has ever been.

When the actual Spygate began, after the Week 1 game against the Jets back in 2007, Dave and I were both writing about it on the Barstool blog of the Bronze Age. My first reaction was that it was a weird story but no big deal and would blow over soon. I've never been wronger about anything in my life. Instead, the story has only gotten worse with time. And here I am, almost in 2020 and still being given no choice but to talk about it. Thanks to people like The Sports Pope repeating the lies. Probably in perpetuity.

So there you go. I've done my duty. Again. I'd like to think eventually this nonsense will stop. But I stopped believing that about 10 years ago. Now I just expect I'll be sitting here in 2030 still speaking my truth.  "I shall live and die at my post. I am the sword in the darkness. I am the watcher on the walls. I am the shield that guards the realms of men. I pledge my life and honor to the Night's Watch, for this night and all the nights to come."