Tournament Time: We're entering one of the best times of the year, the first time we have a bunch of daytime hoops. So that said, these blogs will be going up in the morning and I'll update if something changes (as news will come out closer to tip time, etc). I'll also update anything on my Twitter (@barstoolreags) and be talking about hoops there. Just know how close we are to Bill Walton high as hell in Maui. I'll talk a little bit about the major tournaments going on and some picks. 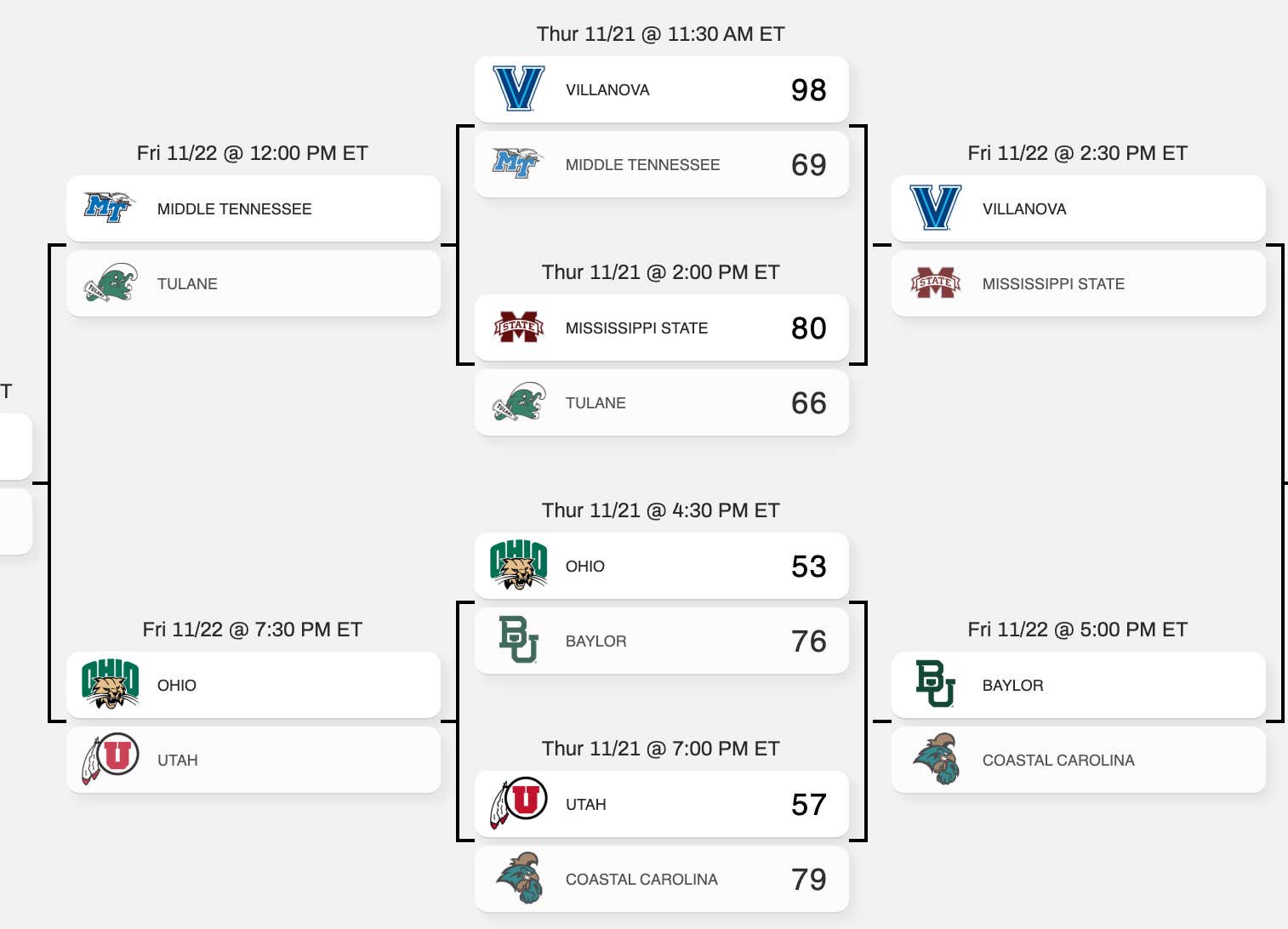 Thoughts: Call me crazy, but I think Collin Gillespie really likes Myrtle Beach, which checks out. Nova finally shot the shit out of the ball yesterday, something that they desperately needed to see after that Ohio State mess. Bryan Antoine also made his first appearance of the season and we're trending more and more to Baylor/Nova final. Biggest surprise was Utah losing by damn 22 to Coastal Carolina. Baylor continues to fly a bit under the radar nationally, which is perfect for Scott Drew. They are still trying to get Tristan Clark back to 100%, but they are just so damn balanced this year.

Part of what makes Nova good is Jeremiah Robinson-Earl. They want to surround him with shooters, let him attack in the post and then have the 4 out look. If you can take away JRE, like we saw Ohio State do, you can disrupt this version of Nova's offense. That's why I'm taking Mississippi State here. They have a guy in Reggie Perry that is NBA good and can play JRE 1 on 1 in the post. Also the fact that Mississippi State can shorten the game and are top-100 in both 3PA/FGA and 3pt% defense is huge. I don't LOVE this game, but for a little fun, Mississippi State is the pick.

Simply put, I like this Baylor team. I don't care that this is technically a road game playing at Coastal Carolina, Baylor's defense is too damn good in this game. Scott Drew will still run that amoeba zone type and when you have the versatility Baylor does this year it's just even better. I know CCU takes care of the ball and Baylor thrives on forcing turnovers, but we saw what they did to Ohio in a similar situation yesterday. They simply just out-athleted them when it was close and blew the game open. I like that this line is under 10 so I'm jumping on it. 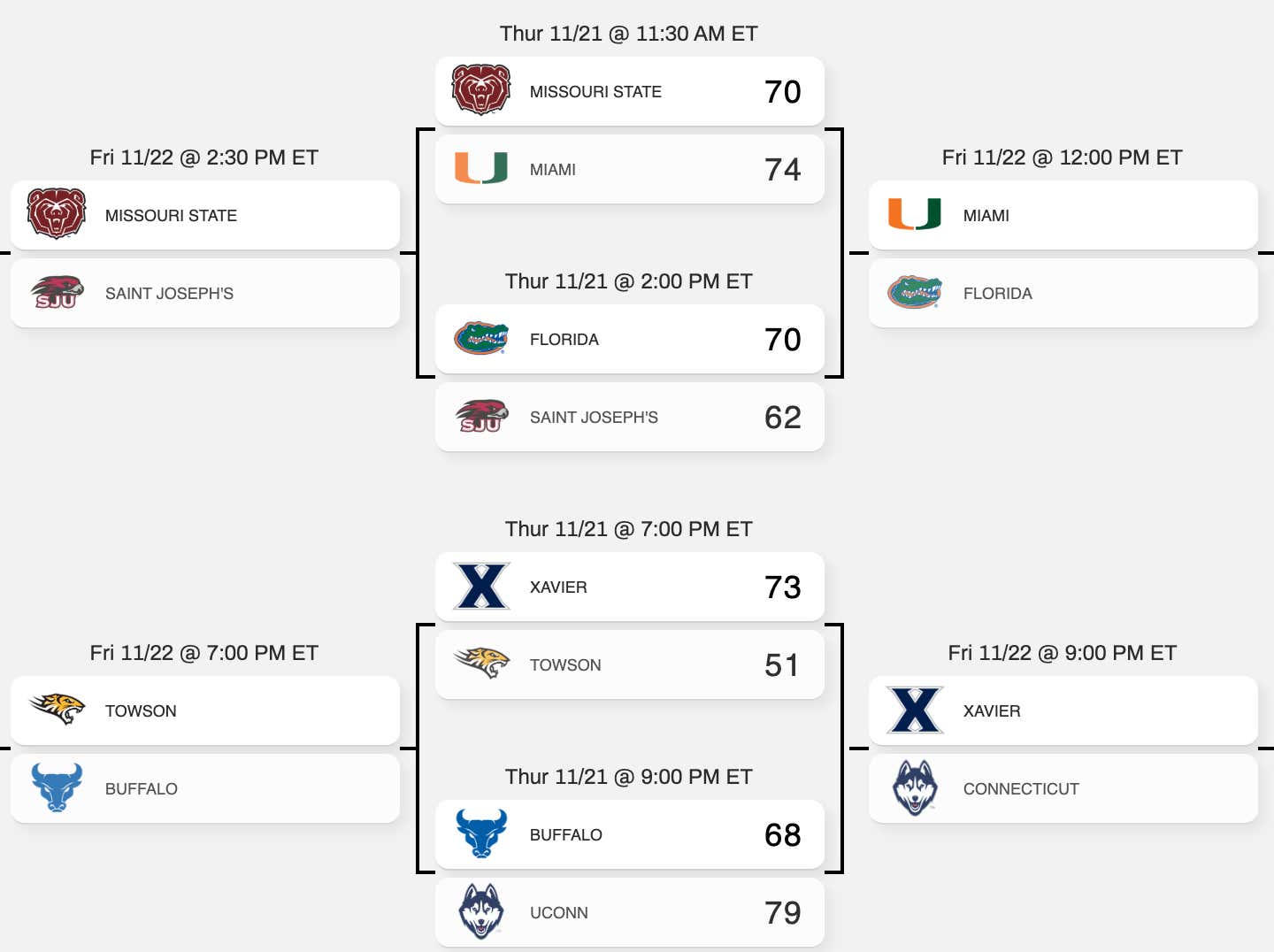 Thoughts: It went according to plan in round 1, but there are some real important games today. I want to see if UConn can keep the momentum. I talked about it before, but Danny Hurley has talked about this year needing to teach these kids how to win again. They have the win over Florida and can get another win over a ranked team within a week span. More importantly in this is Florida, the top-5 team that everyone is now down on. We'll talk about them here in a second.

Alright, let's talk about Florida. Finally, finally, Mike White read Twitter and listened to people. They finally started playing fast in yesterday's game. Then they slowed it down a bit and ultimately the moment Kerry Blackshear was ejected for tossing an elbow they went completely slow. But, it's there. Mike White knows the best thing for this team is to play fast - at least I think he knows that after yesterday. That's why I'm jumping all over the over here. Chris Lykes is going to look to get his and can get shots up against Florida's 1-3-1, but more importantly I just think you finally see Florida play the way they should.

Both teams kinda played weird games yesterday. Missouri State hung around with Miami, then fell down like 13, 14 points, before coming back again at the end of the game. St. Joe's was getting blown out by Florida and then Kerry Blackshear gets ejected and St. Joe's scores 37 points in the second half. That said, I just trust this Missouri State team more. I like Ryan Daly a lot for St. Joe's but Missouri State's defense is the best thing in this game. We'll trust that.

Just as a heads up this game is taking place in the Bahamas. That said, this line feels low. It's almost trap low, but I'm going to trap the trap (hopefully). Yeah, I don't love Steve Alford at Nevada and all that, but there's still talent. Jazz Johnson is a hell of a good player. Lindsey Drew is back playing. More importantly, I just think Fordham flat out stinks.

Grand Canyon. Don’t think they should be favored against anyone right now. Metrics have them in the 150’s, I’d be paying to eat my words as I don’t think they’re a top 200 team. Good enough for me to fade them and ride with Valpo as a dog.

My fear here is that Cincinnati overwhelms Illinois State with athleticism because that's typically what happens when high majors play mid majors. But, Illinois State might have the advantage in the backcourt. They have a transfer in Ricky Torres who was at Wichita State and honestly I trust him more than Milik Yarbrough, Illinois State's star guard prior to him. There's also the Jarron Cumberland situation. He was benched for Cincinnati's last game and it was a coaching decision. Will that carry over? I know Cincinnati is playing faster under John Brannen, but this is going to be a limited possession game.