Red Holzman earns his 500th win as coach of the New York Knicks, becoming just the second coach in NBA history to win 500 games with one team. Holzman’s milestone comes in front of the home fans at Madison Square Garden, as the Knicks beat the Houston Rockets in overtime 130-125. Red Holzman would end his career in 1982, posting a 613-483 record in 14 seasons with New York.

William Holzman was born on August 20, 1920, in Brooklyn, New York. Holzman grew up playing the city game and eventually played basketball at CCNY, then an NCAA powerhouse. After serving in the Navy, Red Holzman, a nickname he got from his red hair, began his playing career with the Rochester Royals in the NBL. Holzman spent eight seasons with the Royals as the NBL and BAA merged to become the NBA. Red Holzman played on the Rochester Royals’ 1951 Championship team, beating the Knicks in the NBA Finals.

In 1953 Red Holzman left the Royals to become player-coach on the Milwaukee Hawks. The Hawks moved to St. Louis two years later, with Holzman remaining the team’s coach until being fired early in the 1956/57 season. With the Hawks, Red Holzman had just limited success, posting a record of 83-120.

After he was fired by the St. Louis Hawks, Red Holzman served as a scout and assistant for the New York Knicks, a position he would hold for the next ten years. In 1967, Holzman got a second chance to be a head coach when he took over for Dick McGuire. As new Madison Square Garden opened, the Knicks became one of the top teams in the NBA under Red Holzman, winning the NBA Championship in 1970 and 1973.

Red Holzman’s Knicks teams were known for team play and strong defense, as they had a roster full of future Hall of Famers. In 1977, Red Holzman briefly left the Knicks’ bench but returned a year later after Reed was fired 14 games into the 1978/79 season. 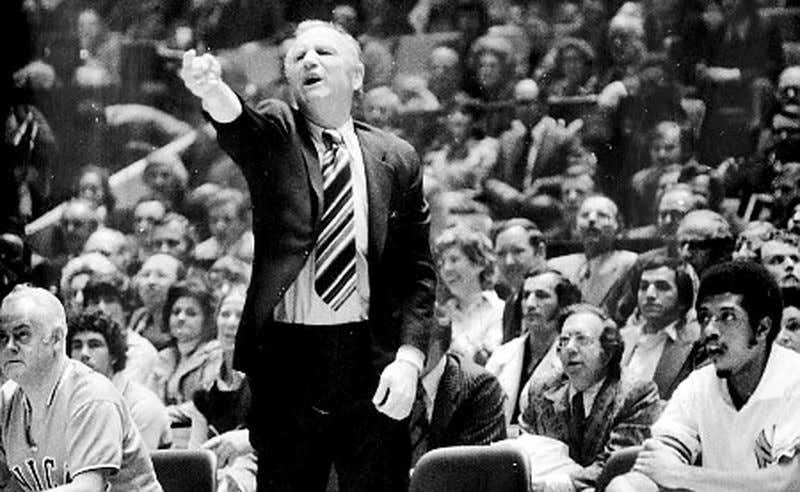 Red Holzman’s 500th win with the Knicks, followed his formula perfectly as New York had four players score 20 or more points in their 130-125 overtime win over the Houston Rockets. Ray Williams was the Knicks leading scorer with 25 points, while Bill Cartwright had 24, Toby Knight had 21, and Michael Ray Richardson had 20. Houston was led by Moses Malone, who had a game-high 32 points while Calvin Murphy added 30. At the time, only Red Auerbach of the Boston Celtics had more wins with one NBA team.

Red Holzman would retire from coaching after the 1981/82 season, winning 613 games as head coach of the Knicks, and posting an overall record of 696-603. He would be voted to the Hall of Fame in 1985 and named one of the NBA’s ten greatest coaches in the league’s 50th season in 1996.