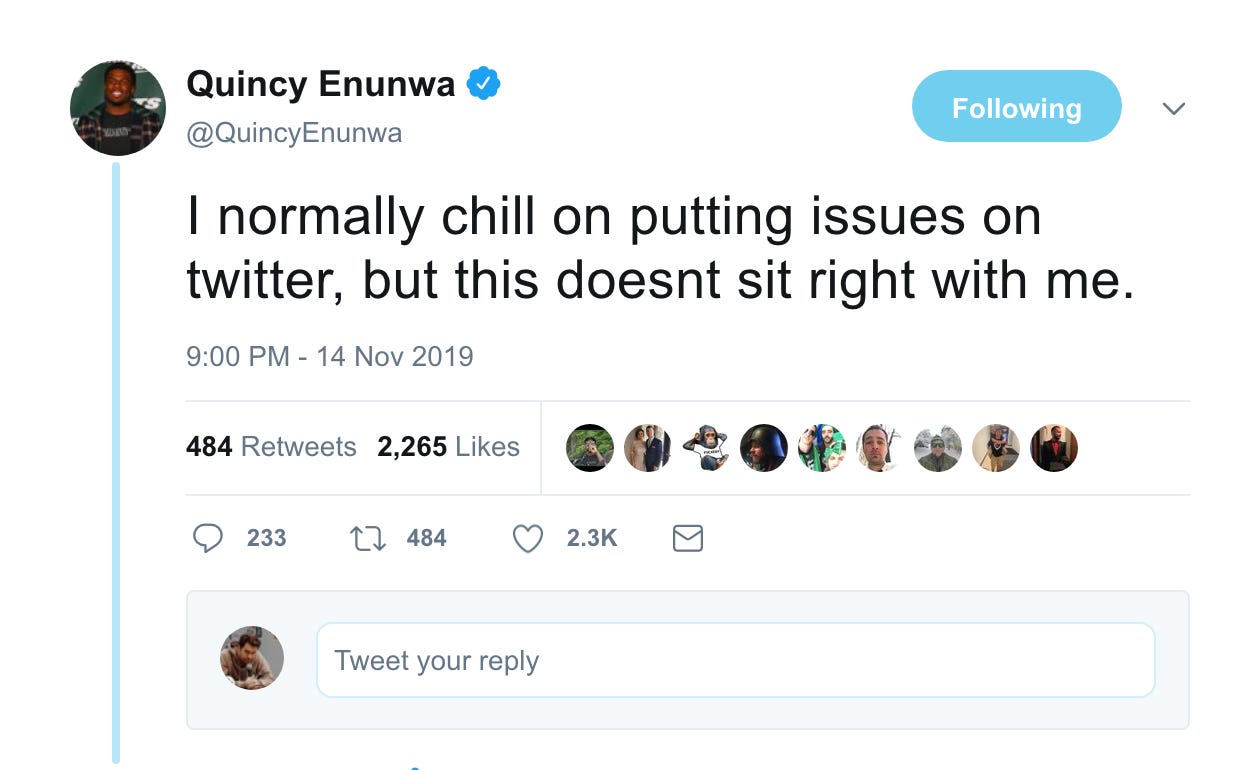 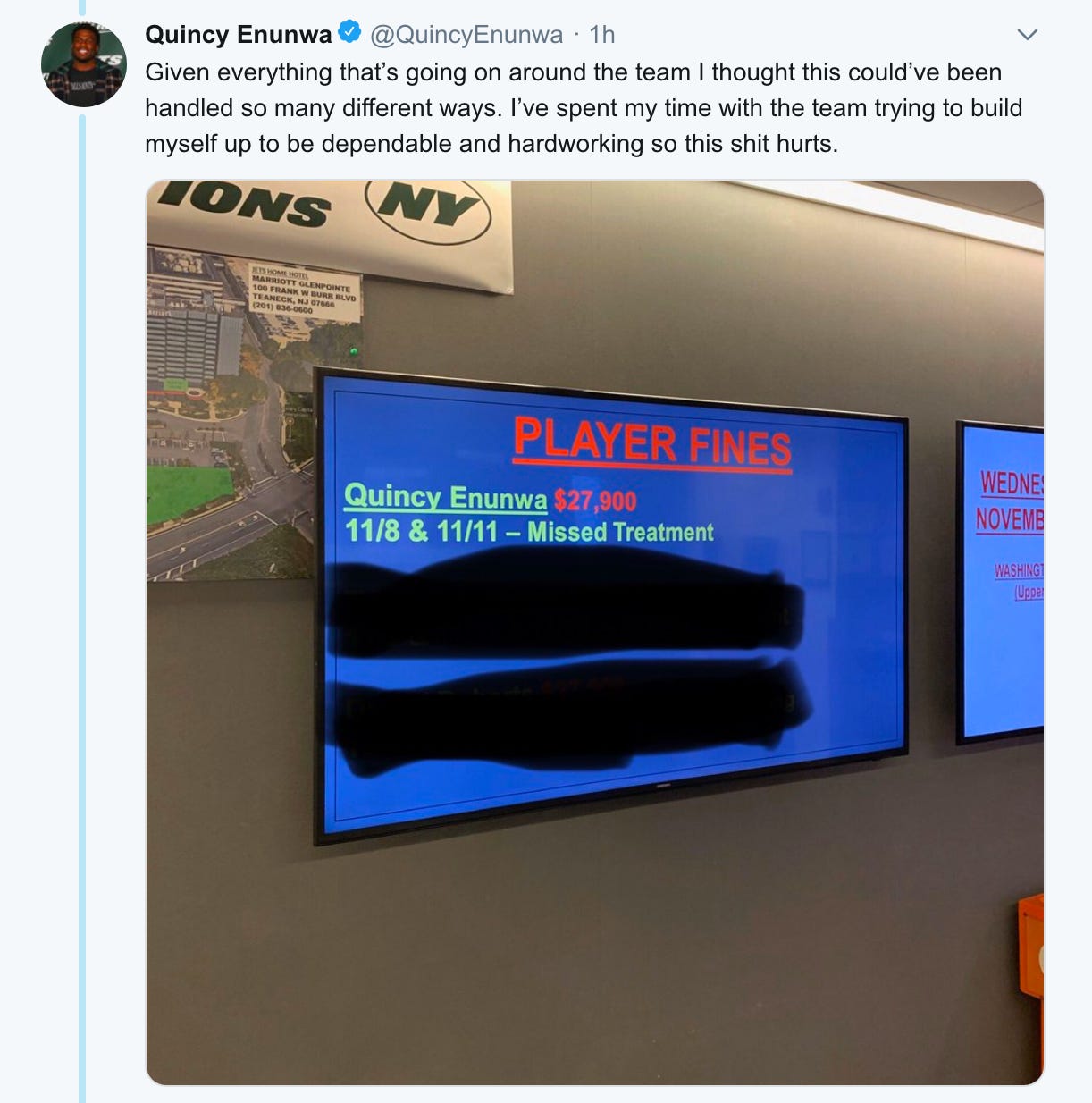 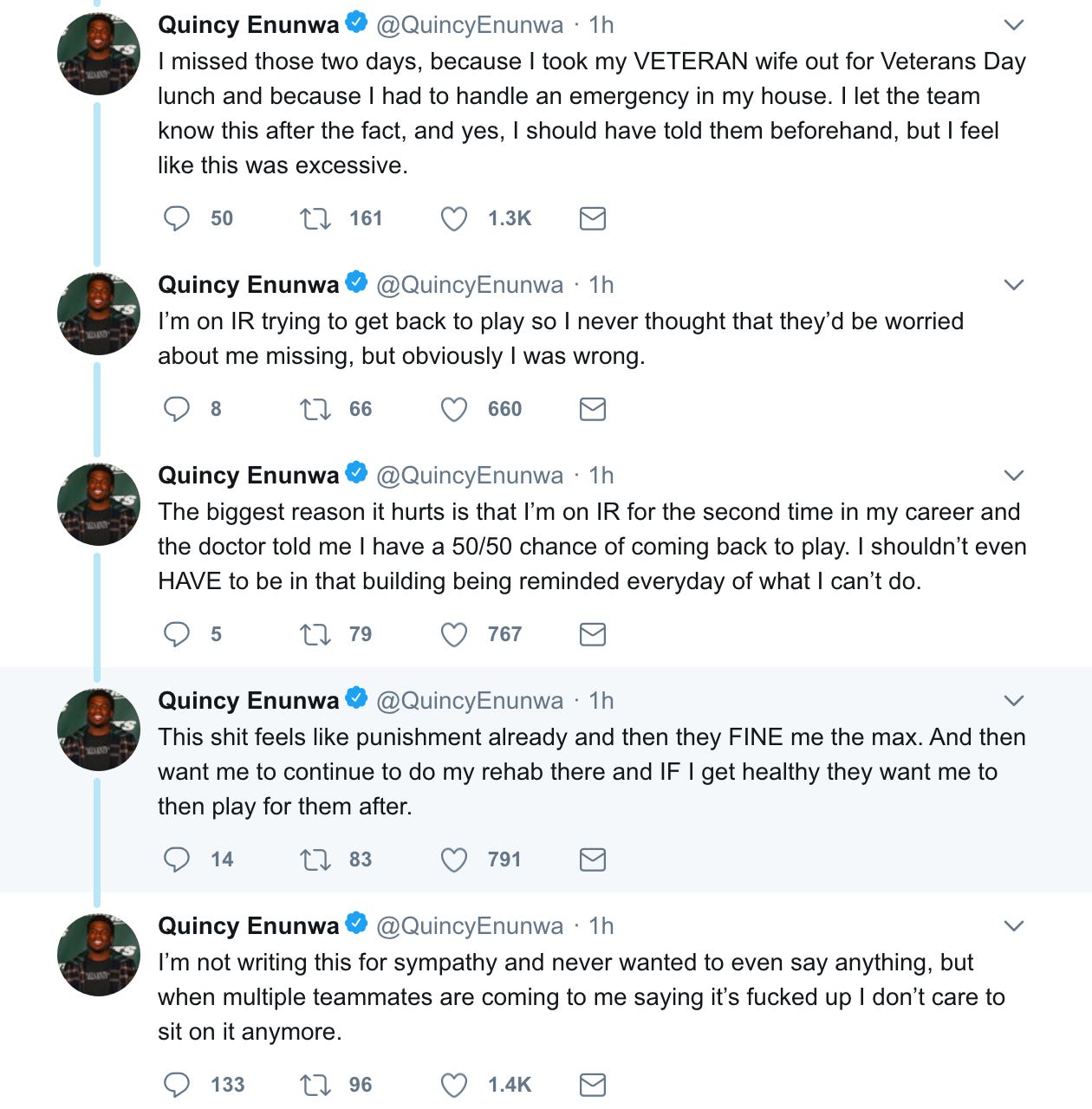 The Goddamn Jets. It just never fucking stops. Tonight was the latest in this never ending soap opera known as the New York Jets. Quincy Enunwa drops a twitter thread airing out the team for fining him $27,500 for missing an treatment on Monday. And once again, everyone looks like an asshole. That seems to be the running theme of the 2019 Jets. Everyone is a dickhead. You know when teams have those slogans for the season that they plaster on posters and programs and tickets and shit? Like when the Mets had "The New Mets" and "Your Season Has Come" in years that they fucking SUCKED? Well the 2019 Jets should be "Everyone's An Asshole"

It started with Kelechi Osemele. A guy who is kinda gaming the system and using an injury to the best of his advantage, but also a guy who VERY MUCH had a torn labrum and needed season ending surgery. The Jets didnt want to waste money on a guy who was about to be cut, but denied an injured player the right to get surgery. Everyone. Is. An Asshole.

Then there was Jamal Adams. He, too, takes to twitter. Says the team went behind his back and tried to trade him (Breaking News: that's something that happens in professional sports) after a meeting in which they said they'd keep him (Its a business, bro. Not your HS girlfriend you promise to be love forever). The team dances around the subject playing a game of semantics about the definition of "shopping" and who picked up the phone first and ruin their relationship with the best safety in football and a guy who could be a defensive cornerstone. Everyone is...any guesses? Anybody? Yes, thats right. An Asshole.

And then tonight. Quincy. Blatantly admitting he fucked up by missing his treatment, and starting off his twitter thread with "I normally dont do this but..." Good rule of thumb: whenever you start with "I usually dont do this," you probably should not do "this." Whether you're a slutty girl trying to not give it up on the first night because you know hes never gonna call you after you fuck, or if youre a pro athlete about to air out locker room business publicly. Usually a good idea to just not do it. Just like its not a good idea to fine one of your players nearly THIRY THOUSAND DOLLARS while hes on season ending IR. While hes on the sidelines with his 2nd major neck injury, staring down the barrel of maybe never playing again. You cant miss meetings, everyone knows that. Even the player in question admitted that. But $27,500 for a guy who has no shot of playing again this year for missing a treatment session seems very excessive and extremely petty. Everybody. Asshole.

Honestly if the Jets had just brought in some Hall of Fame coach and had a veteran general manager on the same page who decided they were going to clear house, cut out all the bullshit, change the Jets culture, and rule with an iron fist until they weed out all the nonsense and develop a franchise thats extremely disciplined, I could understand that. It feels heavy handed and impossible in 2019 with pro athletes, but maybe I could see their vision with that idea. Like its my way our the highway and if you got a problem or youre gonna complain or go public, then get the fuck out. But they dont have the right coach and GM combo for that. They have Adam Freaking Gase. The dude suckkssss. He does nothing but lose football games and piss players and fans off. I hope Joe Douglas is the type of guy who can instill his own program and run the show his way...but at the moment he seems handcuffed by a coach who he didnt even hire. A coach who has the owners vote of confidence through next season while not showing a single reason why. I dunno...just doesnt feel like the right coach or the right time to decide to rule with an iron fist and piss off your entire locker room. I dont like when the inmates run the asylum, but right now I feel like nobody at all is running the asylum. The inmates and the guards are all just fighting each other and the whole asylum is fucked. Nows not the time to try to punish everyone and ride everyone to the point that you now have a different culture problem. Its like robbing Peter to pay Paul. You cant fix the "We're a sloppy organization" problem when you go ahead and create a "all our players hate us" culture.

Watch KFC Radio every Tuesday and Thursday only on Barstool Gold. In addition to the video podcasts, you can watch the Barstool Documentary, all-new bonus episodes of KFC Radio Cutting Room Floor & KFC Radio Classic, as well as Skype Rundowns, live video AMAs, and other video content from some of your favorite personalities. As a Barstool Gold Hardcore member, you’ll also receive free shipping in our store, fewer ads, exclusive merch and the chance to take a tour of Barstool HQ. Join the most hardcore Stoolies and subscribe now: barstoolgold.com/kfc