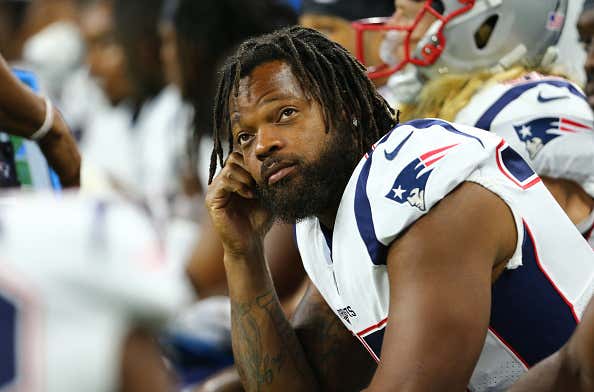 Well this explains a lot.

To those of us wondering what kept things from working out for Michael Bennett in New England and why he'd shoot his way out of town when he was on an undefeated team, led by the best defense in the league, and he was being paid full time wages for what was just a part time job, here's our answer.

It was more complicated than he bargained for.

I don't in any way take that as me trashing Bennett. Bill Belichick's complex, amorphous schemes aren't for everybody. Some guys are superior athletes who thrive in simpler defenses with fewer responsibilities, and Bennett (two games in Dallas with five tackles, one sack and SIX QB hits) is clearly one of them. There's no shame in that. Not everybody can figure out their role and responsibilities here. Some guys, say Kyle Van Noy or Jason McCourty, are able to come here and grasp it no time like they're the James Holzhauers of defense. Some like Dont'a Hightower, take a season or two. Then others need to be sent away on a Shakespearean Sea Change before they come back with a greater understanding. I'm looking at you, Pat Chung and Jamie Collins. But there'll always be those guys who'll never get it. Who play like a "Price is Right" contestant who suddenly finds himself standing at the "Jeopardy!" podium and Trebek is reading him a clue about "The Brothers Karamazov." You could give them forever and they'd never come up with the right answer.

Michael Bennett is a bright guy. But some players simply don't want to do all the studying it takes to excel in New England. There's a lot you have to know. When you play defensive end in New England, "Do Your Job" isn't just about rushing the passer or setting the edge or taking away flat away from a running back on a late release. It's all of the above. And so much more.

It's knowing what everyone else's job is as well. Patriots defenders are expected to mesh together as one. You're 11 individuals who link up to form one giant Voltron of offense-stopping power. And those pieces are meant to fit together in many different configurations, while maintaining effectiveness. We hear all the time that they are a "gameplan-specific team." Which is true. But that plan doesn't change from game-to-game or even drive-to-drive. It's built to morph from one play to the next, even if the down and distance hasn't changed. As one NFL defensive coordinator told NFL.com, "It takes a lot of work to get all of the nuances down but when you've been doing it as long as them, your guys get comfortable in the coverage and they eventually begin to thrive in it."

That guy was talking specifically about the way the Pats play more man coverage than any other team in the league, by far. But he could've been talking about any aspect of this defense on all three levels. The way they'll switch from a 4-man line to a 3-man line in any situation. How the 4-man line will employ odd spacing and the 3-man line will do even spacing. How they'll switch from an even "over" front (slid outside the tight end) to an "under" front (slid inside the tight end) at will. Hell, they've even been known to play one-gap on one side of the line of scrimmage and two-gap on the other in the same formation. Which is insane.

So I'm not disparaging Michael Bennett when I say he wanted no part of doing all that homework. As Salt 'n Pepa once put it, this dance ain't for everybody; only the sexy people.

The thing that gets me about this revelation from Bennett is that he's no rookie. He's not some nervous first timer in the back seat of a car, stymied by the intricacies of how to undo a bra clasp or tear open Trojan wrapper. He's been around. Playing in systems as diverse as Raheem Morris' in Tampa Bay, the Pete Carroll/Dan Quinn defense in Seattle and now Rod Marinelli's in Dallas. Hell, he's played for two branches off the Belichick Coaching Tree in Greg Schiano (also Tampa) and Jim Schwartz (Philadelphia). But never met a scheme he couldn't fit into until he came under the command of the Sith Lord himself.

Like I said, it explains a lot. Everything, in fact. I'm not even mad at Michael Bennett. On the contrary, I take it as a compliment. And if anything, it makes me appreciate the players we have and respect how well a rookie like Chase Winovich is doing even more. Best of luck in your new, simpler, less effective defense, Bennett. I wouldn't have this one any other way.