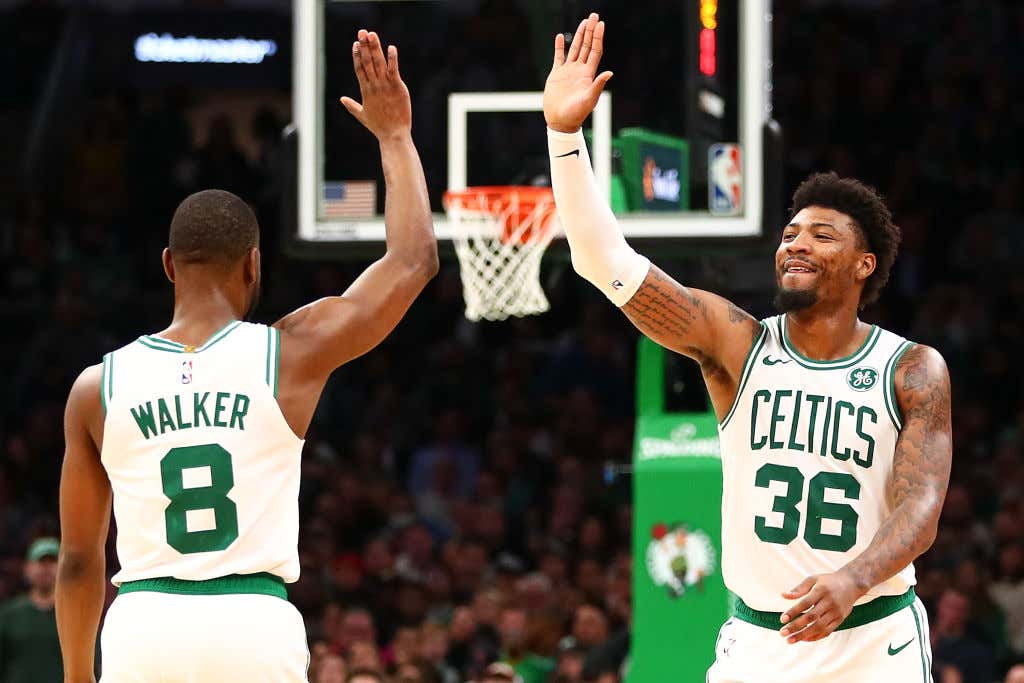 It was fair to question how the Celtics would look in their first game without Gordon Hayward facing a team that was 4-0 on the road. Not only that, but the Mavs were the highest scoring road team in the NBA and are led by two legit unicorn players that have gotten off to their own awesome start this season. The answer? Just as dominant as they've been all season long. An NBA's best 8-1 record, their 8th in a row that is also the longest active winning streak in the league, it's hard to deny what we are seeing from the Boston Celtics through the first 9 games. Utter and complete dominance. Oh, and for those who want to keep playing the "they haven't played anybody" card, the Celts have had the 8th hardest schedule to date and the second best RPI (25% winning percentage, 50% opponents winning percentage, 25% opponents' opponents' winning percentage). Whoops! There goes that argument for the haters and losers. Pray for them during this trying time.

In all seriousness, it's hard to imagine a better start to the season and honestly despite it being SUPER EARLY still and nothing we're seeing now really meaning anything come April, I'm not going to let that rain on your parade. What we are seeing from this group is wire to wire dominant basketball on both end of the floor. Everything about them looks and feels different from what we witnessed last season and that couldn't be more refreshing. This team cares, they love and trust each other, and it's no surprise that is directly translating to success on the basketball floor. They essentially won this game not just without Hayward, but basically without Jayson Tatum as well and you know what maybe you should read the rest of this blog in private because I cannot be responsible for any arousal you may experience as we move forward. You've been warned, so let's dive in.

- The second Kemba Walker shook off his nerves about joining a new team, he's been one of the best point guards in the entire NBA. His scoring is every bit as legit as I think we all hoped it would be, even if it's primarily coming in the second half of games. That's fine by me, I'll take 10 fourth quarter points on 3-4 shooting including 3-3 from deep, all of which were much needed in order to pull this game out.

Here's what I will say about Kemba. I am at the point now where I am legit shocked when he misses, especially late in games. That's only happened two other times for me in recent years. The first was Ray Allen, my brain just did not think he was capable of missing when that beautiful jumper was unleashed. The next was 2016 Isaiah and his historic offensive season. Somehow someway he would fuck up and actually hit the rim on a shot he made. Then came Kyrie Irving. Yes he was a dickhead and we all hate him, but let's not pretend he wasn't an offensive wizard. When he got cooking it was awesome to watch. The same is happening with Kemba. You'll take 53/57% splits right? His 8 3PM put him on a very short list of Celtics

and his +29.9 net rating last night still has me dizzy. When this team has needed him most in their biggest spots, Kemba has delivered. If that's not ideal then I don't know what is.

- You know what else is ideal? The continued development of Jaylen Brown. I mean we're at the point now where we can declare his leap for real right? This isn't a situation where you're getting one good game and then he's disappearing for the next three. This is every. single. night.

Everything about his approach is all we could ever want from Jaylen. He's attacking the rim and continues to finish at a high clip, he's making reads that he wasn't making last season, and his mentality is PERFECT for this group

There's one main factor to his success that cannot be overstated. It's his improved handle. That has changed everything and was a major weakness that up until now was limiting his potential. His handle is so much better it's not even funny, and more importantly he's confident with it. Now that he can actually dribble the rest of his game opens up and look what happens. He comes a legit All Star talent. You may laugh at that but he's up to 19.8/7.2/2.2 on 53% shooting. If that isn't in the conversation for an All Star nod if he maintains this all year then why even have All Stars?

Oh and how about his improved passing? Dare I say his extension was a steal? Everything coming up Ainge once again!

- What do I always say, shit comes down to defense and rebounding. Well, the Celtics held their own on the glass finishing 46-46 and defensively they held DAL to just 41/26% splits. They more then held their own in terms of point in the paint matching them the whole way 48-48 and the work they did on Porzingis was flawless.

- We need to take a second and talk about Marcus Smart. Offensively, the man is a respectable shooter and the rest of the league is going to have to deal with it. People that call him an offensive zero are exposing themselves as someone who does not watch Marcus Smart play basketball. I'm not just talking about the shooting though, the passing and impact he makes as a playmaker is undeniable

but the reason myself and many Celtics fans out there would take a bullet for this man is because of what he brings defensively. Pozingis? Yeah Smart held him scoreless. Luka? He dominated with 34 so how good could Smart have been? Well he guarded him on 25 possessions and held Luka to 4 points. Is that good? That seems good.

The fact that we got some Smart Fuck You Threes to seal it was the perfect ending, but this is a man that has shut down almost every #1 option he's had to face to start the year. If this isn't a DPOY worthy start to a season then I don't know what is. He's the captain, he's the emotional leader, and it's been awesome to watch him develop as a lethal all around player.

- Daniel Theis might not be a world beater, but the man continues to be nothing but solid in his opportunity. Another 11/5/3 from him with a block and 4-4 from the field. Combine that with his team best 97 Drtg and team best +61.4 net rating and Theis has been one of the biggest surprises of the entire roster. The fact that he is holding his own defensively is a gigantic bonus

- All of these are 100% fact. That means there is no hyperbole added, no bias, no homerism, none of it. Drink it in because it's real and it is spectacular. The Celtics have

The best record in the NBA

The longest winning streak in the NBA

The best point differential in the NBA

The best net rating in the NBA

The 2nd best offense in the NBA

The 8th best defense in the NBA

This confuses me though, because I was told none of this would happen. I was told the Celtics would be a disaster defensively and they didn't have the talent to be an elite team in the East. What happened? It's cool though, everyone please keep sleeping while we enjoy life atop the NBA world.

- How about Javonte Green actually showing some life? Not a bad 9 points on 4-8 shooting in his 13 minutes. He was obviously a candidate to help fill Hayward's role and honestly it could have been better if he got a friendlier roll on some bunnies. I love his motor and his energy and think he can really help in limited minutes.

- Same with Wanamaker. The dude is just steady

- The Celts didn't poop themselves in a second quarter and actually came out of halftime with great energy. Who are these guys!

- I mean we can't go on without talking about what was the worst offensive performance of Jayson Tatum's career. You go 1-18 and become only the 3rd person in decades to be that bad I almost respect it. I suppose if you're going to stink, at least get historic with it and make it cool. Getting your name in the history books is always fun, but holy christ was he bad. It was a mix of everything, missed layups, missed threes, forced long jumpers, you name it and Tatum did it. Unless what you named is make shots because woof. My guess is we won't see a performance like that in his Celtics career, and sometimes guys just have nights like that. Not often, seeing as how it was only the third time in history, but you get the idea.

At least he got it out of his system in a win, so my homer brain is ready to forget it ever happened. Last time I checked he's still averaging 19.4/7.7/2.3 which is more than acceptable. His shooting splits are hot garbage, but he's still busting his ass defensively and has shown growth as a passer. Horrific shooting night, something that cannot become a habit, but my guess is it'll be a different story from here on out.

- Maybe don't give me a fucking heart attack and miss so many fourth quarter FTs. For a team that seemed to figure out their FT issues after the opener, I did not appreciate that shit last night in a close game.

- Romeo was the only Celt to get a DNP-CD which was unfortunate. I'm ready to see what he's got now that Hayward is out.

- Nope, keep it moving. In fact we might be giving up this section for the rest of the season because I'm pretty sure the Celtics might never ever lose again.

Tell me it's early, tell me this isn't sustainable, I don't give a shit. If this was your favorite NBA team dominating like this to start a year you'd be over the moon too. It's possible to be excited while fully understanding there is a ton of basketball left to be played and there are weaknesses that this team will have to tighten up to be a legit contender when it matters most. But for now? The Celtics are the best team in the NBA and haven't looked this good since the Big 3 era. Deal with it.