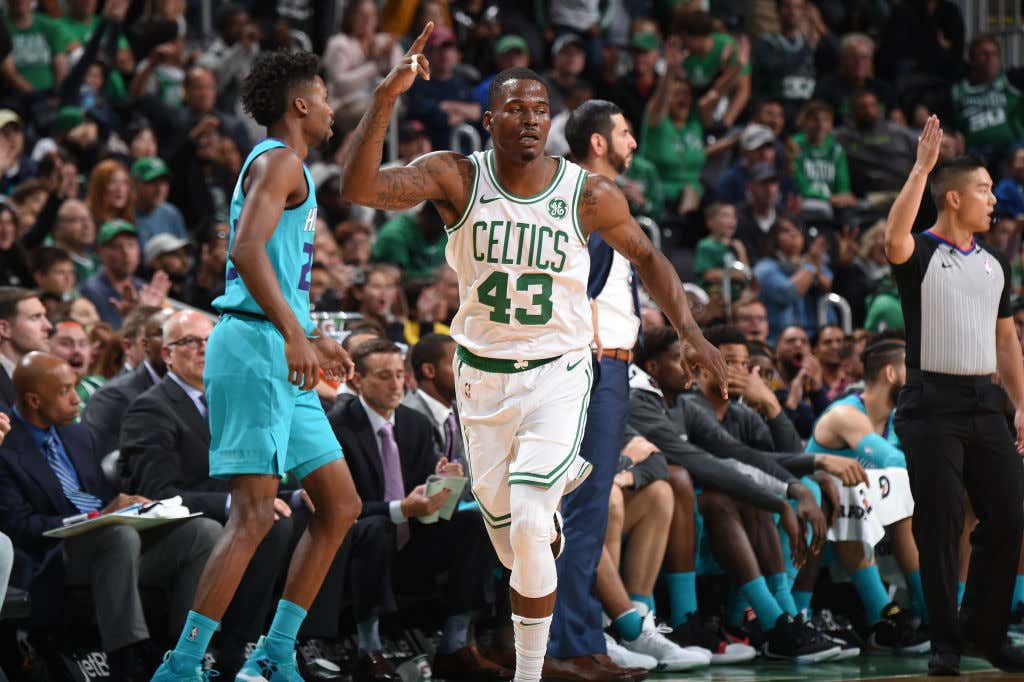 While we all wait to hear what the hand specialist says about Gordon Hayward and his fractured left hand, all we can do now is speculate

both in terms of his potential recovery timeline and how on earth the Celtics are going to go about replacing a player who has been their best and most consistent producer since the season started. You can be of the mind that the Celts will be OK for however long Hayward is out because of their talent and their system and you may be right, but I wanted to take a closer look at how the hell Brad might actually handle this situation. This is the first big piece of adversity this team is facing, and honestly we have no idea how the players or the coach will respond. Will Brad pick the right rotations? Will players like Tatum or Kemba try and force things offensively to make up for Hayward's lost production? There are a lot of unknowns that will ultimately determine what this team looks like over the next handful of weeks.

First though, a reminder of what they are going to be without.

As you can see, this is not the same as replacing 2018-19 Hayward. This is an entirely different animal. Hayward was 3rd on this team in usage to start the year, meaning he was an integral part of what they did in all facets of the game.  Now challenged with replacing this sort of production, Brad Stevens has some options.

This of course is the first thing people will talk about. With Hayward down this now opens up an opportunity for Javonte Green to play some extended minutes, and we got a little taste of that in the second half this weekend when Green played 13 minutes and went 3-5 from the floor. If you haven't seen much of Javonte Green play, this dude is an athletic freak who has some of the hardest in game dunks we may have ever seen from a Celtic. Harder than Gerald if you can believe it

Taking Hayward's place when he would fill in with the second unit, the Celts will need Green to emulate Hayward's approach in terms of his drives. This was the biggest part of Hayward's resurgence and it also happens to be something Green can do with ease. They won't be able to just give Green the ball and allow him to create like they do with Hayward, but having him as a cutter off ball could be a strategy, also using him in P&R where you can just lob it up to him isn't half bad either.

As you may have seen, the Celts called up Romeo from Maine and if you saw his debut performance the other day that should excite you

I don't think Brad will throw him to the fire right away, he's still going to have a limited role and might only play sparingly unless someone gets in foul trouble but he is another intriguing guard/wing with good size who I think we're all dying to see play at this level. We basically haven't seen anything from Romeo due to injury so far, and who knows maybe adding a lottery pick into the mix won't be so bad

Of course this is based on a pretty small sample, but it's the best we can do at this point. If you look at the 5 man combination that has played the most minutes together without Hayward included it's this five:

That lineup has a +39 net rating in the extremely small sample size of 13 minutes, but as we know that's mostly a bench unit. That doesn't solve the starting lineup issue/the lineup this team will use a majority of the time. So where else can they look? Well, the combination of

has a 138 Ortg and a net rating of +8.1. Given what we saw from Rob this weekend it wouldn't shock me if we see that get some burn. Of course the

Kemba/Smart/Jaylen/Theis lineup is probably what we'll see Brad try first, but I'm not sure that's their best option. Granted the sample size is very small but the early returns on that combination aren't great

If it's me, I maybe take this opportunity to explore what it might look like if the Celts go more conventional and actually go big. Maybe a starting lineup of

Kemba/Jaylen/Tatum/Theis/Williams (or Kanter if he's ready)

I know Brad usually relies on Smart to fill in when injuries to the starting 5 happen, but this would put Theis at his more comfortable position and allow there to be some help for Timelord defensively if he fucks up his rotations.

To those who don't watch Marcus Smart play on a consistent basis, they think he's mostly a negative offensively. This couldn't be further from the truth. Not only is he now a respectable outside shooter, he's also one of this team's best creators, especially in the P&R.

Did you know Smart leads the team and all ball handlers with 1.53 points per possesion in P&R? With an AST% of 20.4 on the season, if you're going to have more lineups and minutes with Robert Williams on the floor, then I want more Smart/Timelord P&R. He can throw the lob with the best of him, but with how he's trimmed down his turnovers I think that's the key to this second unit. It'll be hard to replace Hayward's playmaking, but I think Smart has shown he can do his part to pick up the slack when his role changes to a playmaker.

So far Jaylen has a career high usage at 23.5% and the early returns have been fantastic. He's aggressive, he's finishing at the rim and he's not only getting to the line but he's making his FTs. I feel comfortable knowing that we won't get the same type of Jaylen that settled for bad jumpers and forced things offensively. He's shown me enough that I want him to be an even bigger part of the offense. Just look at what he did in SA. You can't tell me that approach can't be duplicated.

Don't you dare force isolation basketball down my throat

For the love of God, do not turn into an isolation team. Why? Because your best players stink at it. Kemba is shooting 35% in isolation, Tatum 35%, and if this stretch has taught us anything it's that this team is at it's best when the ball moves. The easiest way to kill all that momentum is you lose a playmaker and then fall into your bad isolation habits. Smart can help you facilitate, if we see this team change course and overly rely on isolation with guys who feel they need to force things in order to make up for Hayward's production this team is fucked. Please please please do not do this.

There is no way to spin that losing Hayward isn't a big deal, but it's not a death sentence. This team does have the talent to at least make up for like 70% of what Hayward gave you, and considering this team looks like it's back to the group that always seemed to rise up to the challenge of guys being out, I'm feeling confident. Today's test will be great considering the Mavs are beating everyone it seems, and I think we'll learn a lot about this team with how they handle this speed bump. It's never ideal when a team loses it's best player but the good teams figure out a way to keep winning. The Celts are hardly the only team in the NBA that has been asked to win without key rotation players, and if we all think this team is good then there should be no excuses. They have the talent to keep the good times rolling, now we just have to see them prove it.