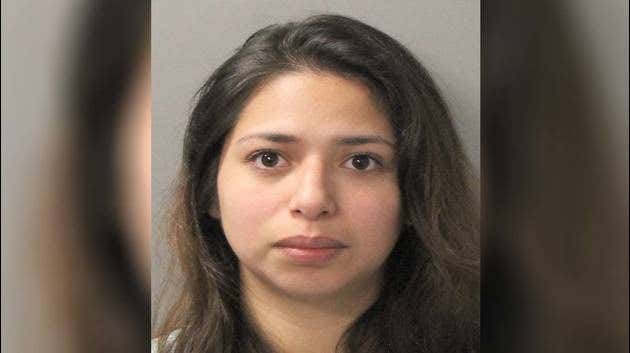 Texas – A 23-year-old substitute teacher at Pasadena Independent School District is facing charges after being accused of having sex with a 16-year-old male student in 2018.

Olivia Huerta substituted for a social science teacher at Sam Rayburn High School at some point between January and April of 2018, officials wrote in documents filed in court. During that time, police say she took a 16-year-old student to her parents’ house and had sex with him.

The allegations came to light when police say the teen admitted to a friend that he had sex with a teacher. The friend reported this to school administration, who then called authorities.

When interviewed, the victim told police when he was 16 years old, he walked with the teacher to her parents’ house and had sex with her. He also said they exchanged phone numbers and had conversations through text and Snapchat. He couldn’t remember the teacher’s name, but he described her as a short, curvy Hispanic woman. When police showed him an array of photos, he picked Huerta out of the lineup.

Police questioned Huerta and say she admitted to having sex with the victim. She gave investigators her phone, and they found a textual conversation between her and the victim on her phone, alluding to the inappropriate relationship, police say.

Thank you, Texas. your country needed this.

It seemed as though lately, the time honored American tradition known as the Teacher Sex Scandal had taken a dark turn. Sort of the way the ’60s era of peace and love was swept away in  the Rolling Stones show at Altamont. We had a Massachusetts woman falsely accused. A report of a high school kid who was supposedly so traumatized by his teacher boning him in an empty classroom he couldn’t finish school. And the senseless, terrible tragedy the other day. But for those of us who appreciate the good, wholesome, pure positivity of a good SST story, free from lies, sadness and violence, fortunately there’s always the Lone Star State. We might as well start calling it the Sex Scandal Teacher Star State. Making these lusty, D-hungry educators great again.

The Grades:
Looks: In the words of one of the anonymous Stoolies who sent this to me, “Not really a looker but not a horror show either.” Agreed. Although I probably like Olivia Huerta more than he does. There’s nothing about the descriptor “short, curvy Hispanic woman” that doesn’t earn you credit points in my book.
Grade: B-

Moral Compass/Bad Judgment: This is just what the SST doctor ordered. It’s almost like something out of a YA romance novel. The meeting in a classroom. Those first sparks of attraction. Exchanging numbers. The walk to her parents house. I mean, how many high school kids walk home from school any more? And even fewer teachers do. It’s not only good exercise, it’s a chance to bring back the lost art of conversation. It’s real face time. Instead of, you know, FaceTime. Some much needed one-on-one company to get to really know each other. Everything except each other’s name before having sex, but still. Details, details. The romantic follow up texts afterwards. Extra points to Olivia for admitting she did it. Though, after all, what are they going to do? She’s a sub. Are they going to take away her job of getting tortured by high school for 75 bucks a day? Go right ahead. And let’s not forget to acknowledge the friend, who was confided in and ran right to narc on Olivia and her house guest. With friends like this kid has, who needs enemies.
Grade: A

Intangibles: “Huerta”. Noun. “From the Latin hortus,
‘garden’, is a fertile area where a variety of common vegetables and fruit trees are cultivated.” Let’s hope not too fertile.
Grade: B

Overall: B+. Thanks especially to Olivia Huerta for giving us something to believe in again.