Today’s episode of Pardon My Take is absolutely loaded, consisting a TRIFECTA of guests. Football guru Warren Sharp and radio personality Matt Jones each joined the show, but right now we are going to zone in on the man himself, Coach Herm Edwards. During his chat with Mr. Cat and Mr. Commenter, the trio discussed some of his “Hermisms” and going back and forth between coaching and TV gigs, in addition to his marquee catchphrase “You play to win the game.”

Another portion of their conversation included recruiting. The do’s and dont’s, how to win a young man over, etc. Below is an excerpt about the etiquette on how to approach living room visits:

Mr. Commenter: You do seem like a world champion recruiter, like somebody that would come into the living room and kind of command, you command attention when you’re when you’re speaking with people. When you’re out on the recruiting trail, who is the most important person to recruit on a visit? Is it the player? Is it the mom? Is it the dad? Is it grandma? Is it the little brother? Who is it?

Coach Herm Edwards: It’s mom and grandma. There’s no doubt about that now. I mean, it’s always mom and grandma because that’s their baby. You know, they’re about to allow him to leave home. And who’s going to watch over him now? He becomes, you know, a little bit of your family when he comes to the university and they want to know the man in charge. Is he going to make sure that he’s in good hands? And then that’s critical. And it should be, because that’s a big decision for a young college, high school kid going to college regardless of where he goes. Who will influence him for the next 4-5 years?

Mr. Cat: Now, when you do go into the living room, are you a shoes on, shoes off guy? How does that work?

Coach Herm Edwards: According to the home, I always ask. I wipe my shoes off and say, shoes on, shoes off? And they’ll tell me. I always have clean socks on, by the way. 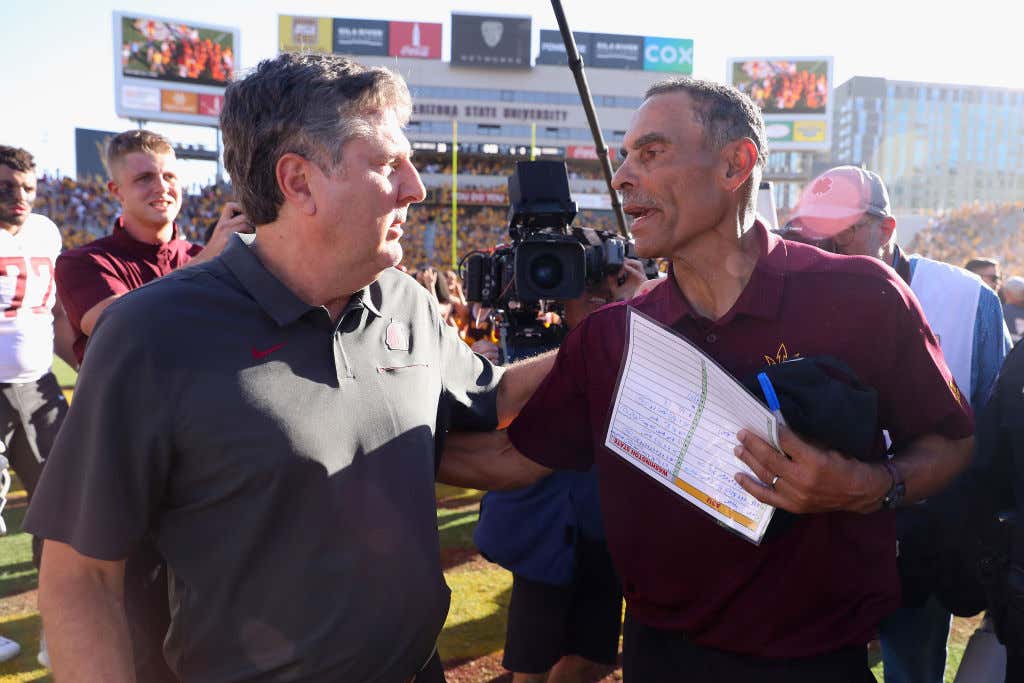 Mr. Cat: OK. Now, if you know that you might be taking your shoes off, have you thought about maybe doing like a little pitch on the socks? So, maybe like a message to the player or like maybe a play that’s like, say you’re recruiting this big wide receiver and you’re like, hey, look, here’s our goal line package, you’re featured, and it’s written on my socks.

Coach Herm Edwards: That’s a good one, I thought about it. The only way you can do that, though, is to have white socks, right?

Mr. Commenter: Or just a picture of the player’s face. How many pairs of socks do you own?

Coach Herm Edwards: I don’t wear socks with faces on them. Faces or animals, I don’t wear those types of socks. That’s not me.

Mr. Commenter: They can get stretched out a little bit and sometimes if you’re trying to impress somebody it’s like, hey, my face doesn’t look like that.

There are definitely some solid recommendations here from both Mr. Cat and. Mr. Commenter. Whenever I think of living room recruiting visits, that scene from “The Blind Side” will always come to mind. Michael Oher’s little brother trying to scheme his way to getting gear and/or running out with the team is always good for a chuckle.

Watch PMT every Monday, Wednesday, and Friday only on Barstool Gold. In addition to these video podcasts, you can watch the Barstool Documentary, all-new bonus episodes of Pardon My Take, KFC Radio & KFC Radio Classic, as well as Skype Rundowns, live video AMAs, and other video content from some of your favorite personalities. As a Barstool Gold Hardcore member, you’ll also receive free shipping in our store, fewer ads, exclusive merch and the chance to take a tour of Barstool HQ. Join the most hardcore Stoolies and subscribe now: barstoolgold.com/pmt