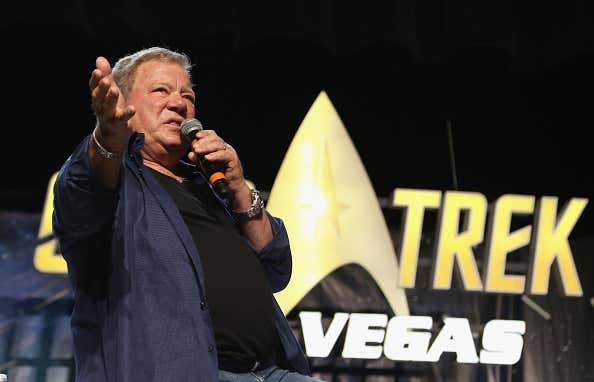 Source - Star Trek actor William Shatner waded into a generational row last night as he took aim at the catchphrase 'OK Boomer' and feuded with a Twitter user who had blamed older people for millennial 'hardships'.   ...

One Twitter user aimed it at Shatner yesterday but the Hollywood veteran, who was born in 1931, fired back: 'Sweetheart, that's a compliment for me.'

Warming to his theme, Shatner said he would 'wear that badge with honor' and embarked on a heated row with a millennial user, eventually calling her 'divaesque'.

Take THAT, Millennials! You come at the Captain, you best not miss. You do NOT want William Shatner's Twitter thumbs. In real life he's Kirk, TJ Hooker and Denny Crane all rolled into one incredible Alpha who's not about to take your bullshit lying down. It's a battle you cannot win.

By way of full disclosure, Shatner might be my all time favorite celebrity. It's a list I've never actually made but for sure, he's in the Top 5. First of all, he was in "Twilight Zone" episodes as far back as the early '60s, like the all time classic "Nightmare at 20,000 Feet." And almost 60 years later, he's playing to SRO crowds at convention halls around the world. No one has ever sustained a career with the ability and willingness to parody himself like Shatner has. Not only does he not shy away from his epic version of "Rocket Man," still one of the greatest clips on the internet:

…He's embraced the "spoken language" singing genre he practically invented with recent CD's "Has Been" and "Seeking Major Tom." Which a buddy of mine got as a semi-joke gift, but told me how genuinely good they are and I got my own copies. And my friend was 100% right. I'm not kidding when I say I listen to William Shatner music unironically.

In short, if I could interview any entertainer alive today, Shatner would be my first choice and it's not even close. I'd call him a National Treasure, but that's damning the man with faint praise. He's an Interstellar Treasure. He has been for six decades. And he's still kicking cyber ass at the age of 88.

So don't try your "OK Boomer" garbage on William Shatner. Or me. Or you will not live long or prosper. Resistance is Futile.