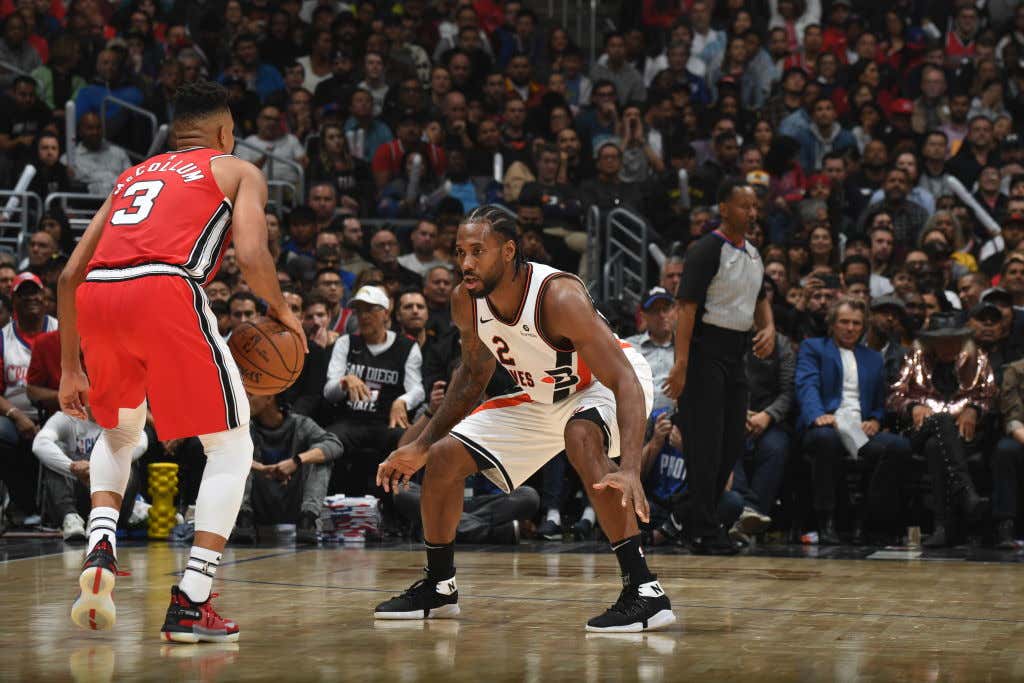 Good morning everybody happy Friday and welcome to another edition of Last Night In The NBA where we bring you up to speed on everything that went down from the night before in the Association. It was a relatively light night on the schedule with just 4 games, and frankly it was another night of mostly blowouts but that's OK because it's Friday and I know you don't want to do shit this morning so why not spend some time watching basketball highlights? A fantastic idea I know, so if you were maybe watching TNF or something and missed the action here's what happened.

While OKC vs SA may not be what it used to, this was still a pretty good battle between two teams that could very well be competing for those elusive lower playoff seeds. The Spurs are always there because they simply won't die no matter what their roster looks like, and the Thunder while rebuilding, are still loaded with intriguing young talent and all star quality veterans. Now the one thing they can't do is win on the road, 0-3 so far this season and it's a little weird to see an OKC team give up this many points in regulation since they are usually one of the top defenses in the entire NBA.

What we got though was an efficient, engaged performance from CP3

and maybe it's just me but it feels like we haven't heard much about Paul since the season started. He's had a weird season in that his scoring has been fine, 16 a game on 45/45% splits, but he's averaging a career low in assists at just 4.8. That's weird.

What isn't weird though is the play of Gallo, who was awesome in LAC and continues to be awesome in OKC

if he can continue to stay healthy nights like this are pretty regular for Gallo and it makes you think if they ever decide to just trade Paul and really blow it up if Gallo's market could also fetch them something nice as well.

Because make no mistake SGA is a future star

The Thunder were in this came until the third where things kind of got away from them with a 36 point quarter by SA, and there's no shame in losing to a team that is 4-1 at home. I think OKC will take this type of offensive performance for the most part finishing with 52/47% splits and just 13 TOs, but the defense of course has to be a whole lot better if they want to actually make the playoffs in this brutal conference.

For SA, finally LMA had the night they pay him to have

OKC clearly didn't have an answer for Aldridge or really any Spurs player for that matter. They shot 54/45%, guys like DeRozan also got whatever they wanted

and if we're going to talk about how SGA is a future star at the point guard position, well the same thing absolutely has to be said about Dejounte Murray. Back from his ACL injury and looking like an absolute beast

I love his size at the guard spot, his defense is legit and he's developing as a passer which is a great sign for Spurs fans. You never know how guys will bounce back after tearing their ACL, but Murray looks better than ever.

We'll be talking about the Celts in their normal blog, but if you somehow didn't see the tribute for Kemba last night give it a watch because it was pretty awesome

great job by the Hornets and their fans for having nothing but class and showing the true love they have for Kemba.

For CHA though, that's pretty much where to good stuff ended. Tough to beat one of the best teams in the NBA scoring only 87 points and shooting 38/19% with 20 TOs and it's a little surprising because the Hornets had been playing well, winners of 3 straight heading in. Outside of Miles Bridges and Devonte' Graham nobody could really buy a bucket

and it was a disaster night for former Celtic Terry Rozier (1-11) and PJ Washington (1-8). This thing was pretty much a wrap after the first 12 minutes, and maybe this is closer to who the Hornets are than the team that had that little winning streak. I mean this is mostly a throwaway season and this night was more about the fans getting to show love to Kemba, so despite the loss I don't think there were any mad Hornets fans leaving the arena.

No longer can you say the words "well it was against the Suns who cares". Not after we on the internet collectively decided that the Suns are now good. That makes this a great road win for MIA who now has the second best record in the East and one of the best net ratings in the entire league, with the 2nd best point differential in the East. They are about as legit as legit gets, and that's not all just because of Jimmy Butler

I mean don't get me wrong he was awesome, but the thing with this MIA team is they are deep and he has a whole lot of help. He's surrounded with rim rollers and shooters and the early returns have been greeat

I have to single out Bam here though because here is a young big that is not getting nearly enough hype. A 15/10/6/5/1 performance in 35 minutes, Bam has 100% taken the leap this year. He's turned into one of the best passing big men in the entire league, he's a double double machine and as we know he can jump out fo the gym. If you want a reason why MIA may look this good this early, Bam has to be very high on that list. Great start to the year for him.

For PHX, speaking of big men taking a jump, Aron Baynes is most definitely taking things up a level compared to what we saw last year

Much like Bam, he's a huge part of their early success and is flourishing in this new role/opportunity which makes me happy and sad all at the same time because my favorite team misses him dearly. He's perfect.

You combine that with Devin Booker

a point guard in Ricky Rubio that actually knows what the hell he's doing, something PHX PG's in the past didn't

and suddenly you realize this team is pretty good and is doing all this without Ayton. Now the defense is a problem at times, I mean they gave up 124 points on 54/53% splits, that's not great. but outside of a rough fourth quarter they played MIA even for the most part and are no longer an automatic win on opposing team's schedules. The Suns play you tough and I have a feeling that's not going to change anytime soon.

Um, did we all overrate the Blazers? I know I certainly thought they would be much better than what we've seen tos start the year. But going on the road and your two best players combining to shoot 18-46, well what do you think was going to happen

this team looked absolutely terrible in the first half. No energy on either end, they scored just 42 first half points and it looked like we were in for a blowout. But then they came out firing in the third quarter, dropped 36 points and actually had a 6 point lead heading into the final 12 minutes. Guys like Hassan Whiteside woke the fuck up and it made a huge difference. Once they got to the fourth it was awesome to see 19 year old Anfernee Simons go nuts and pretty much shoulder most of the scoring load

but they couldn't overcome their 37/28% shooting, and when they needed to buckle down and get some late defensive stops, they couldn't stop Kawhi or Lou Williams. That's a problem.

For LAC, you may not believe this since he's recovering from a gruesome knee injury that prevented him from playing two nights ago, but Kawhi Leonard played a team high 33 minutes in this game and looked fantastic

he erupted in the fourth to pretty much carry LAC over the finish line and it was beautiful to watch. His midrange was flawless, he was attacking the rim at will, he was basically Kawhi Leonard. It helps when you get the type of performances the Clippers got from Lou Williams

and Harell who had 15 of his own off the bench. On a night where their starting backcourt shot just 3-9 this just goes to show you how deep the Clippers are, and they haven't even added Paul George yet. You have the best closer in the game in Kawhi, but you also have one of the best offensive talents and closers in the game in Lou Williams. Just an embarrassment of riches that are now 5-1 at home and very much the problem we knew they would be when Kawhi plays.

And that's it! You're now all caught up with everything that went down last night in the NBA. We're back at it tonight with a full slate of 11 games, so buckle up. Have a great Friday!