(Source)–Thrilled by the enigma of a famous video shot in Turkey over a decade ago, some internet dwellers processed it through a powerful stabilization tool, revealing uncanny images that could dazzle even sophisticated ufologists.

The mystery started back in 2008 when a Turkish night guard named Yalcin Yalman began videotaping bright, crescent-shaped objects that regularly appeared and hovered over the Marmara Sea near the resort village of Kumburgaz.

His pastime earned him fame as a UFO spotter, and his videos quickly went viral due to their authenticity confirmed by numerous experts and witnesses who saw the same objects at the time of filming.

The gear Yalman used wasn’t top-notch at all as the original videos he made were quite shaky. The quality and definition of the unstabilized tapes dropped significantly when zoomed in or out, which led some skeptics to suggest the UFO was actually a US stealth drone or other aircraft.

A couple things about these videos. Firstly, it was published by RT. AKA Russia Today. The news station based in Moscow. So you know it’s legit. Totally not a propaganda machine overseen by Putin and his henchmen to infultrate the English speaking world. You can trust. And two…the original video(above) came from Turkey. Here is the digitally remastered version

This is going to be like a KFC-Honduras type take, but I don’t care. When a UFO video comes from a country like Turkey I just believe it’s real. Like it’s Turkey in 2007. There is NO chance they have photoshop or CGI or computers or anything like that. How are they going to doctor a UFO video on a Gateway computer in an internet cafe? It’s impossible, which makes this video all the more authentic. Having UFO sightings all over the world make it seem more plausible. Why would all the UFO sightings be in the Southwestern United States? Wouldn’t make any sense.

When you clean it up and zoom in and you see their alien looking asses…I believe it yo. Plain as day. And you know what…it’s much sweeter than the video the Navy released 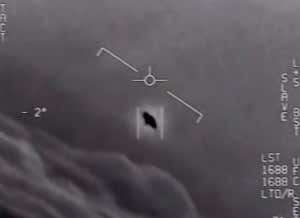 I love that the Navy says it’s real and they don’t know what it is, but I can’t get fully on board with this tic tac dot thing zipping across the screen. When you watch it you’re not wow’d by the aliens. It doesn’t look like anything that special. The Turkey video…that thing is what I had envisioned in my head. Saucer…check. Floating around…check. Aliens inside…CHECK. Best alien video on the internet right now. If it’s fake I don’t care. Aliens are real. Need more videos out there until people just accept it. That’s my official position.