Ugh, dang. I have plans that weekend! I'm pretty sure my nephew, who hasn't even been concieved yet, is having his 11th birthday party that Saturday. Which kinda sucks....because this would've been a great game to go to! Because this is honestly a heavyweight battle between two titans of college football. There's "big games" every weekend, but there's not really regular season match-ups like this.

But here's the thing: this would be one of the most anticipated games of the season.....if it were played in the next DECADE. I mean, the game in Columbus is 4,314 days away. I would say there's a better chance I'm dead than alive in 2031. Ryan Day won't be the coach at Ohio State. Kirby Smart won't be the coach at Georgia. And there's a chance that one of the two teams really isn't that relevant anymore. These teams should play next year, not next century.

Regardless, Big Ten Cat is already counting down to the countdown to count down.

I do not understand why schools feel the need to have schedules made up 10+ years in advance. I'm sure it has something to do with money in one way or another, but it just feels so simple to make a schedule every two or three years. It's like how we just played TCU last year. Was supposed to be a great game at the time of scheduling, turned out to be a pretty okay game when it actually came around.

Which brings me to my next point: I hope Georgia is still relevant in 2030. They need to hold up their end of the bargain to make this an all-time battle. I know Ohio State will. And they better....they're in for quite the primetime slate in coming years... 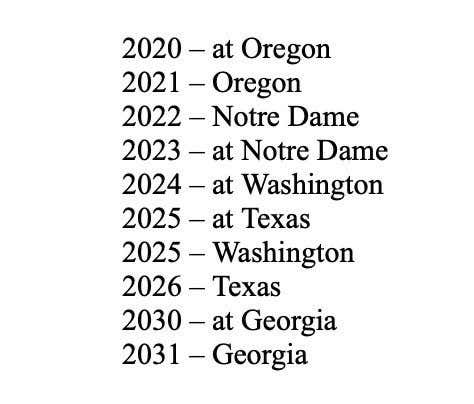 That schedule YUMMY. Why would you ever want to go anywhere else? And it's just another reminder that we'll play anybody, anywhere. I wish we could more of an emphasis on the anywhere part though. Bring an SEC school to Columbus in November!!! Georgia playing us in Ohio is a start. Next step: getting Georgia to come play us after the month of August...