10+ years of blogging is a long time — I've been looking for something to reinvigorate myself, get the juices flowing again, because nothing feels better than hunkering down and smashing the keyboard with a purpose. So I want to thank the NY Post's Steve Cuozzo for gifting me that renewed sense of purpose: first, with his incredible article on the death of the Manhattan Power Lunch, and now with his week-long pout-fest about the response he got for it.

First of all I hope Mr. Cuozzo didn't take it too personally. It's not like I was actually upset about his power lunch article. I just thought it was stupid and dumb. That's all. You write your opinions, I write mine, we all have a good laugh and move on. All part of the blog game.  I respect my elders, no matter what generation they're from. I respect them enough to politely tell them when they're being stupid and dumb. I hope the younger generations have the same respect for me too — judging by the amount of people on Twitter with their high school or college class of '24 in their bio who call me a fucking clownshoe moron, I think that's the case.

But anyway, like I said, I moved on. I didn't notice until recently that Stevie followed up his power lunch piece with something even stronger, something that led me to believe he wasn't having very much fun.

How millennials' "extreme hatred" for boomers is TOTALLY unjustified.

(Yikes on that ratio) 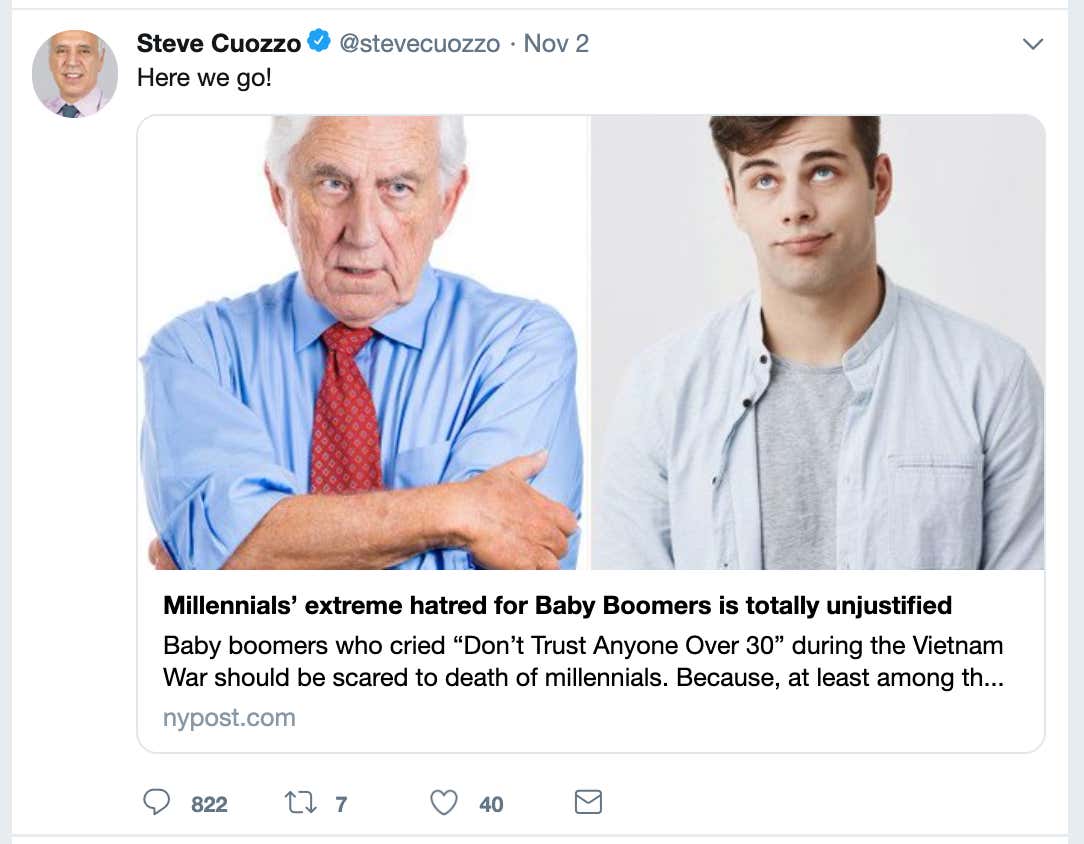 Let me run through this real quick.

Baby boomers who cried “Don’t Trust Anyone Over 30” during the Vietnam War should be scared to death of millennials. Because, at least among the Twitterati, they hate us — they really, really hate us.

Last week I took a beating from younger readers over an essay I wrote lamenting the decline of the “power lunch.” Although it only partly blamed the phenomenon on millennial habits — e.g., preferring avocado and kale to beef and baked potatoes — hundreds of thousands on Twitter either posted or retweeted such insults as “Old man yells at lunch table” (I’m 69), “What’s it like to be an antique?” and “We’re the ones doing the actual lunches while you’re having three-martini lunches.” [NY POST]

You're welcome for the hundreds of thousands of engagements. That probably got you a performance bonus. How many 69-year-olds are getting 100K+ responses to their articles on social media? The Post is lucky to have you sir.

But what's up with all this "EXTREME hatred" stuff?

…The phrase “OK BOOMER” has now become young people’s “repeated retort to the problem of older people who just don’t get it,”

Jeez buddy. Think you're taking things a little too hard here. I like Boomers. My parents are Boomers and I like my parents. Just because you wrote a dumb lunch article out of nowhere that made zero valid points and actually contradicted the one semi-valid point you almost made doesn't mean I "hate the air you breathe." Relax!

The next paragraph is why everyone shit on you in the first place:

Too many millennials whine that their complacent elders bequeathed them a rotten America and a rotten world — economic malaise that will leave them with lousier lives than their parents and a planet on fire from climate change. But if they spent more time studying actual history, which can’t easily be found on iPhones, they’d know that boomers were, and remain, the most socially and environmentally conscious generation America ever has ever known. Maybe too much so — our universities’ overwhelmingly “progressive” agendas originated in the 1960s and have become more dominant ever since.

It can easily be found on an iPhone actually. The iPhone is linked to the internet, which is a global system of interconnected networks containing all of the information in human history. Do you think that like, libraries and newspapers have more easily accessible resources about history? Maybe people wouldn't make fun of Boomers so much if they didn't say things like this. Just my opinion.

I do agree with the rest though. Millennials complain WAY too much. But everyone complains way too much to be honest. That's not a generational thing, it's just that we live in a society of complainers. Every old person on Twitter complains about the President and politics alllll dayyyyy everrrryyyyy day. But yes, millennials are the worst culprits. That's not a secret to me. There's not a lot of personal responsibility out there these days. Did you see my rantings about Toad Boy yesterday Steve? I think that's a millennial that we can find some common ground on actually. Fuck Toad Boy.

And I'd love to give you the benefit of the doubt, but I can't help but read this as insanely condescending:

Plenty of ambitious, future-focused millennials work their hearts out at taxing, low-paying jobs. But many “working” members of their generation wear their resentment on their un-ironed sleeves.

They’re out to lunch in a different way. They seem allergic to using the phone, or even waiting on customers. A stoned Starbucks clerk, after asking me to endlessly repeat my order for a grande coffee, then repeating it to himself, asked me, “What were you having?” The zoned-out guy at Duane Reade took a $5 bill from me and inexplicably asked me what my phone number was — to the amused tittering of decidedly older customers in line behind me.

Why is "working" in quotes? People earning a living at Starbucks and Duane Reade aren't deserving of just work, they "work"? Because one of them spaced out for a second? (He asked you for your phone number because that's how you get rewards at Duane Reade dipshit. Fuck him for trying to save you some money right? Maybe the people behind you in line were tittering because you paid with cash like an asshole living in 1997 and held everyone up while he had to count out 92 cents in change.)

Maybe today’s young workers who resent lunching at their desks would prefer busing tables in a high-volume steakhouse under merciless, slave-driving owners, as I first did when I got out of college.

I bussed tables from the day I turned 15 until I switched to barbacking at 17. On my off days I mowed lawns and did landscaping. So did every single friend I grew up with.  My first job out of college was making $25K living in NYC. Unfortunately that turned into an internet empire so I didn't have to get a steakhouse job.

Our bosses fed us sandwiches before a 10-hour shift that included no lunch or dinner break inside or out — and for sure, no martinis.

Buddy, you're the one who wrote the power lunch article. You're the one who talked about millennials ruining your view of the water while you sipped California chardonnay with bankers and the Hollywood elite. It's not like we just accused you of drinking martinis at lunch out of nowhere. You were literally bragging about it, boomer.