Perhaps it's a lack of sleep right now. Perhaps I'm just in a good mood with Kentucky beating Michigan State last night. But I'm actually not mad at LeBron here. I actually have a bit of respect that he chimed in with a not corny, not over the top chirp at a fan getting on him. That's a huge step for LeBron. Maybe it's just low expectations to where I think he's going to use something involving Taco Tuesday in his chirp back.

But here's the other thing. LeBron just needs to embrace that he's a villain. If he does that people would respect him more. He tried to do it at Miami and failed. He hated being the villain. But he's older now. You're with the Lakers. You have that elite teammate in Anthony Davis. Just be the villain. Yell at fans. Hell Space Jam 2 should be him on the Monstars instead.

Which is why this rebuttal was so great. Simple and to the point. Telling a guy that their significant other is embarrassed without pointing out exactly why is a bit ruthless. That guy is probably sitting there trying to figure out if it's his looks, his actions, something specific about him.

Plus, they kind of deserved it. Whoever was screaming 'AD' non stop sucks. Don't sit there and scream someone's name over and over again. Kind of hilarious security came over though and yelled at the dude in the backwards hat.

PS: Boogie and Anthony Davis had a great look 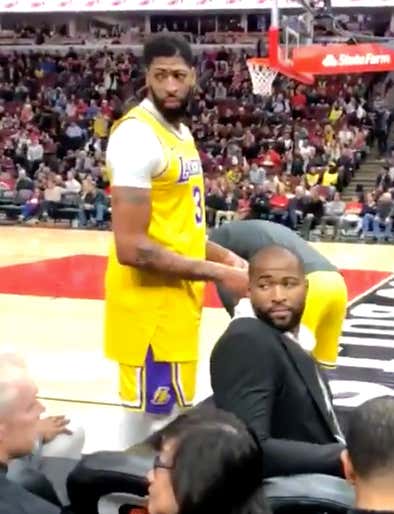