It's that time of the year, folks. The time where you are looking to start that magical ticket run and cash it like we did with Nova (25/1) 2 years ago and Virginia last year (18/1). We'll see if we can make it a three year run and there is plenty of good value out there.

We'll set it up this way. We'll run through my favorite bets to make, I like taking a shot on a couple of teams for futures. We'll run through those I want to fade and why. We'll also take a look at three conference championship bets that are worth taking. All numbers come from our friends at PointsBet.

If you're in NJ, sign up with code BARSTOOL and when you deposit your first $10, get $100 in Bonus Bets

Feel free to fade as normal. Like someone I don’t have out there? Let me know too. 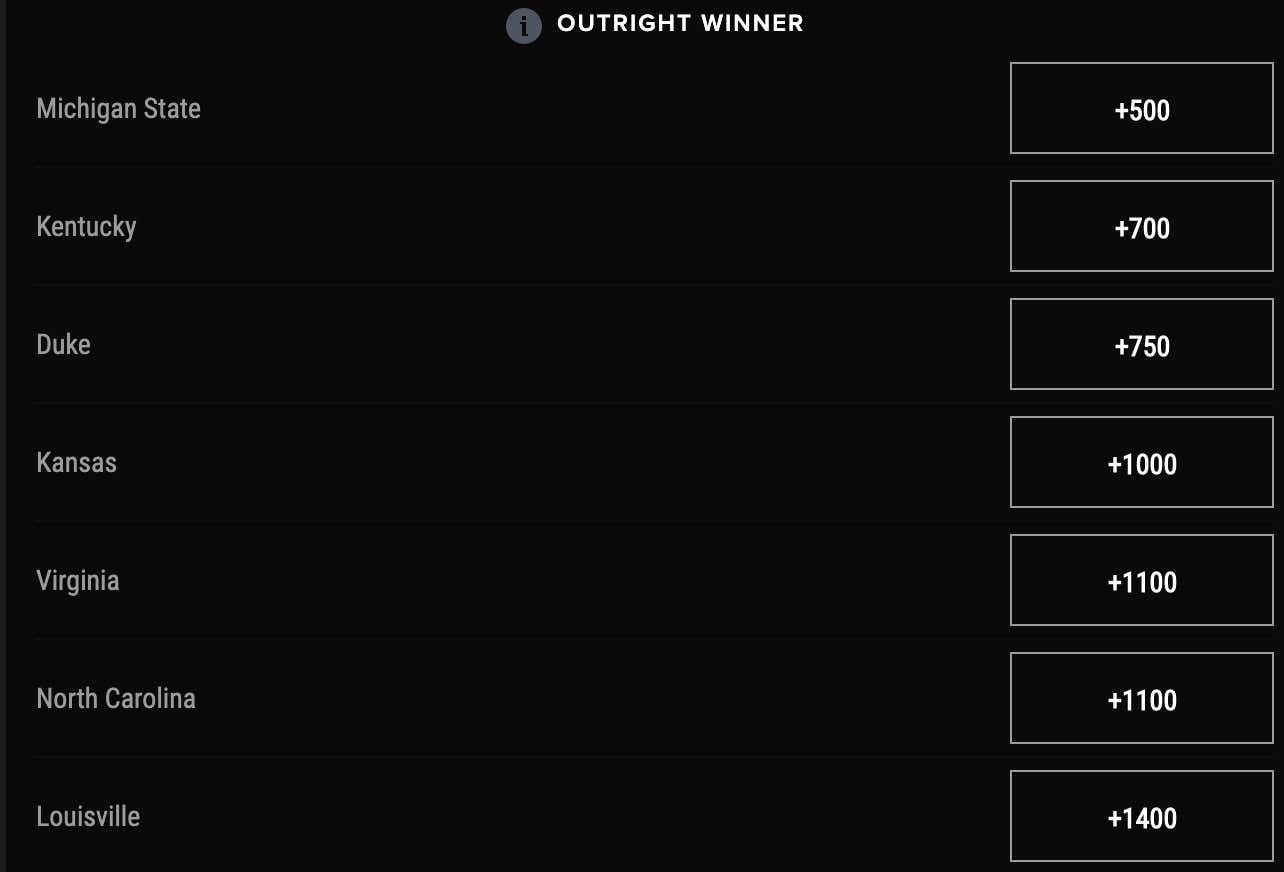 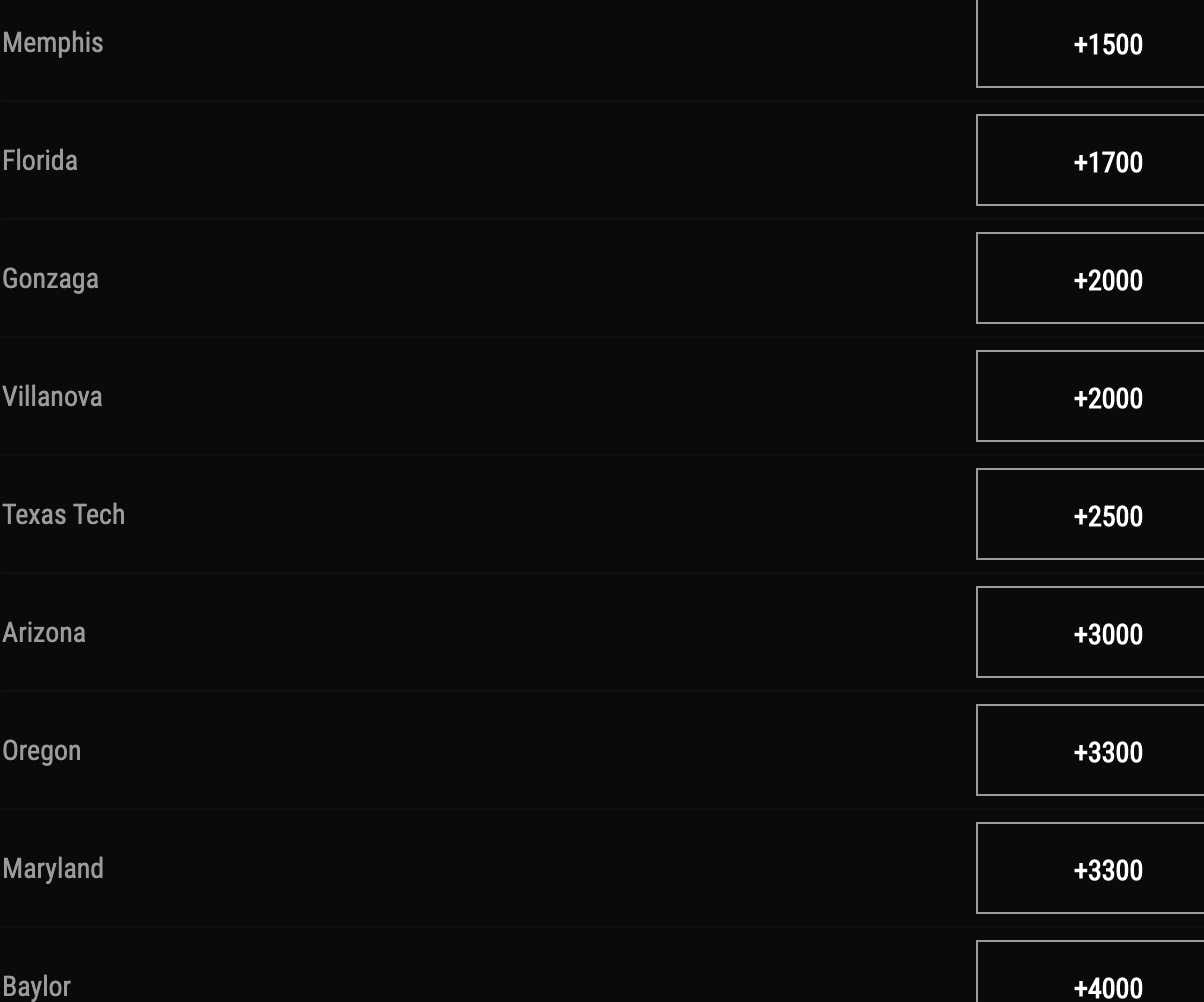 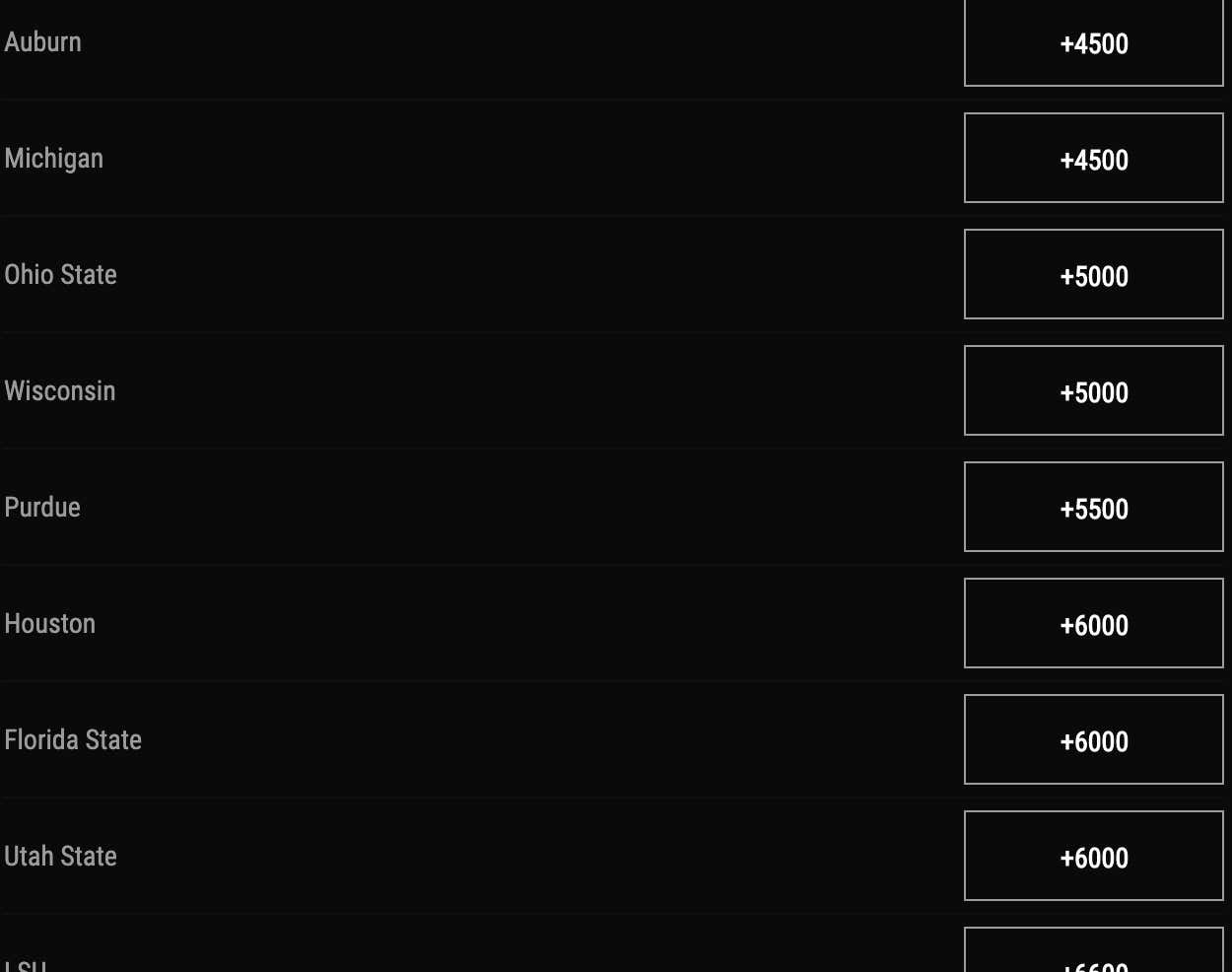 Kentucky (+700/+130 to make Final Four) - I'm buying into this team. Now, I don't love the price at 7/1 and you can possibly wait to see if it drops. I just don't know how much more value you'll get from this team. This is a different Kentucky team than years past. They don't have that dominant big man and they can get real versatile with their lineups. That's where it starts and ends for me. If Cal is willing to change to a more modern style of play, this team is the best team in the country. They have shooting, they'll defend their ass off (projected No. 1 defense on KenPom) and they have plenty of guard depth. Look for Tyreese Maxey to be an All-American and Immanuel Quickley to take a jump.

Louisville (+1400/+325 to make Final Four) - I hate to say this, but Louisville is a goddamn good team this year. Getting them at 14/1 seems like a steal for a team that I have as the 3rd or 4th best team in the country. They return Jordan Nwora who is an All-American. They do have to figure out the point guard spot a bit, especially with Fresh Kimble transferring in. They have plenty of depth and experience. I'm also just a huge Chris Mack fan. The dude knows how to coach. Take the best team in the ACC at 14/1.

Florida (+1700/ +400 to make Final Four) - If you were smart and paid attention over the summer, Florida was 50/1. Look at this drop! All because of the addition of Kerry Blackshear, who I like and is good. But it's wild to see how much people fell in love with Florida over that addition. For me? It's Andrew Nembhard. That dude is one of the best point guards that people aren't talking about enough. They return their backcourt, both freshmen last year. They can spread you out and shoot the ball. 17/1 is great value for them.

Ohio State (+5000/ +900 to make Final Four) - I'm not quite sure why Ohio State has these long odds. Kaleb Wesson has a legit chance to end up on an All-American team. Chris Holtmann is a top-15ish coach in America.It all comes down to whether or not freshman DJ Carton lives up to the hype. If he does, these odds will drop FAST.

Houston (+6000/ +1000 to make Final Four) - You can still get Houston to at these odds with Quentin Grimes being granted a waiver? Sign me up. We saw what Kelvin Sampson can do with a talented backcourt, a 3 seed last year. Sure, they lose some guys but I'll take my chances on this sort of odds with Grimes and DeJon Jerreau.

LSU (+6600/ +2000 to make Final Four) - Yes, Tremont Waters and Naz Reid are gone, but there is way too much individual talent here for me to not take a small shot on LSU at 66/1. Emmitt Williams is one of the best rebounders in the game. JaVonte Smart can be a lead guard. Skylar Mays has experience and can score. Again, I just love the individual talent for a longshot here.

Michigan State (+500) - I'm officially here on team Fade Sparty. Don't get me wrong, they are good. But they aren't this clearcut favorite at 5/1. Don't want to take them for that. Joshua Langford is likely not playing this year. They have a lack of depth in the frontcourt. Yes, Cassius Winston is likely winning POY, but I'm fading MSU at 5/1 in a one game and advance scenario.

Duke (+750) - I'm out on Duke this year. They just don't have a roster that makes sense. Tre Jones, love his game, but he needs to figure out his jumper otherwise we're going to see teams guard him like UCF. Then there's the fact that they have to decide whether they want someone who brings offense and a lack of defense or vice versa on the wings with guys like Cassius Stanley, Wendell Moore, AOC, Jack White, Joey Baker, etc. The pieces don't fit. I'm full fade Duke this year.

Virginia (+1100) - What made Virginia so damn good last year and why we kept taking them to win It all was the fact that De'Andre Hunter could play the small ball 4 and Ty Jerome is one of the best PnR guards in the country last year. They are gone as is Kyle Guy. Plus, it's really fucking tough to go back to back.

Memphis (+1500) - You could have had them at 50/1 over the summer. Now everyone is on the Memphis hype train. I get that they have James Wiseman coming in. But this isn't a monster recruiting class like we've seen Duke and UK get in the past. It's a solid one, with a handful of guys that will help build the program. 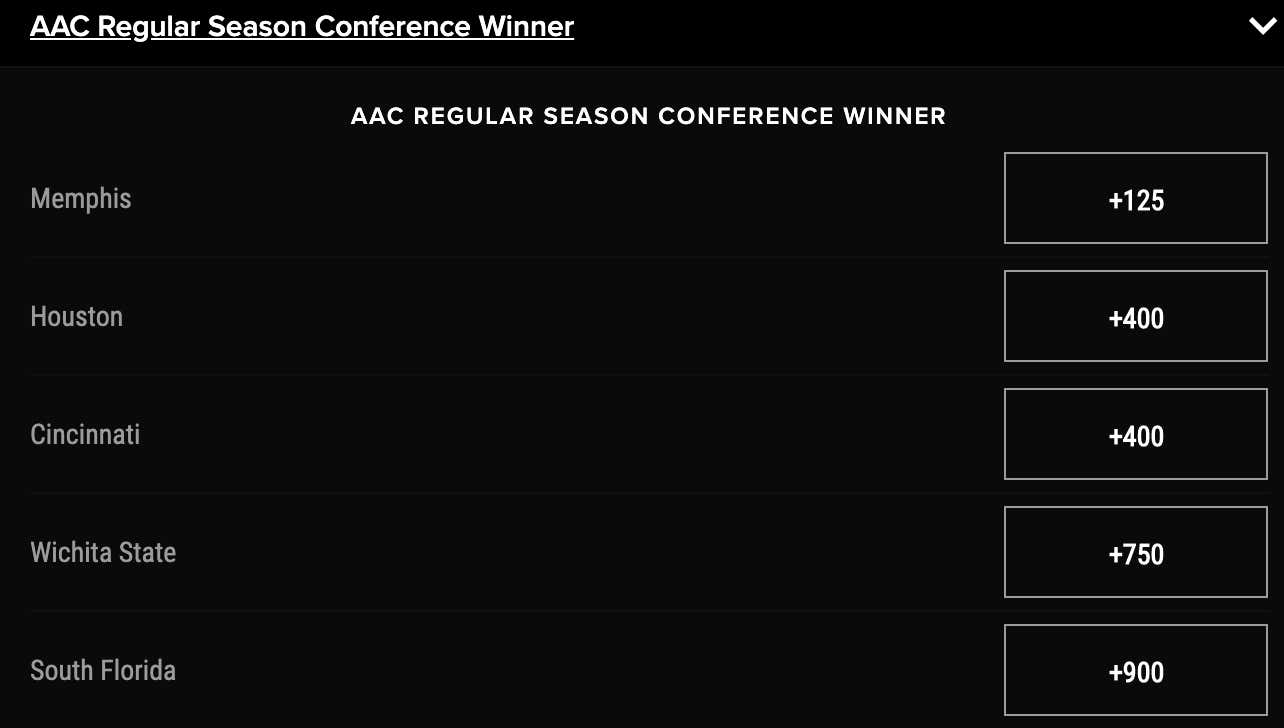 Houston (+400) - As I mentioned above, I like Houston a lot this year. They have 4/1 odds to win the title in a year where Penny and his guys have to adapt to the college game? I'll take my chances here. Plus, Memphis ends the season at Houston? With a chance to win the conference? Go Coogs. 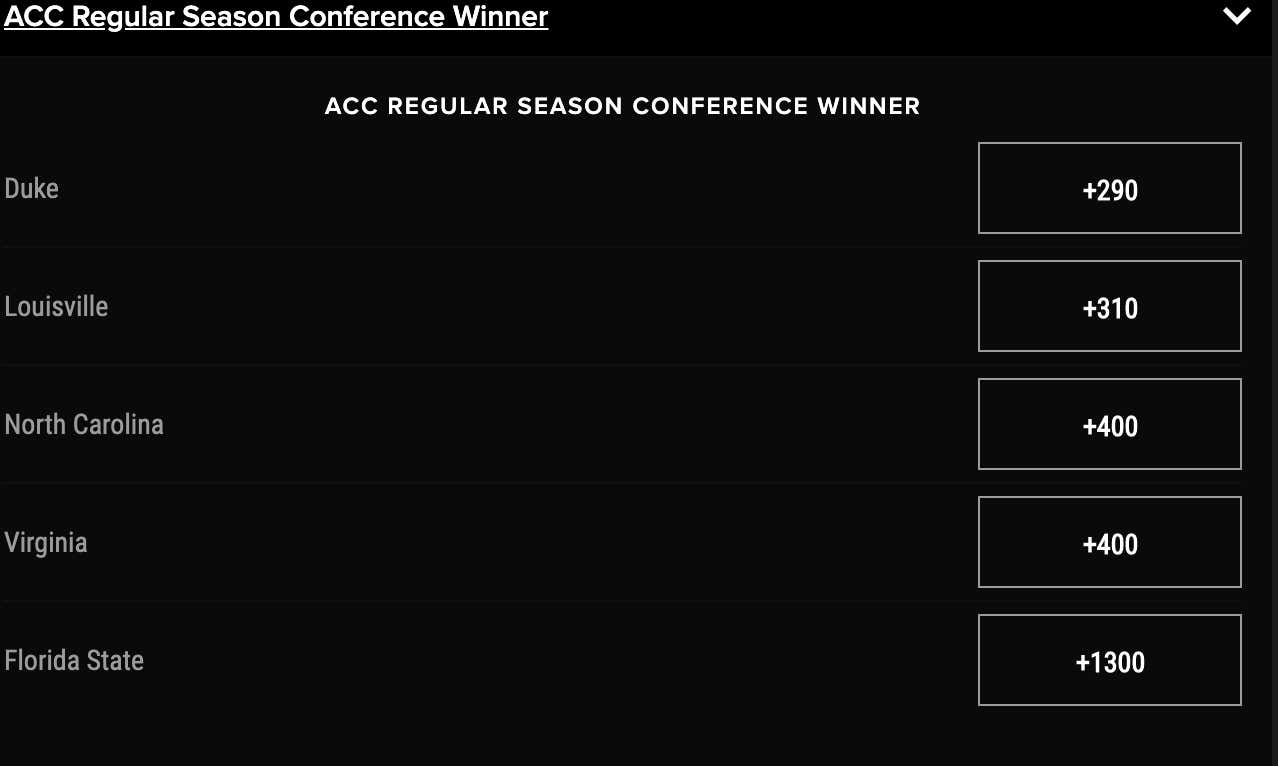 Louisville (+310) - I love the way the schedule breaks for Louisville here and that's half the battle in these monster conferences. The teams Louisville has to play twice in conference? Pitt, Miami, Virginia, Florida State and Clemson. That's a huge advantage. I already think they are the best team in the conference, so take them at +310. 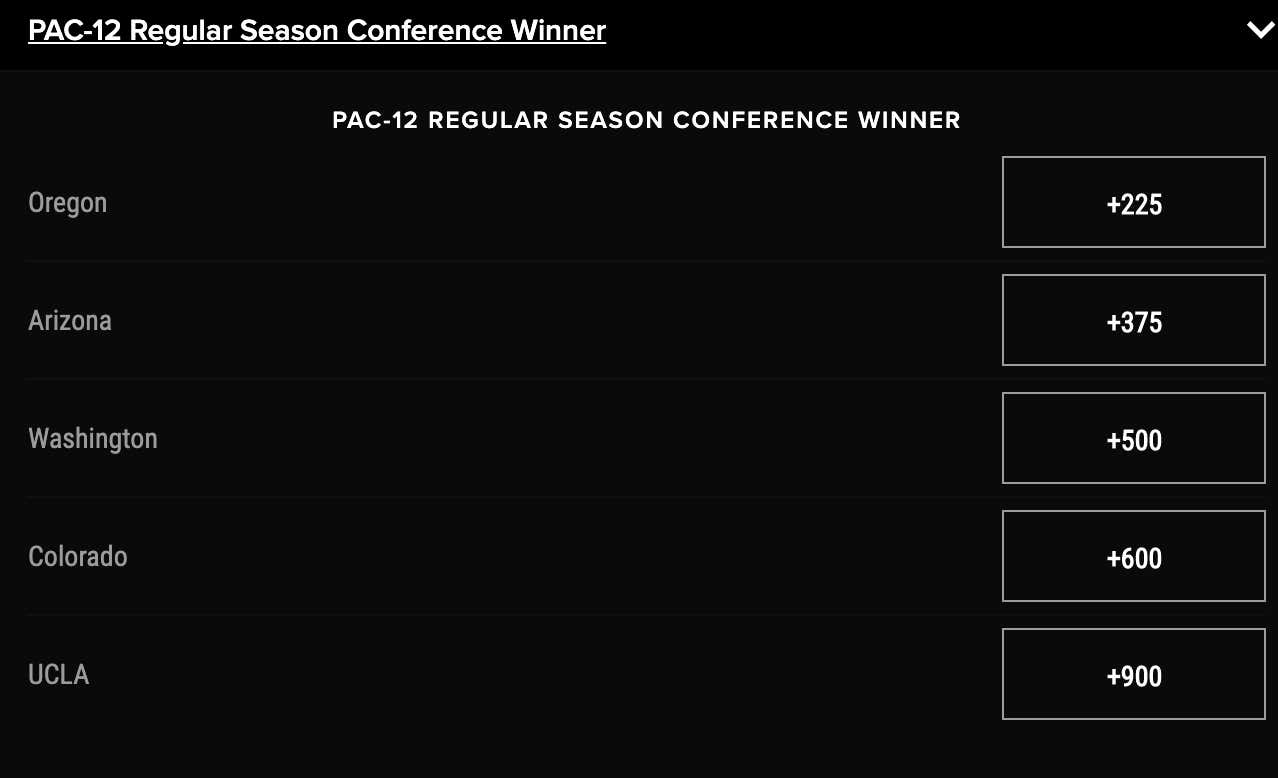 Arizona (+375) - It's a 4-team race out west with Oregon as the favorite and then Arizona, Washington and Colorado. Arizona just found out Kentucky transfer Jemarl Baker is eligible to play this year, adding depth to the backcourt. Throw in the star in Nico Mannion and experienced big guy in Chase Jeter, I like this with Oregon battling N'Faly Dante out for the first semester. I also really like Max Hazzard as a transfer here. Keep an eye on him as an All-Conference type player.

TERMS AND CONDITIONS APPLY. VOID WHERE PROHIBITED. MUST BE 21 OR OLDER. GAMBLING PROBLEM? CALL 1-800-GAMBLER.