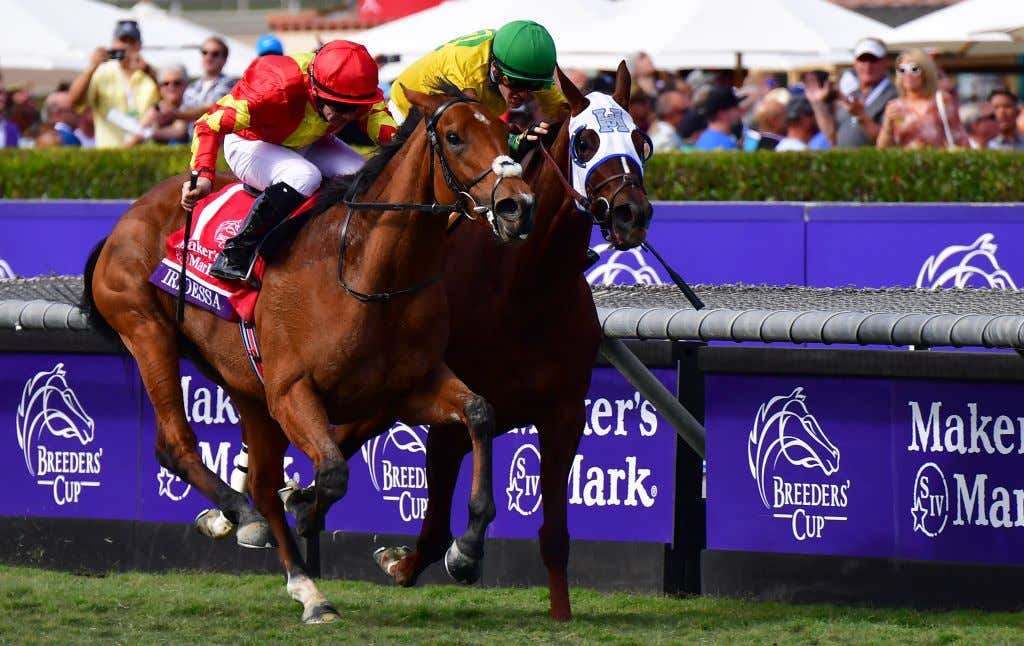 Let me start by saying, I’ve had an amazing time at the Breeders’ Cup over the last couple of days. Santa Anita Park is one of the more spectacular places, race track or otherwise, you will ever see. The beautiful course is highlighted by the backdrop of the breathtaking San Gabriel mountains. The facilities are updated but maintain an “old Hollywood” feel to them. It is a uniquely awesome place to spend a day.

Paul Lo Duca and I have been at the track all day over the last three days, enjoying great hospitality and spectacular racing by some of the world’s best race horses. Breeders’ Cup weekend, for those who may not know, is one of the biggest weekends in the sport. The best horses from the world over come to this event to run in their chosen specialty race and compete for massive seven figure purses. Winning a Breeders’ Cup championship is not only about the money in the purse, but when breeding rights are sold it is a huge feather in your cap. It’s as big a deal as there is in horse racing outside of the Triple Crown.

This weekend the event was held at Santa Anita Park and everyone reading this is surely aware of the issues that have plagued Santa Anita this year. I’m talking, of course, about the deaths. So many deaths at the track over the last eleven months. And then yesterday, in the Breeders’ Cup Classic, the main event of the weekend, Mongolian Groom went down and was euthanized shortly after the race with two broken bones in his left hind leg.

It is tragic for the horse, his connections, the jockey, the trainer, the racetrack and for racing fans. We are now left wondering what the state of racing in California will look like, instead of celebrating what was otherwise a great weekend for the sport.

Let me be clear, I love horse racing. It is probably the first sporting event I ever attended, it is certainly where I learned how to gamble. I remember being a little kid and going to Belmont or Aqueduct with my Dad and Grandfather and learning how to read a racing form and learning what the different bets were. I think a lot of people have a fondness for the sport once they are exposed to it. Race horses are generally quite expensive to buy, care for and maintain, thus they are actually treated very well. If you doubt that, go to a horse farm in the suburbs of Lexington, Kentucky. I went to several of them this past April and the way the horses are cared for is exceptional. Horse racing has been around for hundreds of years and I hope it survives hundreds more.

But what to do about Santa Anita? I’ll be honest, I was not the biggest supporters of what was being done by the owners of the track, The Stronach Group, when they made reforms earlier in the year. I didn’t feel like they were adequately addressing the issue. After being around the track all day for three days and talking to dozens of people that work at the track, for the track or around the track, I have to admit I was wrong. I have heard of numerous horses, some from very acclaimed trainers, being scratched by the track administration because the veterinarians did not deem the horses fit. The cut backs on race day medication and medication in general is essentially leading to the cleanest racing in North America.

The fact that the administration of Santa Anita is willing to possibly upset high powered trainers tells me that they are looking out for the best interest of the horses. Hearing everything I have heard over the last few days has changed my mind on how the track is operated and the reforms instituted. I think Santa Anita has taken a progressive approach and I applaud them and their ownership for doing whatever they can to make racing safe.

So, what to do then? The answer is unfortunately, there isn’t a lot we can do. We can make racing as safe as possible. We can have better drug testing. We can have better vet inspections. We can make sure the track surfaces are at their peak. But honestly, Santa Anita is already doing all of that. Now they are even considering spending upwards of $40 million to install a synthetic track surface, all in the name of safety. That, honestly, may be the biggest thing we can do at this point. Maybe we should phase out dirt racing in America. Switch to a synthetic surface or a Tapeta surface like is used at Woodbine, in Toronto. Either way, we should certainly investigate the effects of switching to synthetics, or strictly turf, will have on horse safety.

The cold, hard reality is that sometimes accidents happen. Thoroughbreds are thousand pound animals that live and run on legs that are wildly thin compared to the rest of their massive frames. Sometimes, unfortunately, those legs give out. When that happens, there is almost nothing that can be done. The horse cannot be supported by three legs, and there is no way to immobilize the injured limb for it to heal.

It is tragic when it happens, there is no doubt or argument about that fact. When it happens it gives every racing fan a knot in their stomach. But what is the alternative? If we ban horse racing, the breed of horse known as the thoroughbred will essentially become extinct. Those animals are born to run. They want to run. If we don’t have horse racing, they will have no need to be bred. Also, we will lose thousands and thousands of jobs. Not just people working at race tracks. The farms. The breeding industry. The after-care industry. The economy of a place like Lexington, Kentucky is hugely dependent on horse racing. Banning racing would ruin it.

We live in a society where it is easy and almost expected to react to things instantaneously and extremely. Sometimes it is best to take a minute, catch your breath and think about what you’re going to do before you act rashly. I would urge the people who want to ban horse racing in California and other places to think about it. I would urge Governor Gavin Newsome, to think about it. If you want to ban the sport, what should the people that run Santa Anita have done differently? What action should they have taken that they have not? I don’t think there is one that will be named.

Let’s continue to make horse racing safe. We should continue to improve drug testing so that people seeking to cheat cannot drug unfit horses and risk their health. We should continue to have veterinary testing and inspections before races to ensure soundness for racing. We should also continue to examine the different types of surfaces and what is safest for horses and jockeys. We should do all of this and more. What we shouldn’t do is lose a beautiful venue like Santa Anita or a spectacular celebration of the sport like the Breeders’ Cup because of what has happened. Let’s keep working to make horse racing safer and better for everyone involved rather than throwing the proverbial baby out with the bath water.