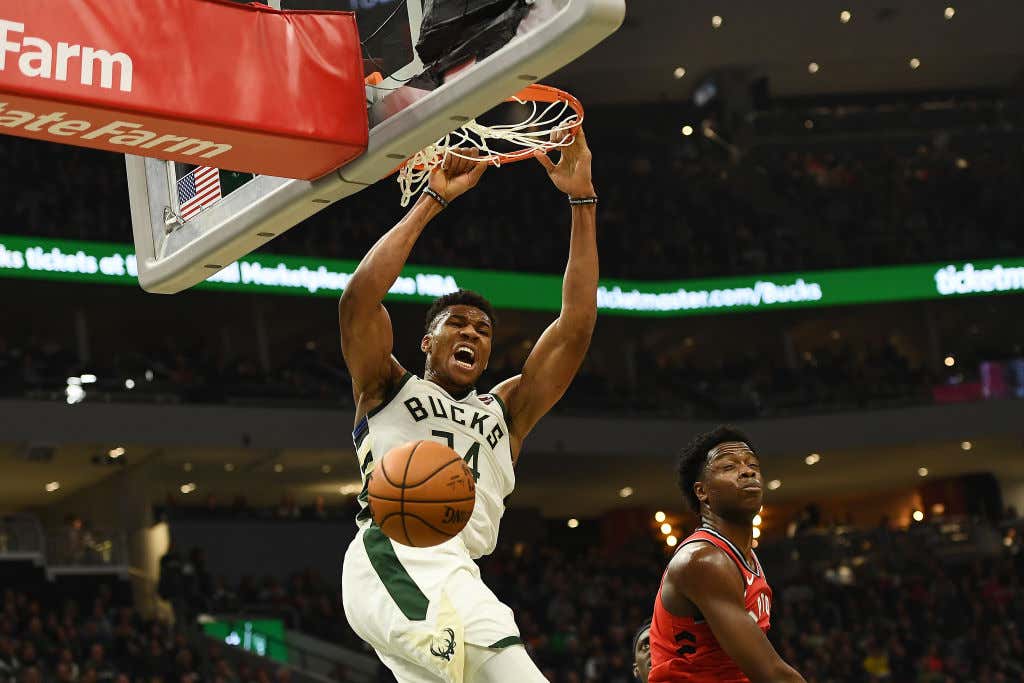 Good morning everybody happy Sunday and welcome back to another edition of Last Night In The NBA where we bring you up to speed on everything that went down from the night before in the Association. We had a total of 8 games last night and only three of them were decided by 10 points or more so as you can expect it was another night filled with high drama and crazy finishes. If you were watching football or maybe you know you were actually social and went out to a bar or something and missed all the action, here's what happened.

Maybe you thought that after beating the Nuggets the Pelicans would use that win as some sort of momentum builder, but as we are quickly learning this season despite their plethora of young exciting talent, it's really fucking hard to win in this conference. It doesn't help that Brandon Ingram only played 13 minutes before leaving with an injury since he's their #1 scoring option and it was clear they missed his production. No starter finished with more than 16 points and while that's perhaps a little discouraging, at least Pelicans fans can celebrate how good Jahlil Okafor has looked to start this season

but hey, with no Zion, essentially no Ingram and then no defense all mixed in, I'm not sure what you expect to happen.

For OKC, they are one of the teams so far that might be a little better than their record indicates. This isn't your normal 2-4 team, their defense is among the best in the league and if they continue to get these type of performances from SGA then they are going to be a bitch to play all year

and how about rookie Darius Bazley? The balls to make fun of Kawhi one night, and then last night he's looking aggressive, he's making threes all in one of the best performances off the bench

OKC essentially led the whole way, and you have to admit their young talent looks pretty impressive to start the year.

Hey did you know this was the third career triple double for Kyrie? So cool!

I'd say as a Nets fan focus on that instead of the reality that your Kyrie led team is 2-4, he's already acting weird and wouldn't you know it someone was a little unhappy he didn't get the last shot

Another night with Kyrie leading the team in FGA that resulted in a loss to a team BKN should be beating. Can't say I'm surprised. A quick look will tell you BKN is currently 12th in the East giving up the 2nd most points a night in the entire conference. The fancy dribbling though!

Who cares that Prince had 20 points on 7-12 shooting, or that Joe Harris was 7-10 with fourt threes. Kyrie was 8-21 missed every three he took but god forbid a teammate have a chance to be the hero.

For DET, some absolutely MASSIVE free throws from Andre Drummond . That's a sentence you don't see very often considering he's like a career 44% FT shooter or some shit

This was his second consecutive 20/20 game, and he was 2 rebounds and 1 FGM away from it being his third straight. That's pretty fucking ridiculous and why he's most likely going to get a max offer this summer from DET. For them to be stayed afloat all without Blake Griffin who is set to return soon is pretty big, and it helps when then big man get's some support

A huge 3rd quarter is what finally changed things for the Pistons, who then went bucket for bucket in the fourth to hold off the home win.

This game was a great example of what it's sort of like to play the Magic. You wouldn't think it but it doesn't matter what your offense is, they can make things extremely tough for you. After MIL tore them a new asshole it was good to see them get back to their defensive roots, and also nice to see Aaron Gordon finally show a pulse

I give the Magic credit, despite shooting just 43/20% they certainly hung around, cutting the lead to around 4 on multiple occasions. We also saw Markelle Fultz start this game and not look half bad

and the tough part was just their 2nd and 3rd quarters where they scored a combined 37 points. That's not going to cut it against a team like DEN. But the good news is their defense is legit, they're giving up the fewest points per game in the East and they are still long and athletic as fuck which means if their offense ever comes around they'll be just fine.

For DEN, their coached called them out after getting dick stomped by the Pelicans and while this wasn't exactly the type of performance you brag about given the 37/32% splits, I imagine Malone will take what he can get

The Nuggets don't win this game without a crazy 39-11 FTA difference which you don't really see on the road, but that was huge because they got basically nothing from their second unit and had to come back from 9 early due to their horrific shooting. Credit them for finding a way to get it done.

OK so on one hand you're playing the Wizards who last time I checked are giving up on average around 1 billion points a game. Scoring a shit ton against them is pretty much the norm. At the same time this in MIN without KAT so what business do they have not just winning but scoring 131 points. That makes no sense and pretty much sums up the Wolves season so far. Makes no sense

They shot a ridiculous 54/43% with 17 3PM. Jarrett Culver had one of the best performances of his young career off the bench with 20 on 8-17, the starters were balanced with nobody taking more than 16 FGA, and wouldn't you know it they actually played some defense, turning in a 36-16 third quarter that really opened this game up. I don't think ANYONE had MIN to start 4-1, yet here we are.

For WSH, whatever they stink, the team shot 38/34% with 17 TOs but at least Bradley Beal and Isaiah are getting bucketsPhPh

Same thing here, we all know the Grizzlies stink and are going to lose a lottttttt of games. But the Suns just keep on winning! Aron Baynes is putting up one of the most dominant seasons of any player in the entire NBA. Aron Baynes! My guy!

The sign of a good team is you don't lose to dogshit, and the more and more we see PHX play while it may be a little bit too much to say they are a "good team", I think you have to give them credit and say they are at least no longer a dumpster fire. Baby steps. They for sure are one of the biggest surprises of the season and they are getting production from pretty much everywhere

When have we ever seen this team go 50/42% with 14 3PM, play some actual defense and not have to rely on Devin Booker to score 70 points just to compete? Hell of a job so far by Monty Williams and you can no longer talk about the Suns as a pushover team. They are legit and can beat anybody on any given night.

Brandon Clarke too, so despite the tough loss at home at least your young guys are transitioning pretty well to this level

You think Giannis was a little motivated to have some payback against the team that sort of figured him out to end the ECF with four straight losses? I'd say so

This was your typical Bucks performance with your Giannis dominance and then balanced scoring with almost every bench player playing well. Luckily off nights from Bledsoe and Middleton didn't cost them, although it almost did. A 40 point quarter for the Raptors in the third made MIL sweat this out a little bit, especially considering they got off to a 19 point lead after the first quarter. As we know this team is a wagon when playing at home, and TOR learned that maybe it's a little harder to stop Giannis when you don't have Kawhi at your disposal

For TOR, Kyle Lowry kept them in it

but they really needed a big night from Siakam (7-19) and honestly ANYTHING from their second unit which struggled. Ibaka led the way with 10 but shot just 3-10 from the floor which certainly won't get it done. They were able to figure out their defense in the second half after giving up 66 to start, but to beat MIL on the road you basically need to be perfect so it's not a shocked TOR came up short with this type of performance.

Is it a little mean to be picking on the Warriors who just lost Draymond Green with a torn ligament and now they can't even beat the HORNETS? Fuck no. This is what you get for dominating life for the last 5 years. The rest of us are going to dance on your "temporary" grave. Can't beat the goddamn Hornets? Don't talk to me about roster talent the Hornets are barely an NBA team either and you can't beat them at home? I thought Steve Kerr was a great coach?

I mean at this point the Warriors have to be the favorite for worst team in the league right? Get down by 30 on multiple occasions and now this? Woof.

For CHA, look you take any win you can get and at 3-3 they are off to a much better start than most thought. Rozier and Bacon led the way

and honestly all you need these days to beat GS is to have two guys play well and that's what CHA got. Who cares that they only shot 42/17%, you can get away with that and still win when you are playing a team who is allergic to wins.

Game of the night for sure coming from the only undefeated team in the NBA. It's a great sign that you can be without one of your best players, head to an arena that is tough as hell to play in, and somehow, someway find a way to pull out a win. Especially when they just hit a dagger three to go up 2 with 2 seconds left. This is what good teams do, and there is no arguing how good the Sixers have started the season

They stole this win, but they got it through legit late game execution from guys like Horford and Tobias Harris which was big because clutch situations was one of their question marks heading in. Not to mention two GIGANTIC FTs from Ben Simmons in the closing seconds, great road win and like I said you win games Embiid misses that's just playing with house money.

For POR, you fools. You wasted some great Dame and Rodney Hood production

and that Anfernee Simons three should have done it

but just like it so often does for this POR team, they got killed by their defense. You can't be giving up this many points in regulation at home to an Embiid-less team. You just can't. You play in a stacked conference, these are the games you need to win. Shitting your pants in the fourth quarter in which you lost 37-26, well what do you expect to happen.

They basically didn't run an offense for the last 2ish minutes of this game, it allowed PHI to hang around and next thing you know you're late off a screen and you give a three point shooter a clean look to win the game, which he did. Brutal.

And that's it! You're now all caught up with everything that happened last night in the NBA. Hopefully this helps your hangover, have a great Sunday!